While Dark Mofo’s winter solstice events populate many above-ground sites across Hobart, its heart of darkness will always be the subterranean galleries of the Museum of Old and New Art.

The museum just got a lot bigger with the opening of a $27 million extension housing four major new artworks from renowned contemporary artists. The works – by Alfredo Jaar, Ai Weiwei, Oliver Beer and Christopher Townend – have been unveiled in time for this year’s festival, in conjunction with a new temporary installation by Berlin-based Simon Denny.

These new commissions contribute to an already impressive collection of art. The physicality of the newly excavated spaces adds a compelling dimension, and the new works offer immersive and interactive ways of engaging with some of the darker questions of our times.

The extension is called Siloam, after an ancient water channel built in Jerusalem. As visitors traverse its tunnels, hidden movement sensors activate Townend’s sound installation, Requiem for Vermin. Comprising 230 speakers, the composition has been configured to flood the senses with harmony and texture and trick the brain into hearing what is not there, like full orchestras, choirs, and piano and sounds from nature. 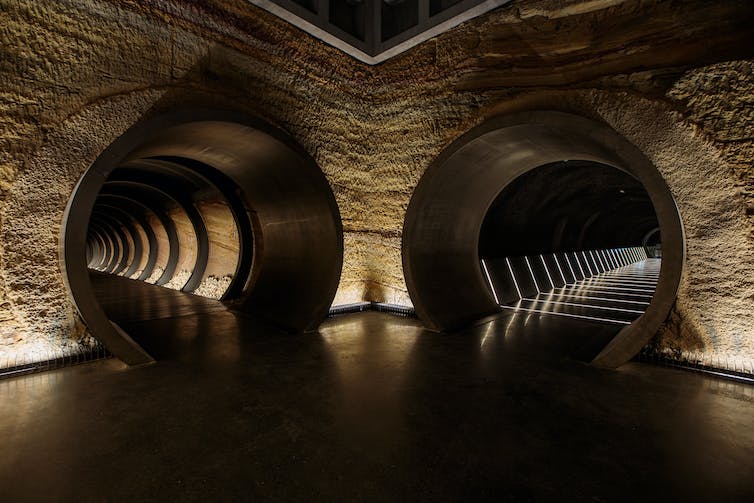 Accessed via a tunnel and operating at a scale reminiscent of large caves in Vietnam and Cambodia, where temples were secreted to avoid the bombing raids of the American war, Ai Weiwei’s White House offers sanctuary from the visual and sensory bombardment.

The artist uses industrial paint to recuperate a Qing Dynasty home that was scheduled for demolition. This massive ready-made is supported on clear, crystal orbs that absorb and mirror the surroundings, offering a fluid, milky abstraction when viewed from above. 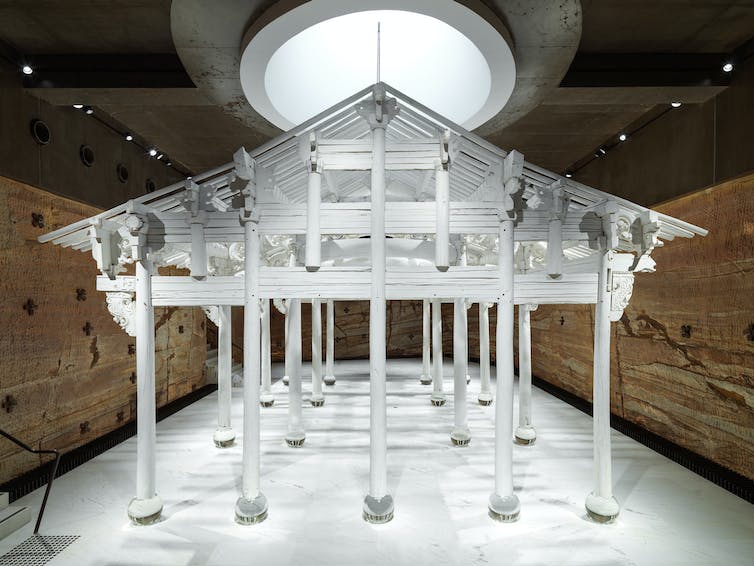 From the tranquillity of this cavern, a staircase leads up to Alfredo Jaar’s immersive, experiential journey through hell, purgatory and heaven inspired by Dante Alighieri’s 14th-century poem The Divine Comedy.

The entrance is a portal of devil’s-cloak red – only ten people can enter at a time. There are strict protocols and instructions – an amalgam of performative ritual and briefing about the required behaviours – including a ban on speaking whilst inside the work.

Silently bonding, we are led into the first chamber, where the senses are activated via the ears, skin and eyes.

Heat, sound, light and silence are employed in a highly staged and meticulously directed experience, which according to Jaar, references a hell of our own making – that is climate change.

As we move through purgatory and on to paradise, the artist draws on his skills as filmmaker and architect to manage the combination of space and image for poignancy and impact. His careful modulation of media ensures this is much more than art as spectacle.

The Divine Comedy offers us an opportunity to traverse the polarities of life and death, heaven and hell, sin and redemption. The latter is also a concern of Oliver Beer’s interactive sculpture, Mona Confessional, which creates a bridge between the interior and exterior of the building.

The internal sculpture is a soft, dark felt spiral like a giant ear canal; the external component a giant ear-trumpet in weathering steel.

On fumbling their way into the dimly-lit centre of the inner ear, the visitor encounters sounds spilling from the outside world and is invited to confess and reveal their innermost thoughts.

On the outside, another anonymous person listens to these thoughts. Neither party even knows where the other is located.

Denny’s installation also uses interactivity and play. His concerns though, are less metaphysical, and more of a hard-edged critique of capitalism. Like Jaar, Denny warns of a climate change catastrophe of our own making.

Exhibited across three galleries, Denny’s works present an unsettling examination of the mining industry. It shows how technology is changing the nature of human labour, hastening species extinction and spawning a new industry of data collection.

Making use of the O (Mona’s mobile device that serves as a digital art guide), some parts of the exhibition are embedded with data that can be scanned by the device to reveal more content and information, in the form of videos and vignettes.

The spare and cavernous first room holds just one object, a cage that could be a bird aviary. On closer inspection, this unnervingly industrial object/sculpture reveals itself as the life-sized realisation of an actual patent drawing (owned by Amazon) of a cage.

Its purpose, if ever made, is to protect the body of a lone human sitting among robots in a fully-automated workspace. 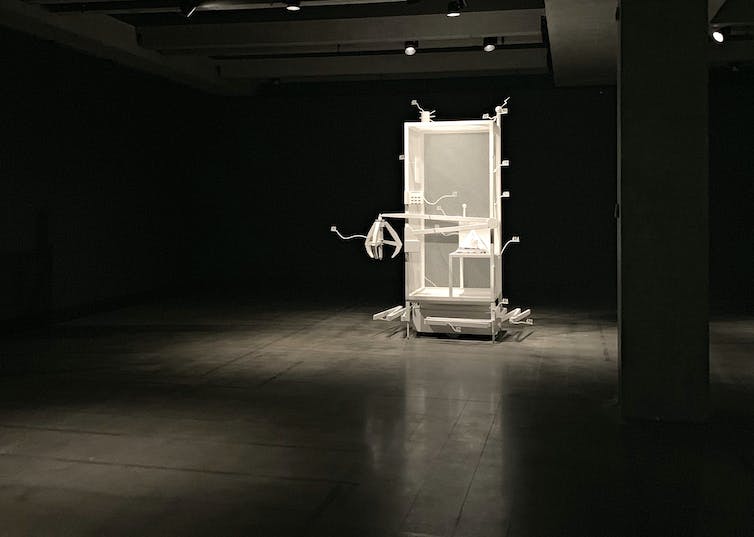 On the wall of the same room we are introduced to videos of the endangered King Island Brown Thornbill. The reference to the canary in the coal mine is deliberate: the extinction of the Thornbill heralds the potential disappearance not just of the human worker, but of the human species.

The second room, by contrast, is a riot of movement and colour. At first glance the life-sized sculptures of industrial machinery look real under harsh artificial lights – it could be a trade show replete with exhibits and interactive screens.

We must focus our O devices on images of the endangered Thornbill to gather information about the rare metals being mined. 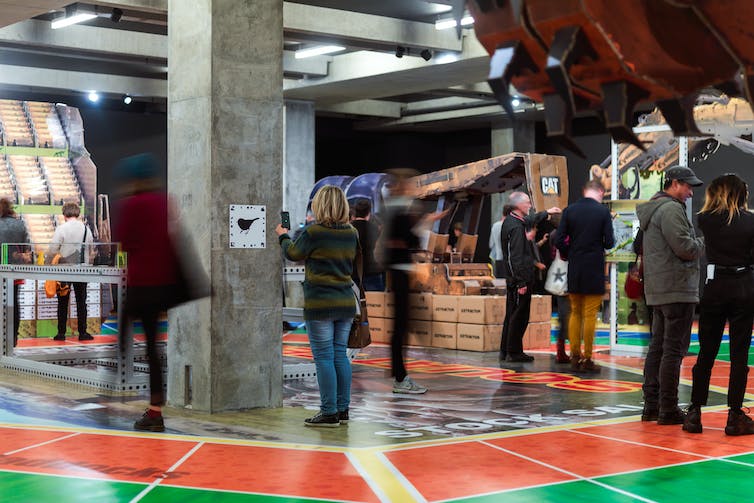 Denny has extended the game metaphor by turning the floor into an enlarged version of the classic Australian board game Squatter. Australia no longer rides on the sheep’s back but instead hitches a lift with the fully-automated, long-wall tunnel miner. 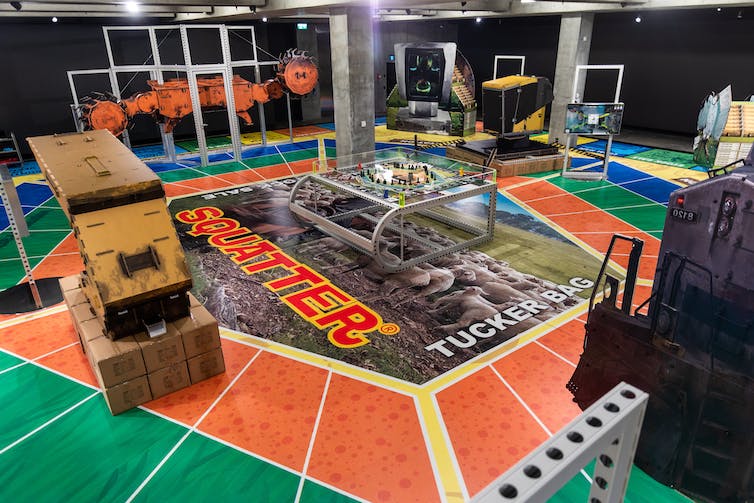 Either way, the accumulated wealth is based on the same colonial legacy of dispossession: prospectors stake their claims just as the squatters settled “empty” land and called it “mine”.

Denny has even created a new board game for our current era. It’s called Extractor, and also serves as a catalogue for the show.

The final room offers a survey of work by other artists that also addresses the merging of the human and the technological to meet the contemporary demand for labour. But it is also a ruse to drive home the point that everyone is in on the game, including Mona.

At the end of the exhibition, it is revealed how the museum is tracking our behaviour and gathering our data through our use of their mobile device. In this context we are all players in the game.