“You never forget the flu”. This is the title of the Victorian health department’s current campaign, which highlights people’s recollections of having the flu. 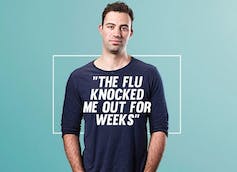 Phrases include “I’ll never forget the pain of the fever”, “the flu flattened me”, “the flu knocked me out for weeks”.

This gives the impression that when you have the flu, you know you have it. What makes the flu so memorable is the severe symptoms. These include fever, aches and pains, a sore throat, runny nose, cough, and feeling weak and lethargic.

But what causes the flu? And why are the symptoms so severe?

Read more: Health Check: how long should you stay away when you have a cold or the flu?

What causes the flu?

Influenza is caused by a virus, a small microbe that needs to enter our cells to replicate and produce more viruses. The influenza virus infects cells that line our airways and so is easily transmitted via the spread of droplets released when we sneeze or cough.

Coughs, sneezes and the other symptoms we feel after getting the flu, are largely due to our bodies fighting the infection.

Read more: I've always wondered: why is the flu virus so much worse than the common cold virus?

The immune response is a double-edge sword

When you are infected with the flu virus, your innate immune system kicks in. Special receptors recognise unique parts of the virus, triggering an alarm system to alert our bodies that an infection is under way.

This produces a rapid but non-specific response — inflammation.

Inflammation results from the action of small proteins called cytokines. A primary role of cytokines is to act locally in the lung to help limit the initial infection taking hold.

They can also make their way into the circulation, becoming systemic (widespread in the body) and act as a “call to arms” by alerting the rest of the immune system there is an infection.

Unfortunately, your body’s inflammatory response, while trying to fight your infection, results in the flu symptoms we experience.

Inflammation can trigger increased mucus production. Mucus (or phlegm) is a sticky substance that helps capture virus in the lungs and upper airways. The increased amount of mucus in the airways can trigger coughing and/or sneezing, and can lead to a runny nose. This helps expel the virus from our body before it can infect other airway cells.

Read more: Health Check: what you need to know about mucus and phlegm

Inflammation also results in an increase in body temperature or fever, which creates an inhospitable environment for the flu virus to replicate.

While an increased body temperature helps fight the infection, it also results in you feeling colder than usual. That’s because you feel a greater temperature difference between your body and the outside environment.

This can induce rapid muscle contractions in an effort to heat you up. This is why you can feel like you can’t stop shivering while at the same time burning up.

Finally, some of these inflammatory molecules act directly on infected cells to stop the virus replicating. They can do this by either interfering with the replication process directly, or alternatively, by actually killing the infected cell.

One of these factors is tumour necrosis factor alpha (TNF-alpha). While its actions limit where the flu virus can replicate, its side effects include fever, loss of appetite and aching joints and muscles.

Calling in the big guns

Inflammation induced by the innate response also helps alert the adaptive immune system that there is an infection.

While innate immunity provides an immediate, albeit non-specific, response to viral infection, it is the adaptive immune response that can efficiently clear the infection.

The adaptive immune system consists of specialised white blood cells called T and B cells that when activated provide a highly specific response to infection. 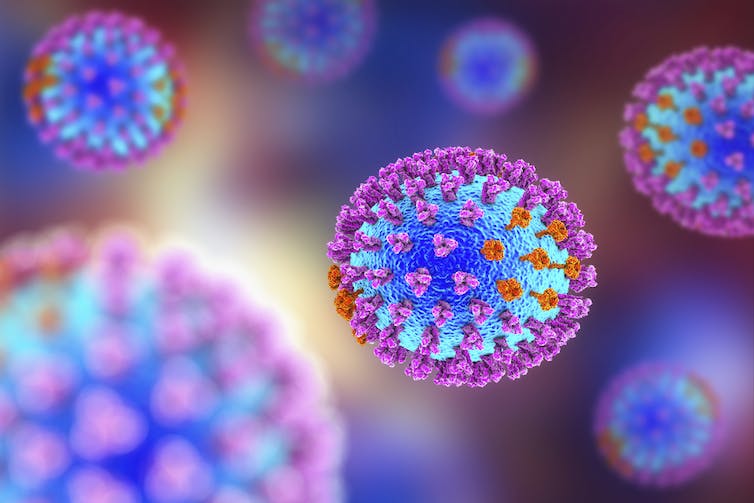 Your flu symptoms are likely the result of your body fighting off infection with the the tiny flu virus. from www.shutterstock.com

Activation of flu-specific T and B cells in tissues called lymph nodes results in the generation of hundreds of thousands of clones, all specific for the flu virus. These can migrate into the lungs and specifically target the virus and its ability to replicate.

This enormous expansion of T and B cell numbers in response to infection results in swelling of the lymph nodes, which you can feel under your armpits or chin, and which can become sore.

Flu-specific T cells are also a source of the inflammatory molecule TNF-alpha and help fight influenza infection by killing off virus-infected cells. Both actions can contribute to the flu symptoms.

Why can flu become a serious problem?

Our ability to see off a flu infection requires a coordinated response from both our innate and adaptive immune responses.

If our immune system function is diminished for some reason, then it can prolong infection, lead to more extensive damage to the lung and extended symptoms. This can then result in secondary bacterial infections, leading to pneumonia, hospitalisation and eventually death.

Then there are people whose immune system doesn’t work work so efficiently who are particularly susceptible to the flu and its complications. These include:

Washing your hands and covering your mouth when coughing and sneezing are simple things we can all do to reduce the chance of catching the flu in the first place.

And getting the flu vaccine activates your adaptive immune response to induce the sort of immunity efficient at protecting us from infection.

With the flu season well under way, prevention is our best bet that you won’t be saying “Remember the time I got the flu”.

Read more: What the flu does to your body, and why it makes you feel so awful