Ask nearly any politician in Canberra or Washington and they will tell you Australia and the United States have a long and storied history as close allies.

The two nations have fought side-by-side in every major conflict for the past 100 years and remained treaty allies since 1951. On the economic front, the United States is simultaneously the largest foreign investor into Australia and the largest destination of Australia’s foreign investment.

Australian and US cultures are complementary, and as two democratic nations, their values – shared commitment to the rule of law, religious liberty, free speech and debate – provide the foundation for their prosperity and security.

But while the two nations have been close for so many decades, there exists a growing set of frustrations between Canberra and Washington. The source of these frustrations? China. 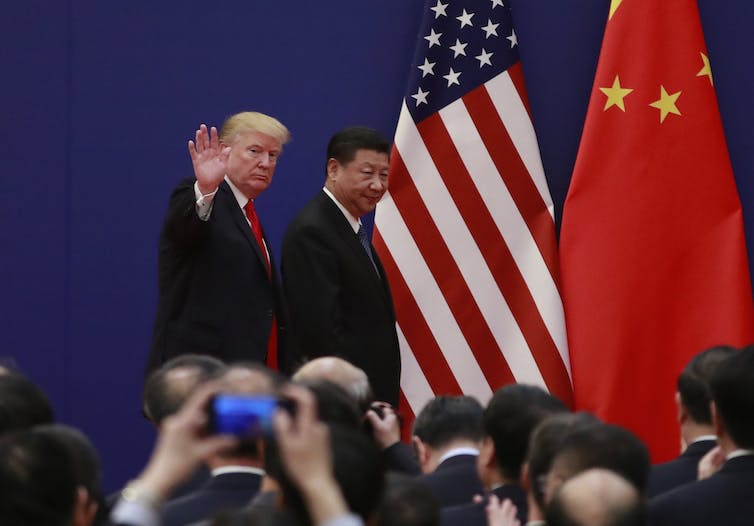 Donald Trump and Xi Jinping at a business summit in 2017. China is threatening the US-Australia alliance that was forged in the early 1950s. AAP

For it to continue to succeed and remain relevant, the US-Australia alliance needs a plan to navigate the challenges ahead. Such a plan requires analysing Chinese objectives and the emerging American and Australian responses.

Hopes that China will emerge as a “responsible stakeholder” in the regional and global order are fading.

China’s main strategy to gain regional power is to undermine the United States’ alliances in the region. This might be achieved through economic incentives to draw a country away from the US and closer to China (as is occurring with Thailand), or punishing countries economically to compel them to slow down military cooperation with the US (as has occurred against South Korea).

The United States and Australia should not fall into that trap.

This is leading to a growing appetite in Washington to challenge China’s “unfair” trading policies, military growth, worsening human rights record, coercive economic practices, and drive to dominate the key technologies and industries of the future.

But in Australia, opinions on what the appropriate response to the increasing power of China are more diverse.

Within government circles, the challenges Beijing presents are being addressed by the introduction of anti-foreign interference legislation, banning Huawei from building Australia’s 5G infrastructure and tightening foreign investment screening.

But in business and tertiary education circles, there is less desire to consider the more negative outcomes of Chinese policies and behaviour, and instead a sole focus on taking advantage of economic opportunities that Xi Jinping’s China presents.

Australian and American policymakers need to realise that these differences in attitude, left unattended, could weaken the alliance significantly.

What do Washington and Canberra want from each other?

As two sovereign states, Australian and US interests will never perfectly align. But, looking only for areas of overlap inevitably leads to a “bare minimum” approach to the alliance.

However, there are many ways the US and Australia can be better allies to each other, given their shifting perspectives.

Washington wants Canberra to be more vocal and proactive when it comes to common alliance objectives, and more explicit about countering Chinese policies we disagree with.

Read more: Could a weakening US economy imperil Trump's trade war against China?

This includes being more willing to call out China’s destabilising activities – such as conflict in the South China Sea and South Pacific – and even lessening Australia’s commercial dependence on China.

Canberra, on the other hand, would like Washington to clarify its objectives, strategy and resources in greater detail, and be clearer about what it would like Australia to do.

It would also like the United States to refrain from counterproductive actions, such as picking fights with allies over issues that could be resolved quietly and behind closed doors.

When the United States fails to communicate with allies on decisions, it can blindside those allies, because it affects their ability to determine what consequences these decisions will have.

Such coordination with allies could mitigate the challenges of China’s well-known tactic of economic coercion. For example, if Beijing were deliberately to reduce the number of Chinese students or tourists it sends to Australia as a way of putting pressure on Canberra, the United States should consider cutting the number of tourist and student visas it gives to Chinese visitors.

Australia should recognise that the United States is prepared to accept a large disruption to its own markets in an attempt to re-balance the global trading relationship with China. And the US will look to Australia to support these efforts, even if not to the same scale.

Investing to compete with China

Without more government support for domestic education, research and development, technology, and infrastructure, both societies will be ill-equipped to thrive in 21st century industries.

Assessment of military spending, for instance, should be guided by ensuring the burden is shared between the allies. And they will need to assess how they can develop a wider set of security relationships with countries in, and beyond, the region, such as Japan.

Both Australia and the US must decide which new initiatives would advance their objectives, and which will prove to be a distraction or even counter-productive.

For example, how much should we invest to develop the Quad arrangement – an informal partnership between the US, Japan, India and Australia? Of the multiple countries with whom we have “strategic partnerships”, which ought to be prioritised?

Without investments in upgrading regional security and trade architecture, Australian and American defence budgets and domestic resilience won’t be equipped to deal with an increasingly repressive, powerful, and aggressive China.

Read more: Despite strong words, the US has few options left to reverse China's gains in the South China Sea

Washington will expect more from Australia, but it will need to follow through on its own resource commitments, refrain from using punitive measures against allies and resolve differences behind closed doors.

Both Washington and Canberra will have to work to ensure that differences in approach to China’s growing power do not put them at cross purposes. Their success in doing so will determine the alliances’ relevance in the the future.