How can penguins and polar bears stay warm in the freezing cold waters of Antarctica? - Riley, age 8, Clarksville, Tennessee USA.

I’m a penguin researcher so I’m going to explain here how penguins can stay warm in Antarctica.

There are four species of penguins that live in Antarctica: emperors, gentoos, chinstraps, and Adélies. 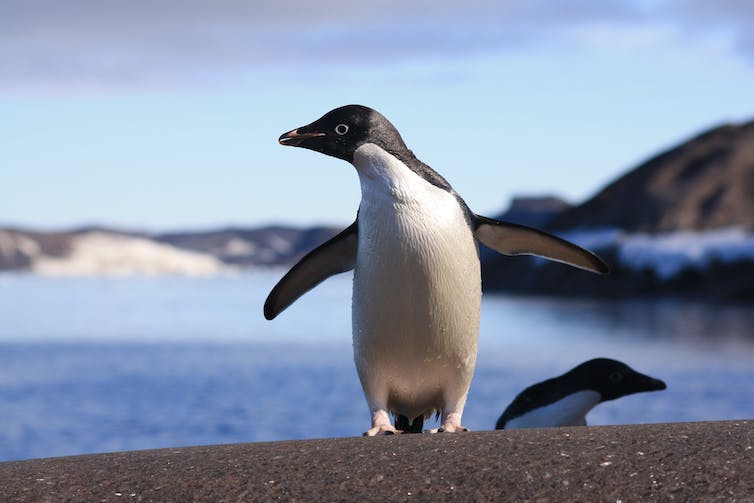 All these penguins have special adaptations to keep them warm, but emperor penguins might be the most extreme birds in the world. These amazing animals dive up to 500 metres below the surface of the ocean to catch their prey, withstanding crushing pressures and water temperatures as low as -1.8℃.

But their most incredible feat takes place not in the ocean, but on the sea ice above it.

Surviving on the ice

Emperor penguin chicks must hatch in spring so they can be ready to go to sea during the warmest time of year. For this timing to work, emperors gather in large groups on sea ice to begin their breeding in April, lay their eggs in May, and then the males protect the eggs for four months throughout the harsh Antarctic winter.

It’s dark, windy, and cold. Air temperatures regularly fall below -30℃, and occasionally drop to -60℃ during blizzards. These temperatures could easily kill a human in minutes. But emperor penguins endure it, to give their chicks the best start in life.

Emperor penguins have special physical and behavioural adaptations to survive temperatures that could easily kill a human in minutes. Flickr/Ian Duffy, CC BY

A body ‘too big’ for its head

Emperor penguins have four layers of overlapping feathers that provide excellent protection from wind, and thick layers of fat that trap heat inside the body. 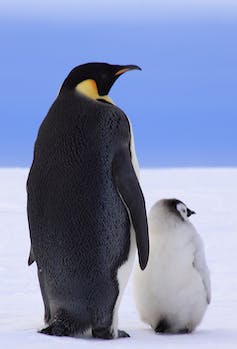 Emperor penguins have a small beak, small flippers, and small legs and feet. This way, less heat can be lost from places furthest from their main body. Anne Fröhlich/flickr, CC BY-ND

Have you ever noticed that an emperor penguin’s body looks too big for its head and feet? This is another adaptation to keep them warm.

The first place that you feel cold is your hands and feet, because these parts are furthest from your main body and so lose heat easily.

This is the same for penguins, so they have evolved a small beak, small flippers, and small legs and feet, so that less heat can be lost from these areas.

They also have specially arranged veins and arteries in these body parts, which helps recycle their body warmth. For example, in their nasal passages (inside their noses), blood vessels are arranged so they can regain most of the heat that would be lost by breathing.

Male emperor penguins gather close together in big groups called “huddles” to minimise how much of their body surface is exposed to cold air while they are incubating eggs.

This can cut heat loss in half and keep penguins’ core temperature at about 37℃ even while the air outside the huddle is below -30℃.

The biggest huddles ever observed had about 5,000 penguins! Penguins take turns to be on the outer edge of the huddle, protecting those on the inside from the wind.

Incredibly, during this four-month period of egg incubation the male penguins don’t eat anything and must rely on their existing fat stores. This long fast would be impossible unless they worked together.

The biggest huddles ever observed had about 5,000 penguins! Flickr/Ars Electronica, CC BY

Emperor penguins are uniquely adapted to their Antarctic home. As temperatures rise and sea ice disappears, emperors will face new challenges. If it becomes too warm they will get heat-stressed, and if the sea ice vanishes they will have nowhere to breed. Sadly, these incredible animals may face extinction in the future. The best thing we can do for emperor penguins is to take action on climate change now.

Read more: Curious Kids: is water blue or is it just reflecting off the sky?