About half of the coastline of Europe, the United States and Australasia is modified by artificial structures. In newly published research, we identified a new effect of marine urbanisation that has so far gone unrecognised.

When we build marinas, ports, jetties and coastal defences, we introduce hard structures that weren’t there before and which reduce the amount of sunlight hitting the water. This means energy producers such as seaweed and algae, which use light energy to transform carbon dioxide into sugars, are replaced by energy consumers such as filter-feeding invertebrates. These latter species are often not native to the area, and can profoundly alter marine habitats by displacing local species, reducing biodiversity, and decreasing the overall productivity of ecosystems.

We are used to thinking about the effects of urbanisation in our cities – but it is time to pay more attention to urban sprawl in the sea. We need to better understand the effects on the food web in a local context.

Most animals that establish themselves on these shaded hard structures are “sessile” invertebrates, which can’t move around. They come in a variety of forms, from encrusting species such as barnacles, to tree-shaped or vase-like forms such as bryozoans or sponges. But what they all have in common is that they can filter out algae from the water.

In Australian waters, we commonly see animals from a range of different groups including sea squirts, sponges, bryozoans, mussels and worms. They can grow in dense communities and often reproduce and grow quickly in new environments. 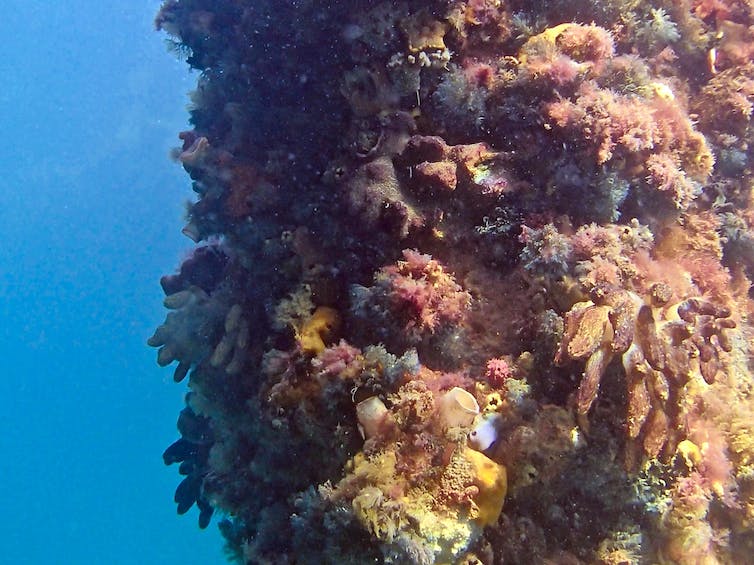 The sheltered and shaded nature of marine urbanisation disproportionately favours the development of dense invertebrate communities, as shown here in Port Phillip Bay.

How much energy do they use?

In our new research, published in the journal Frontiers in Ecology and the Environment, we analysed the total energy usage of invertebrate communities on artificial structures in two Australian bays: Moreton Bay, Queensland, and Port Phillip Bay, Victoria. We did so by combining data from field surveys, laboratory studies, and satellite data.

We also compiled data from other studies and assessed how much algae is required to support the energy demands of the filter-feeding species in commercial ports worldwide.

In Port Phillip Bay, 0.003% of the total area is taken up by artificial structures. While this doesn’t sound like much, it is equivalent to almost 50 soccer fields of human-built structures.

We found that the invertebrate community living on a single square metre of artificial structure consumes the algal biomass produced by 16 square metres of ocean. Hence, the total invertebrate community living on these structures in the bay consumes the algal biomass produced by 800 football pitches of ocean!

Similarly, Moreton Bay has 0.005% of its total area occupied by artificial structures, but each square metre of artificial structure requires around 5 square metres of algal production – a total of 115 football pitches. Our models account for various biological and physical variables such as temperature, light, and species composition, all of which contribute to generate differences among regions.

Overall, the invertebrates growing on artificial structures in these two Australian bays weigh as much as 3,200 three-tonne African elephants. This biomass would not exist were it not for marine urbanisation. 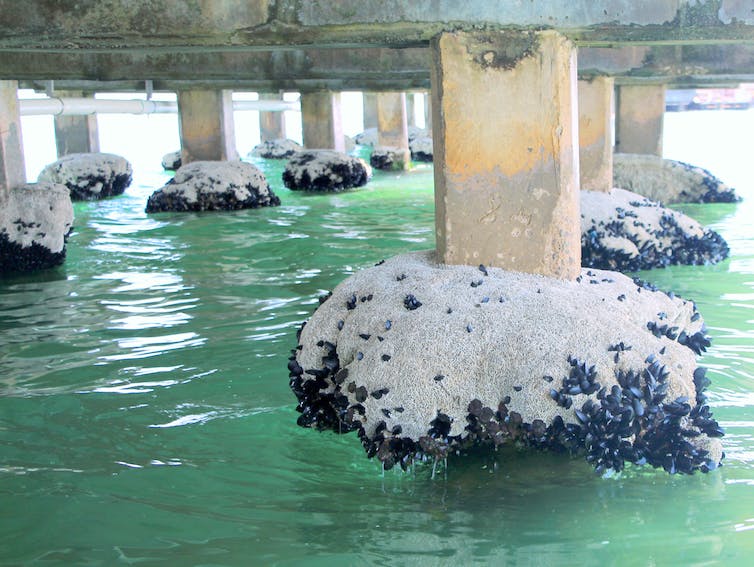 Colonies of mussels and polychaetes near Melbourne.

How does Australia compare to the rest of the world?

We found stark differences among ports in different parts of the world. For example, one square metre of artificial structure in cold, highly productive regions (such as St Petersburg, Russia) can require as little as 0.9 square metres of sea surface area to provide enough algal food to sustain the invertebrate populations. Cold regions can require less area because they are often richer in nutrients and better mixed than warmer waters.

In contrast, a square metre of structure in the nutrient-poor tropical waters of Hawaii can deplete all the algae produced in the surrounding 120 square metres.

All major commercial ports worldwide with associated area of the underwater artificial structures (size of grey dots) and trophic footprint (size of red borders). Trophic footprints indicate how much ocean surface is required to supply the energy demand of the sessile invertebrate community growing on all artificial structures of the port, averaged over the year. This depends on local conditions of ocean primary productivity and temperature. Ports located in cold, nutrient-rich waters (dark blue) have a lower footprint than ports in warmer waters (light blue).

Should we be worried about all of this? To some extent, it depends on context.

These dense filter-feeding communities are removing algae that normally enters food webs and supports coastal fisheries. As human populations in coastal areas continue to increase, so will demand on these fisheries, which are already under pressure from climate change. These effects will be greatest in warmer, nutrient-poor waters.

But there is a flip side. Ports and urban coastlines are often polluted with increased nutrient inputs, such as sewage effluents or agricultural fertilisers. The dense populations of filter-feeders on the structures near these areas may help prevent this nutrient runoff from triggering problematic algal blooms, which can cause fish kills and impact human health. But we still need to know what types of algae these filter-feeding communities are predominantly consuming.

Read more: Explainer: what causes algal blooms, and how we can stop them

Our analysis provides an important first step in understanding how these communities might affect coastal production and food webs.

In places like Southeast Asia, marine managers should consider how artificial structures might affect essential coastal fisheries. Meanwhile, in places like Port Phillip Bay, we need to know whether and how these communities might affect the chances of harmful algal blooms. 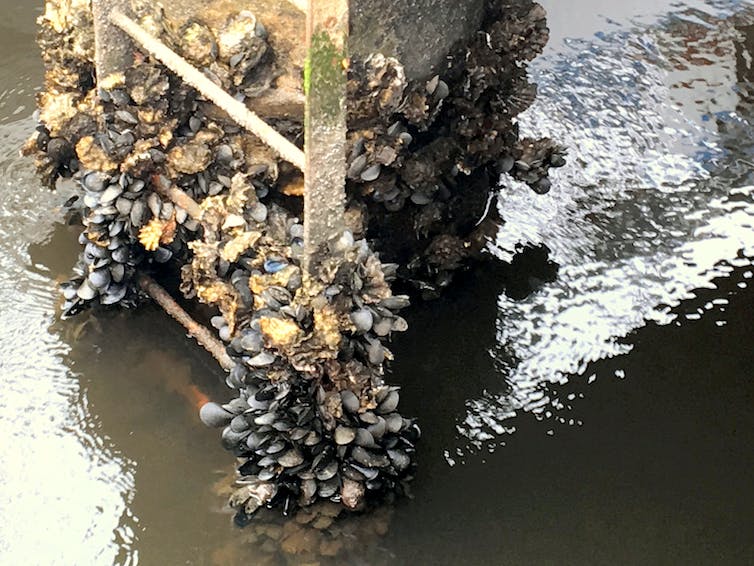 Mussels in the port of Hobart.