Australia took its eyes off long-term unemployment, for what it thought were good reasons.

In the early 1990s, after the “recession we had to have”, long-term unemployment grew to a postwar high of 4% and became a major concern for the government amid fears that once Australians had became long-term unemployed, they would never easily get back to work.

Over time, that concern lessened.

Strong economic growth delivered a steady decline in the overall rate of unemployment and, as a consequence, long-term unemployment.

With the long-term rate low, we looked away…

By the time the financial crisis hit in 2008, Australia’s long-term unemployment rate was down to just 0.6%. After the crisis, our lack of attention continued.

The crisis had caused only a relatively small increase in unemployment, and it seemed reasonable to assume that it hadn’t caused much of an uptick in long-term unemployment.

In absolute terms, it hadn’t. Today, long-term unemployment is 1.25%, still way below its peak in the early 1990s.

But that figure of 1.25% demands closer attention.

It is about 0.3 percentage points higher than would have been the case for the same unemployment rate a few years earlier.

…and kept looking away…

Those few fractions of a percentage point mightn’t seem like much, but they add up to 41,000 more long-term unemployed Australians than would be expected. 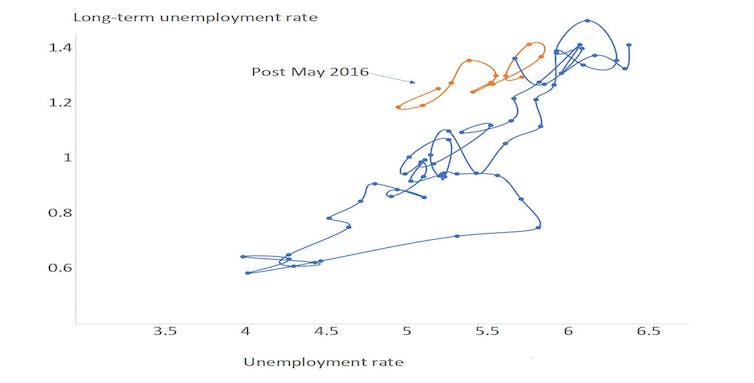