Classroom management is consistently seen as a source of stress for beginning teachers. It’s also one of the main reasons cited for teachers leaving the profession.

So, it’s no surprise teachers try to use classroom management strategies that appear to be effective at changing problematic student behaviour.

Group, or collective, punishment is one such approach. Collective punishment in schools is when a group of students, for example a whole class or a whole grade, is punished for the actions of a few.

Common examples include minutes being taken off recess or lunch break if a class is noisy, or the whole school being banned from using the playground if it’s too messy.

While group punishment is used in Australian schools, it is unfair and unlikely to improve behaviour – so why is it still acceptable in most education department policies?

Why do people use collective punishment?

Collective punishment appears to be immediately effective in promoting compliance. For instance, making the whole grade pick up rubbish instead of having free time is likely to result in a clean yard, and probably less rubbish the next day.

All punishments rely on the idea the experience imposed by the teacher will be unpleasant enough to condition the students to modify their behaviour in the future.

Behaviourists first used this technique successfully with rats and other animals in the 1960s. Behaviour modification strategies were then adopted into classrooms in various forms and are still used extensively today.

Read more: Teachers are more depressed and anxious than the average Australian

No one likes the kid who takes away their lunchtime. 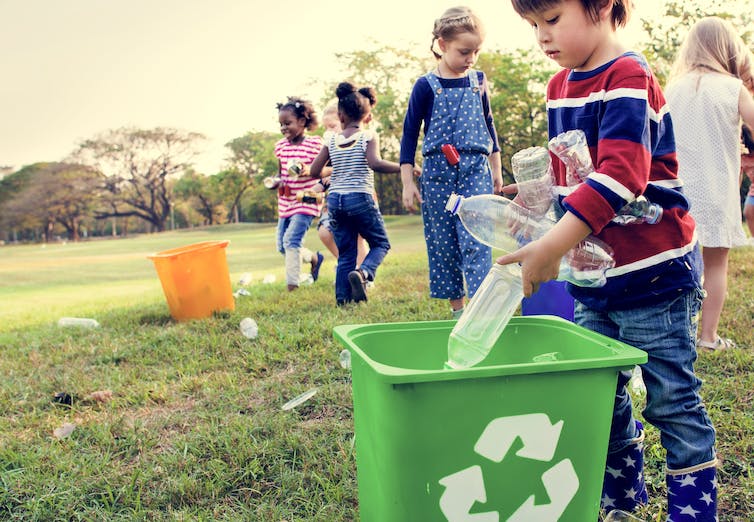 It makes sense to ask a group to pick up rubbish they may not be responsible for. from shutterstock.com

Another reason teachers might use collective punishment is, ironically, to promote a stronger sense of cohesion in the class. The idea is that by the whole group taking responsibility for each individual’s actions, the group will be brought closer together.

This is a common strategy in sports and the military. In a classroom situation, the theory is that the whole class may bond and will accordingly act more responsibly in the future.

Why is collective punishment a bad idea?

While we might see initial compliance from collective punishment, there are two main reasons why this strategy should be dropped. First, it’s morally questionable and second, it’s unlikely to produce more positive behaviour in the long run.

The idea a group should be responsible for the actions of an individual is fundamentally at odds with the theories of individual responsibility in western, liberal societies. Legally and morally, each individual has ownership for their own actions and must bear the consequences of those actions individually.

On a more basic level, it is not fair or reasonable to punish one child for the actions of another. Both of these moral concerns would not be acceptable in wider society, so why would they be acceptable in a school environment?

Second, there is now clear evidence punishments are not effective in improving problematic behaviour.

One imagines this would especially be the case for students being punished for something they didn’t do.

What other options do teachers have?

Teachers mainly use collective punishments when students are disruptive such as when the class is noisy, or students aren’t completing work, dropping rubbish and talking out of turn.

Because such behaviour happens mostly when students are disengaged, the first thing schools can do is actively promote engagement. Engagement includes students’ sense of belonging, enjoyment in class and the value they place on education.

Ways to promote engagement include prioritising individual student well-being, explicitly designing classes to be interesting, and creating a safe and enjoyable learning environment. If a student wants to be at school, he or she is much more likely to behave well.

Teaching practices such as universal design for learning (which includes giving students various ways to acquire knowledge), or inquiry based learning (where students are helped to make meaning out of what they learn), and cultivating an inclusive, positive school climate, may result in fewer behaviours that come from disengagement.

When disengaged behaviours do occur, teachers need to implement strategies that don’t further disengage students, such as rule reminders or quiet chats. These strategies should be tailored to the individual students to address the underlying causes for the behaviour – which may be something outside of the student’s control.

After all, it is possible the reason behind the misbehaviour was a previous collective punishment.