If the first week of the 46th Parliament was heavily ceremonial – dominated by the new governor-general, a raft of first-time MPs and Bob Hawke condolence speeches – the next two weeks will mark a return to normal programming.

And where the opening week allowed just one proper sitting day to thrash out the modestly titled, A$158 billion “Treasury Laws Amendment (Tax Relief so Working Australians Keep More of Their Money) Bill, 2019”, the next fortnight will revert to the usual combination of substantive legislation, otherwise known as “government business”, and the inevitable Question Time theatrics.

Read more: Infographic: who's who in the new Morrison ministry

Both should prove instructive about the longer-term presentation of the Morrison government, and that of the Anthony Albanese-led Labor opposition.

Albanese has already signalled several stylistic changes from Bill Shorten’s leadership. This includes the design of sharper, less rhetorical parliamentary questions, a willingness to bipartisanship on some issues like drought funding, and an aspiration to lift the tone of political combat. This was most recently shown via an instruction to MPs to avoid calling their opponents “liars”.

The House of Representatives program released on Friday contains uncontroversial measures, such as legislation to establish the Future Drought Fund, a bill for Farm Household Support, and a bill to criminalise the use of social media to incite farm invasions on grounds of political/environmental activism.

And it has listed an old favourite, its Fair Work Registered Organisations (Ensuring Integrity) bill, which is aimed squarely at unions and designed to provide powers of deregistering prominent officials on grounds of character.

Will the government deliver on its promises?

The Coalition’s deliberately minimalist election pitch rested on four pillars: generous income tax cuts, the claimed dangers of a Labor government; surplus budgets into the future; and the continuation of a strong economy. 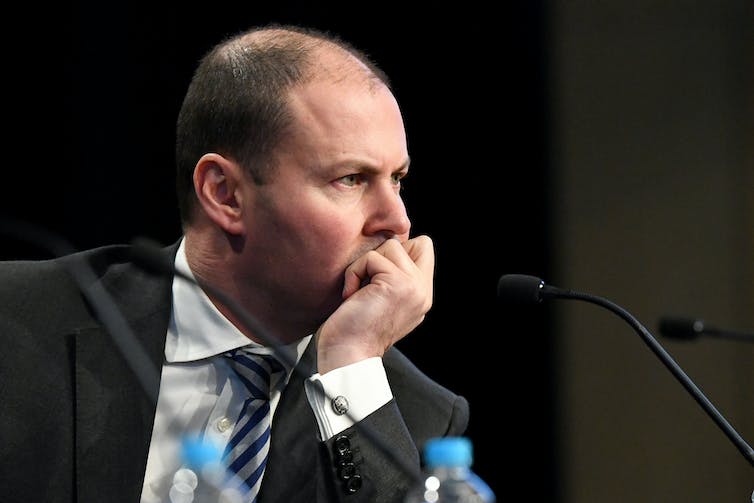 For Treasurer Josh Frydenberg, the urgent challenge is to find ways to boost business and consumer confidence. Joe Castro/ AAP

Already, with just one legislative day under its belt, the tax cuts are through. The mega-spend even gained Labor’s support – once the crossbench numbers were in the Senate, anyway.

Self-evidently, Labor was not elected. So that’s another goal happily ticked off for the Coalition.

But when it comes to the string of budget surpluses and the promised strong economy, things get more problematic.

Read more: Vital signs: we need those tax cuts now, all of them. The surplus can wait

In the short time since the election, the Reserve Bank has already dialled in two (count them, two) cash rate cuts, while signalling that a third could lower the official rate to a staggering 0.75% before the end of the year.

Clearly, getting the economy going again has emerged as the central bank’s number one priority.

For Morrison, and Treasurer Josh Frydenberg, the urgent challenge is to find ways to boost business and consumer confidence. They also need to kick Australia’s sluggish wage growth into gear, without pulling the levers Labor had in mind.

To that end, the pair has made it clear the government will risk its A$7.1 billion projected surplus for the end of financial year 2019-20, despite suggestions from some economists that the political bragging rights of a surplus should be sacrificed in the interests of emergency stimulus for a pallid economy.

The government rejects these arguments. It points to the expected effervescence from stage one of its aforementioned tax cuts package of up to A$1,080 as an immediate tax rebate via a measure outlined in the pre-election Budget.

The government also points to major infrastructure spending as its A$100 billion future works program rolls out, with some of that brought forward and fresh requests to the states to do likewise.

While further direct measures are possible on the fiscal side should the economy slow further, the Coalition’s strong disposition is to a less interventionist response.

Rightly or wrongly, the Coalition views its election reprieve as a blunt rejection of Shorten’s big-spending, big-taxing approach.

Read more: Grattan on Friday: Bill channels Gough as he hopes that his time is coming

And conservative commentators have aided this view, urging the Coalition to avoid grand plans and big ideas, and do no more than simply govern well.

Yet dangers loom, not least of which are the ever-present threat of internal divisions and a sense of policy drift.

The sparseness of a major policy narrative has already elevated an ideological push for a religious freedom/anti-discrimination bill of some kind, despite zero pressure from mainstream voters.

Reactionaries were also quick to flex their muscles in the hours after the new Minister for Indigenous Australians Ken Wyatt used a National Press Club speech to open a new and deliberately non-prescriptive invitation to a co-design process.

The concerning thing for the Morrison government is the speed with which Wyatt’s potentially game-changing approach brought forward the same voices who fanned internal divisions within the Turnbull government over marriage equality, energy policy and climate change.