Margaret Olley’s exhibition at QAGOMA is titled A Generous Life, referring to her capacity to maintain enduring friendships, her support for her artist peers (it is said she would cover their fares to travel and publish books for them), her role as mentor to younger artists, and her enormous generosity as a philanthropist to galleries in Australia, as well as to other arts organisations like the Australian Chamber Orchestra.

Olley donated her own work (in the case of the Orchestra, to auction), that of her peers and younger artists, and works from her own collection. She also made major donations to public collections, such as a donation to the Art Gallery of New South Wales that included works by Cezanne and Picasso. 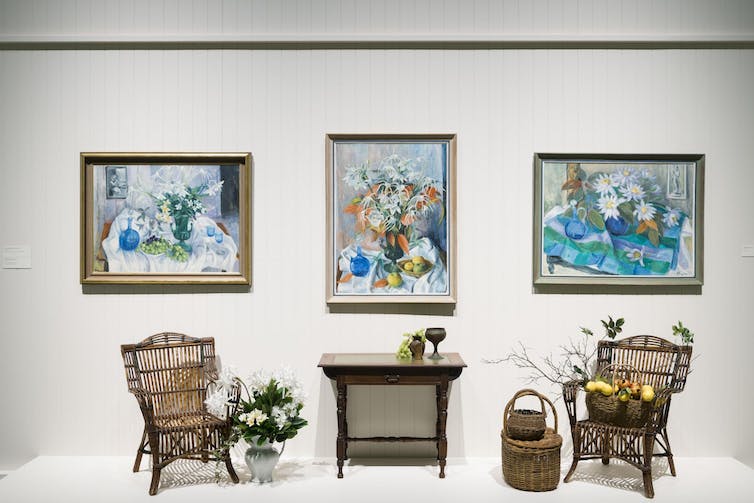 Slade was referring to Quilty’s passion for speaking out in support of human rights and against injustices. For example, his determination to address the ignorance around official versions of Australian history, which obscure the truth of violence to Indigenous people; his response as a War Artist in Afghanistan to the way the trauma of war seeps through all ranks; his amplifying the voices of refugee children in Greece, Syria and Lebanon, revealing the anguish of living with war.

And then there was his friendship and support for Myuran Sukumaran and Andrew Chan of the Bali Nine and the battle to turn public opinion and legal might against the death penalty, and his actions urging us not to ignore the tragedy of refugees and asylum seekers detained in our own waters. Quilty has made all these issues the subject for painting and activism. 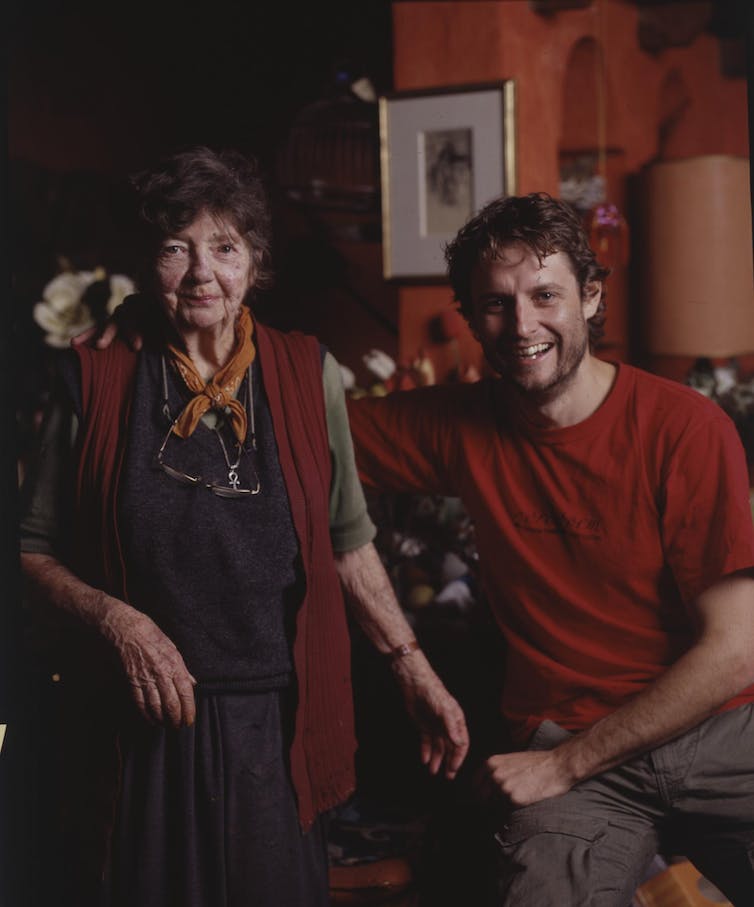 Read more: A noisy, passionate show from an artist in a hurry, Quilty has just one emotional pitch

Quilty’s exhibition of works from the last seven years (travelling from the Art Gallery of South Australia) and Olley’s exhibition of 100 works from across her professional life (curated by QAGOMA’s Michael Hawker) are brought together by good planning. The artists are said to be an odd couple or as arts critic John McDonald says “a legendary Aussie duo” (the others he cites are Burke and Wills, and Kath and Kim!).

However the two exhibitions don’t so much fit together (the subject matter, the artistic approach and intent, could not be further apart) as somehow build together.

Perhaps not unlike the way Olley and Quilty’s friendship built. In 2002, Olley, a judge for the Brett Whiteley Travelling Scholarship, awarded the scholarship to Quilty. From then on, she was his mentor, buying his work and gifting it to state and regional gallery collections, and introducing him to her influential friends of the art world.

Their friendship grew such that towards the end of her life, Olley agreed to sit for Quilty for a 2011 Archibald Prize portrait, which Quilty won. Just as Olley’s artist career was affirmed through William Dobell’s winning portrait of her in the 1948 Archibald, so in an inverse sort of way, Quilty’s career has similarly been affirmed through his 2011 winning portrait of Olley. 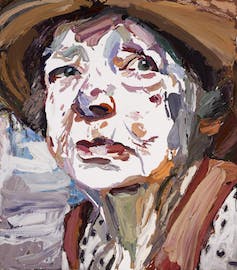 Olley is the only person to have been the subject of an Archibald Prize winning portrait twice (excluding self portraits) - at the beginning of her artist life and at the conclusion. Olley died three months after Quilty’s win. Happily, both intriguing portraits of her are in the Olley exhibition.

In preparing viewers to navigate between these shows, Quilty has created on the North Gallery wall interfacing Olley’s exhibition large line drawings of Olley taken from his preparatory sketches for the Archibald portrait. Just as the finished oil paint portrait exists through the slightest suggestion of paint, so these chalk drawings are equally ethereal, with a presence that just lingers. 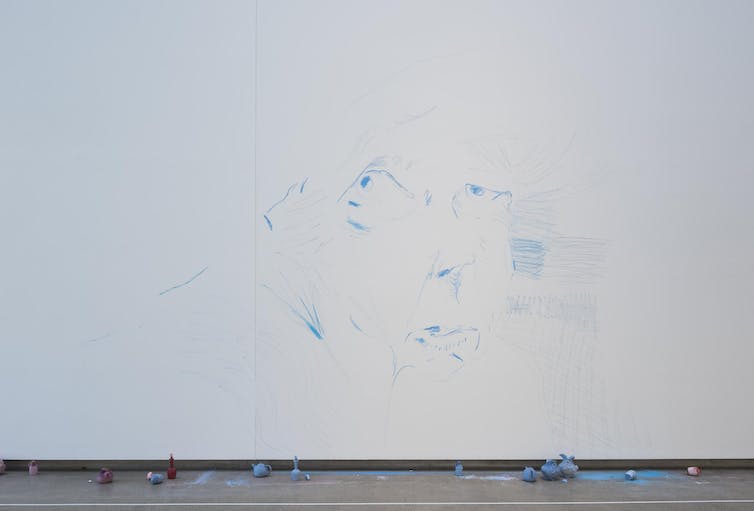 Interestingly, the chalk is created from red, pink and blue chalk casts of jugs, teapots and lidded jars – gifts from Olley’s vast collection to Quilty over the years. In their cast forms, these objects appear in the gallery as clusters of fragmented empty vessels below the wall.

On the opposite North Gallery wall adjoining Quilty’s exhibition, Quilty has reconfigured his work Inhabit (2010). This consists of 16 cell-like images that move us from abstracted matter to discernable images of James Cook, and then to Cook as a cadaver, to a cranium, to Quilty, and onto a mere spatial presence. In this iteration, these figures appear to be present at a dinner party. They are within two large tables with baroque flourishes created by black spray paint onto the wall.

Throughout Quilty’s exhibition there is an urgency to look deeper, to step back, to weigh up, to know more, to reassess, to unravel, to grieve and occasionally smile at the absurdities served up. Justin Paton, head curator of International Art at the Art Gallery of NSW, refers to recent Quilty work as “painterly-political grotesque”. He describes Quilty as a “painter of conflict, turbulence, knots, double binds, dark laughter and awkward resistance”. There are certainly demons and the macabre that won’t go away, nevertheless somehow there is empathy and compassion. It is this that holds us. 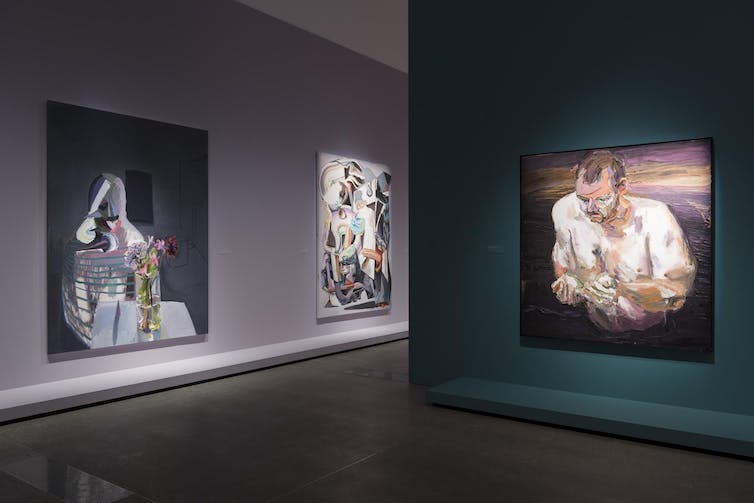 In Olley’s exhibition her family home of Farndon becomes the central site of inspiration and reference. We enter the exhibition past a huge (possibly dusty) flower arrangement, and into a dimly lit hallway with a wood detailed archway, familiar in old Queenslanders. Farndon is where Olley lived and worked for stretches of time after her father died and then from time to time between her stays in Sydney and Newcastle (keeping paintings and materials in all three locations), until the house burnt down in 1980. 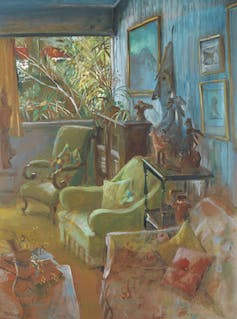 Hawker says Farndon had a calming presence on Olley, with its high ceilings, generously sized rooms, and plays of latticed-light across the floors. It was surrounded by lush vegetation that we see, all but bursting in the room in her paintings Interior 1V, and VII (1970).

Olley is said to have avoided having her own work on white walls and in this spirit, the gallery walls are a distinct mood setter of rich green, grey and salmon. Just as in Olley’s paintings of interiors where paintings, artefacts, furniture and, of course, flowers, create her universe, so this effect is created in the exhibition in several places.

The exhibition charts Olley’s early work in Brisbane (1946-48) where she paints iconic buildings (Old Masonic Lodge, Treasury Building, Queensland Club), her delicate Boonah (Qld) landscapes, and then portraits of young Indigenous men (with guitars and bananas), and most interestingly Aboriginal women (with dazzling, jostling flowers) and as nude subjects. 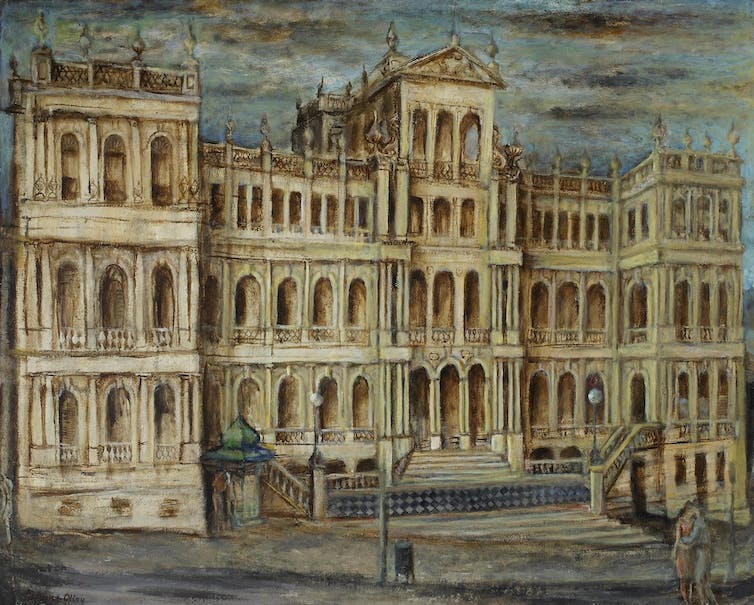 To me, her figures always look a little uncomfortable – slightly halted, detached, even frozen. From the mid 60s, Olley left figure painting and focused more and more on still life.

Ironically, it is when Olley focuses on still life that I feel her subjects (in fact objects), create a highly animated world. Space became a keenly articulated interest for Olley. It is where the subtle dramas can be created or insinuated. “Space is the secret of life”, she has said. “[I]t is everything, and I have used it to suit me not only in my surroundings but over time.” 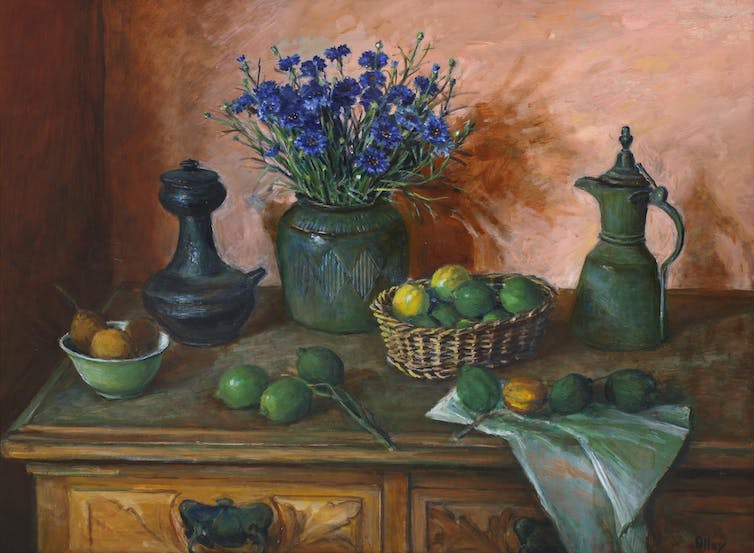 What ultimately brings both these exhibitions together in a satisfying way is that each artist has developed their own sense of direction and a studied sense of purpose.

At the exhibition opening, Quilty said that after Olley awarded him the Brett Whiteley travel scholarship, she asked him “Are you one of us or one of them?” He says he has never has worked out what she meant.

Given what we know about Olley, we could say she was asking Quilty – is art central to your life and the reason to be? It was for Olley, and it would appear to be for Quilty.

Margaret Olley: A Generous Life and Quilty are on at QAGOMA until October 13.