When Reece Kershaw takes over as the new commissioner of the Australian Federal Police (AFP) in October he will become the eighth person to lead the organisation since its creation in 1979.

Kershaw becomes commissioner at a critical time for the AFP. The organisation is not in the media’s good books following its post-election raids on journalists working for the ABC and News Corp.

His role will be even more challenging with the AFP now sitting in the Home Affairs portfolio. The AFP Association (AFPA), the union representing 6,500 AFP members, claims the AFP is losing its independence and integrity in the super portfolio. The danger is that the AFP will become politicised over time.

Kershaw has demonstrated he is not afraid of change and tackling thorny integrity issues – traits that could serve him well in his new role.

The question remains, however, whether Kershaw will oversee another transformative era for the AFP, or if our current political and security environment will require more of a focus on organisational stability.

A police force trusted by the public

The AFP was created following the most serious terrorist attack in Australia – the Sydney Hilton hotel bombing in 1978. In the wake of the attack, the Fraser government commissioned Sir Robert Mark, the London Metropolitan Police deputy commissioner, to report on Australia’s policing capabilities. The opening of the report noted that

some aspects of policing are … common to all free societies; for example, the extent to which the effectiveness of a police force depends on public confidence and support arising from its accountability.

The AFP’s dependence on public confidence has not changed in the 40 years since its formation.

Choosing a first commissioner to lead the AFP was difficult. Mark recommended the merger of the ACT and Commonwealth police forces, both of which already had a commissioner. In adopting Mark’s recommendations, the Fraser government chose Sir Colin Woods, another former deputy commissioner of the London Metropolitan Police, as the first head of the AFP.

Read more: The Australian Federal Police needs to be free to do its job without political interference

Changes in the political environment over the years, as well as heightened security concerns from crime and terrorism, have required some of these men to be greater agents of change than others.

Palmer, for instance, remodelled the AFP’s national arm from a quasi-military service to a more flattened team structure during his term as commissioner from 1994-2001. This created a flexible and dynamic model of policing that put the AFP in a good position to handle the terrorist threats that followed the 9/11 attack and 2002 Bali bombings.

The AFP doubled in size under Keelty’s watch from 2001-09. In 2004, Keelty contradicted the Howard government and warned that Australia’s involvement in the Iraq war had increased the threat of terrorist attacks at home. Despite criticism from Prime Minister John Howard and Attorney-General Philip Ruddock, Keelty held firm, supported by other police commissioners and a public that understood the risks. 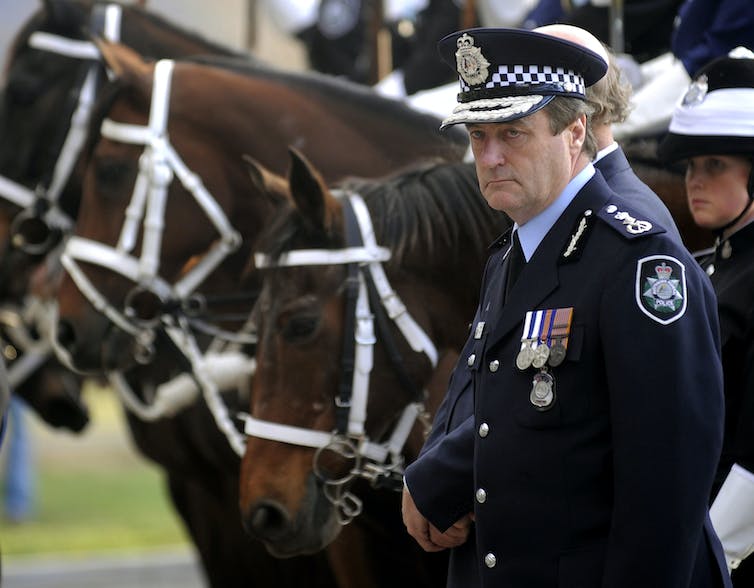 During his time as commissioner, Mick Keelty was fond of saying, ‘If a police force doesn’t have its integrity, it has nothing.’ Alan Porritt/AAP

This action, among others, helped build public trust in the AFP. The latest Essential poll in March showed that the AFP – along with other police services – enjoyed the highest level of public trust of any Australian institution and organisation.

Maintaining this trust will be one of Kershaw’s key challenges, particularly in the wake of the AFP media raids.

When I was working for the AFP, I often heard Keelty tell audiences:

If a police force doesn’t have its integrity, it has nothing.

Kershaw began his policing career with the AFP in 1988 and clearly learned lessons about leadership integrity while serving under Keelty.

In 2011, Kershaw joined the Northern Territory police, and as deputy NT commissioner four years later, was forced to confront, and eventually give evidence in court against his boss, then-Commissioner John McRoberts.

McRoberts was eventually found guilty for attempting to pervert the course of justice in a fraud investigation into his former lover. It was the biggest scandal involving an Australian police commissioner since the conviction of Terry Lewis for corruption after the Fitzgerald inquiry in Queensland.

Kerhsaw then stepped into the NT commissioner role, which he held until his current promotion.

The reports that have followed Kershaw’s shift from NT to federal commissioner are telling. The acting NT commissioner, Michael Murphy, praised Kershaw for confronting integrity failures at all levels.

We need to police by consent, that is vitally important. Commissioner Kershaw made it quite clear that if you can’t align with those values, then you shouldn’t really belong to a public safety agency.

This reflects the Mark report’s observations on the role of the police from 40 years ago.

Read more: The new Department of Home Affairs is unnecessary and seems to be more about politics than reform

Kershaw’s ability as a deputy commissioner to confront his superior also shows the moral strength expected of police leaders. He will need to exercise this strength in his new role as the political pressures on the AFP are sure to increase.

The Morrison government will likely demand that any future national security leaks be investigated. These have always been sensitive for any government. And special references from government - the technical term that includes leaks - cannot be ignored by the AFP.

Dealing with the special references from government in a balanced way will shape a bigger challenge for Kershaw – maintaining the AFP’s independence in the Home Affairs portfolio. If the AFP becomes permanently enmeshed within the Home Affairs culture, it may indeed lose its identity.

In the 78 years between the time of federation in 1901 and the creation of the AFP, the Commonwealth relied on ten different police forces. It then took years to overcome the ACT-Commmonwealth rivalry within the AFP. With the 40th anniversary of the AFP now approaching, few if any serving officers will have known anything but the current culture of the AFP.

Defending and improving this culture through further integrity-building will benefit both the AFP and the Australian community at large. We should all wish Kershaw success in these endeavours.