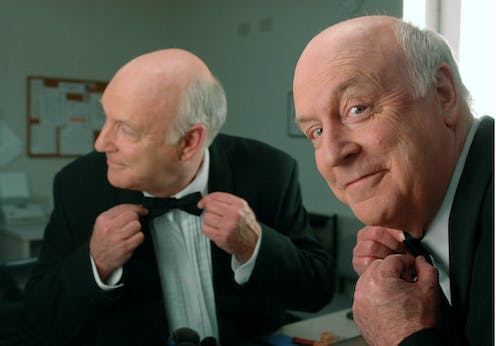 In April this year, the Ukraine elected comedian Volodymyr Zelenskiy as its president, and the ABC reported on a sudden upsurge in Australian interest in something similar here. Many names came forward, but the only actually dead...

In April this year, the Ukraine elected comedian Volodymyr Zelenskiy as its president, and the ABC reported on a sudden upsurge in Australian interest in something similar here. Many names came forward, but the only actually dead nominee with any significant support was John Clarke.

Clarke died in 2017. Still, there is no doubt that if alive, he would have been a popular choice, and a wiser one, in my view, than any of the men who have held the job in the past decade or so. At least we would be ruled by someone who knew how to begin and end a sentence. Surely deathless prose (even from the dead) is an improvement on an endless stream of nouns prefaced by “How good is …?”

But it is not exactly Clarke’s prose that I’m writing about here. It is his occasional parody verse (mostly from the 1980s and 90s), seen as a window on the creative genius of his command of language.

In particular, consider this ars poetica disguised as a poem about building a model plane by Fifteen Bosworth Longfellow, “an Adelaide academic who wrote instructions for kit-set model products”, from Clarke’s 2012 book of Australian verse:

Clarke called his art tinkering, and it’s beautifully described by his daughter Lorin:

Some people’s dads spend hours tinkering in the shed. Our dad, John Clarke, borrowed the word but required only a desk and ‘gallons of tea’ for the kind of tinkering he did. 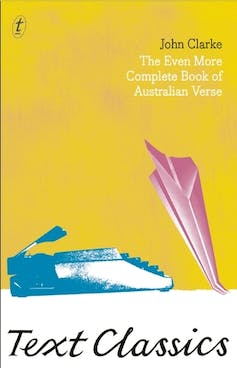 It involved prolonged fiddling with words to get tone, rhythm and meaning exactly right. So, with characteristic ironic deflection, he slips a poetics of his practice into a poem that might otherwise be mistaken for a charming bit of rhythmic nonsense. The chaste mid-20th century fustiness of Clarke’s Longfellow evokes the nostalgic sense of practical men and women, busy with their hands. It is a world of pragmatic dignity and restraint that sits throughout Clarke’s work as a critical play-frame around the busy modishness and bullshit of postmodern culture and postindustrial politics. He takes all the parts from the pre-formed linguistic kits of political doublespeak, sport, or poetry from their highly spun packages, lays them out for inspection and, with gimlet eye, identifies the bits we shouldn’t have to put up with. The lines evoke Clarke’s quiet, inquisitive voice, overriding the juvenile enthusiasm of Henry Wadsworth Longfellow’s interminable ballad, The Song of Hiawatha (1855). Then the metaphor extends to cover the logic of the masterful Clarke and Dawe TV interviews (ABC TV, 1989-2017) in the first six lines — ‘With the implement provided / Ease the bearings to the left / Push the little angled mullion / Up into the socket ‘F’. Yes, ease the bearings to the left; then push the mullion right up the F. Though never ideological in a narrow or doctrinaire way, the sketches always attacked privilege from the left and from below, working to egalitarian and anti-establishment ends. And the incendiary satirical effect of each sketch is captured exactly in ‘Overlapping lifting side-flaps / Lower in to fit the screws, / Pack up tools, retire to distance, / Don protective hat, light fuse.’ Those decades of mock political interviews were just that: pragmatic and intimate terrorism packaged as foolishness. In them, the parodied speakers sounded ridiculous because their words, the frantic idiocies of the moment, were anchored in a tone that invokes a world of careful and detached judgement, a world not easily impressed. Content and rhetorical form cannot override the stable, tinkering persona that governs the voice, so that the self-promoting nonsense of the day is filtered parodically through a wiser alternative discourse. Intimately undermined and, with luck, exploded. The wonder of Clarke’s satirical technique was the way he managed to inhabit fools and knaves while simultaneously remaining his utterly stable and authoritative self. The judgements of the passing parade of politicians, bureaucrats, marketers, businessmen, and other spivs managed to be both deadly accurate and utterly reliable. The madness of his targets never comes to carry away the satirist, as it sometimes does Barry Humphries or Chris Lilley. The judging self never becomes as dominant as it does with Hannah Gadsby or Tim Minchin. Great performers all, but only one Clarke. Amazingly, the edition of Comedy Studies that I have co-edited with Jessica Milner Davis is the first serious scholarly account of the works of this great Trans-Tasman comedian. It will not be the last. But if you want somewhere to start with unravelling the mystery of that compelling, consoling, challenging satirical voice, I recommend that you think about how to construct a model plane, à la Clarke. There will be no more such tinkering, sadly, but its echoes will live on in our ears. This piece is based on one of the nine articles that appear as Comedy Studies Volume 10, 2019 - Issue 1.