In her catalogue essay for Shaun Gladwell’s show Pacific Undertow, Dr Denise Thwaitess of the University of Canberra, writes, “for Gladwell, law-breaking has never been a particular deterrent.” That has to be an understatement.

Shaun Gladwell’s entire creative life has been spent twisting, bending and breaking standard rules of engagement with technology. He learns a technique in order to subvert it. He has spoken of how “a new tool can change the game in art”. And he loves new tools. The overriding principle that governs his creative explorations in many different forms of media is the pleasure principle. 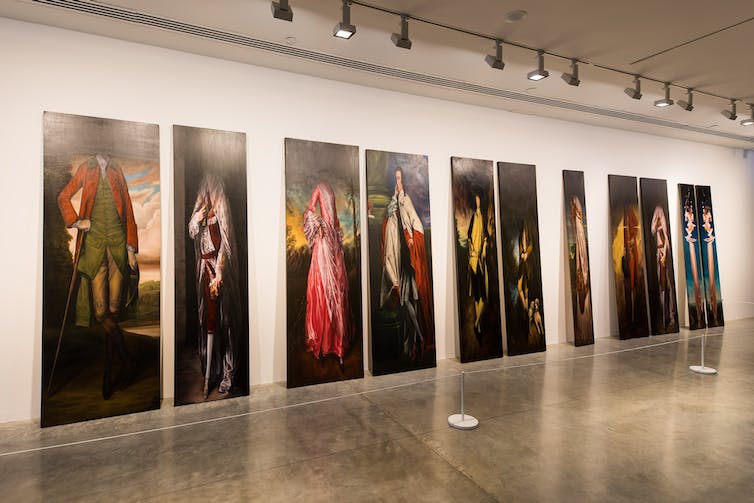 The joy of Pacific Undertow is that it shows how consistent the artist has been in his approach to both media and pleasure in the course of his career. He is almost a mirror image to Mike Parr, an artist whose creative life has been one long recorded expression of bodily angst.

Gladwell also charts his fascination with the body and what it can do, but he is more interested in how much fun it is to do these things. One of his photographic interventions, Untitled (Parr Leap) is a playful homage to the older artist’s constant flirtations with danger

Gladwell’s breakout video, Storm sequence (2000), stars himself, in a single, slow motion shot, skateboarding at a rainy Bondi Beach, the space made more intimate by water that spatters on the camera. It remains one of his most memorable works, for both the mesmerising virtuosity of the skateboard performance and the quality of the technical production. 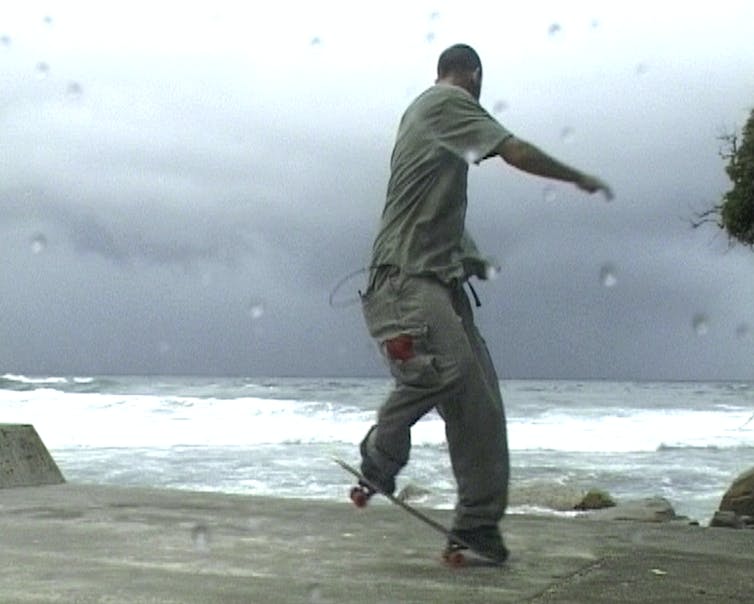 It seemed a surprisingly swift transition from his earlier works, which had been paintings – headless figures reworked from portraits by Reynolds and Gainsborough, stretched and distorted, but as mirror-smooth as the originals. These were first painted in his honours year at Sydney College of the Arts, an institution not known for its painterly tradition.

But what they represented was a physical exploration into art history and an artist’s investigation into the colonising culture that defined people’s worth solely by their clothes and their possession. He used the (then) recent technology of Photoshop to manipulate low resolution jpegs and thus turn it to his purpose. 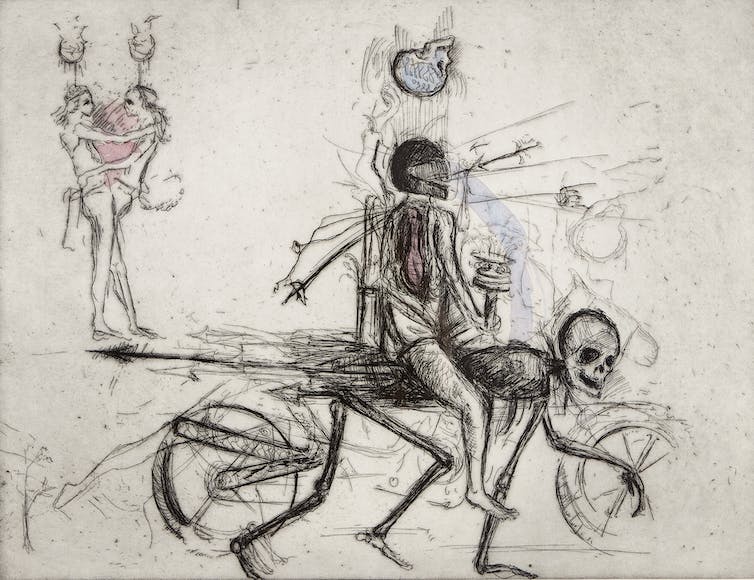 Gladwell’s transition from painting to video happened when he was completing his Masters degree at the College of Fine Arts, UNSW and became a part of the Imperial Slacks collective, so called because the Surry Hills building where they lived, worked and exhibited was so named.

Imperial Slacks became a nursery for creative talent including Claire Healy & Sean Cordeiro and The Kingpins. Angelica Mesiti​, one of the Kingpins, shares with Gladwell the distinction of having represented Australia at the Venice Biennale.

Art history is the understated backdrop to much of Gladwell’s work. It comes as no surprise to discover he admires Holbein’s The Ambassadors, with its distorted skull. Holbein incorporated the anamorphic skull as a piece of virtuoso visual trickery, but also as a memento mori, a reminder of our mortality.

Skulls also hold a fascination for Gladwell. The skull is central to Endoscopic Vanitas (2009) as well as appearing in many etchings, including Allegorical study/riding with death (2007). Gladwell, a lover of motorbikes as well as skateboards, reminds viewers that motorbike riders know that skulls are fragile. 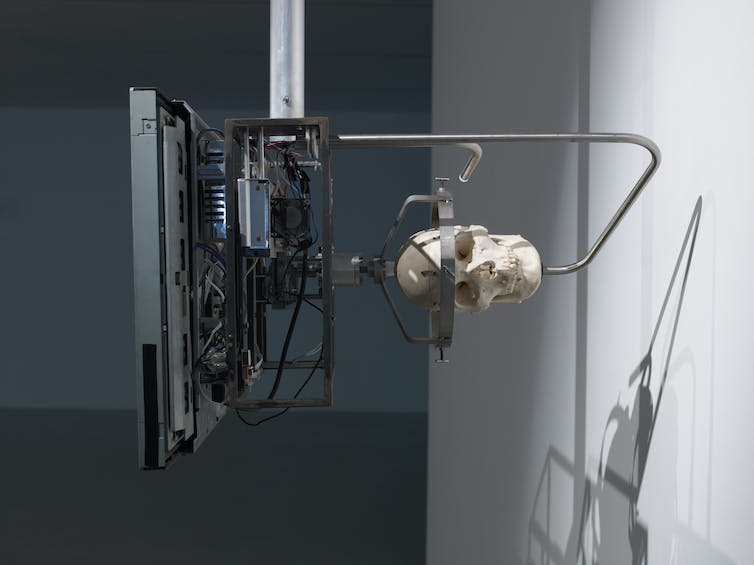 Approach to Mundi Mundi, filmed on the landscape made famous by Mad Max, also cites Leonardo da Vinci’s celebration of human proportion, Vitruvian Man. Sometimes Gladwell’s approach to past art verges on the flippant, as in Skateboarders vs Minimalism (2016) where virtuoso skateboarders leap across replicas of iconic Minimalist works. 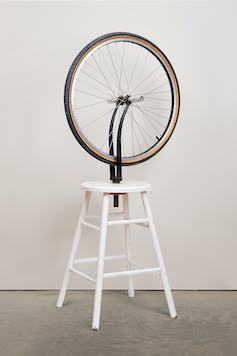 Even more surprising is his tribute to Duchamp, Reversed Readymade (Bicycle Wheel). Visitors to the exhibition can use augmented reality on an iPad to see the champion BMX rider Simon O’Brien walk to the exhibit and ride it around the gallery. As well as a virtual installation in the exhibition, Gladwell has moved beyond the walls of the MCA with a version of Minecraft.

Although Self-portrait (Linework) does give one visceral reminder of the physical toll of making art in this manner, Pacific Undertow is on the whole a joyous celebration of what art can do, what life can be. There are visual jokes aplenty, where photographs are inverted to create unusual relationships with historic figures, and the video Pataphysical Man (2005), a generous absurdist tribute to Imants Tillers. 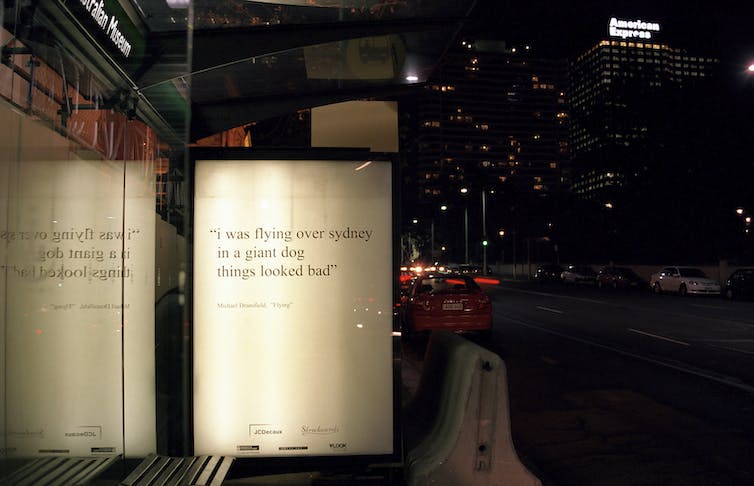 But then, in the midst of this joie de vivre there are works that make the viewer pause and think about the fragility of it all. Portrait of Michael Dransfield shows a nighttime reflected image in a bus shelter where an advertising agency has placed a fragment of Dransfield’s poetry. The shelter is placed outside Sydney Grammar, Dransfield’s old school. A memento mori does not have to be a skull.

Shaun Gladwell: Pacific Undertow is at the MCA in Sydney until 7 October 2019.