If you have a question you’d like an expert to answer, send it to curiouskids@theconversation.edu.au. Why do I sometimes forget to say something mere moments before I say it? - Labib, aged 12, Irvine, CA. That’s an interesting question, Labib. Forgetting to do or to say things happens to all of us sometimes. Have you ever walked into a room and realised you can’t remember what you were looking for? We tend to do this more when we are thinking of a few things at once or doing two things at the same time. Some people call this “dual-tasking”. Read more: Curious Kids: Why do adults think video games are bad? Have you ever crossed the road while chatting to a friend at the same time, or walked across a room while tapping away on a tablet or phone? That’s dual-tasking. Everyone does it and we tend to get better at it as we get older and learn new skills. But while our brain is a truly amazing computer – more powerful than any real computer – it can only use so much mental energy at one time. Your brain is a power station Think of your brain as a power station, providing electricity to a number of cities. If some cities cry out for a lot of energy (by having all their light switches on), other cities would have less power to work with. There’s only so much electricity to go around. 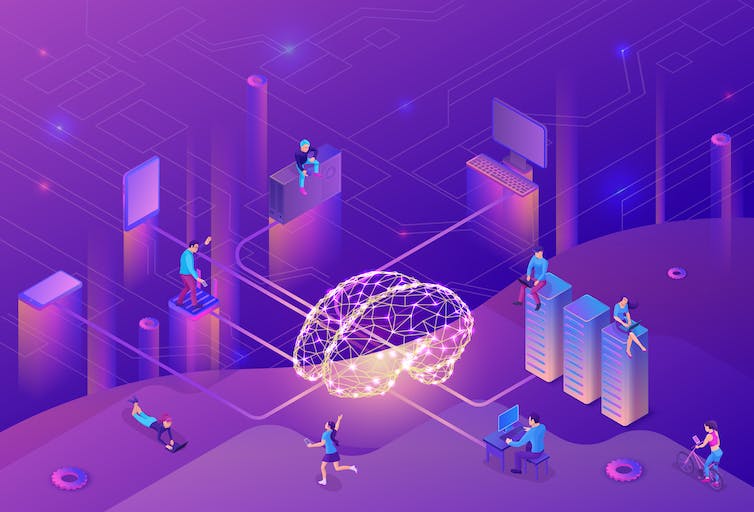 Our brain is like a power station, providing energy to lots of different tasks we might be trying to do. Shutterstock In the same way, your brain only has so much energy to share around at any one time. Younger kids have small brains and have less mental energy available than older kids. In the same way, a teenager’s brain is less mature than an adult brain. Now, this brings us back to the question of forgetting things. An older (and more experienced) brain means more mental energy to share between tasks. For young kids, dual-tasking is possible. However, some studies suggest that it can be a little more difficult for younger kids compared with older kids. Why? The power station in their brain is a little smaller and is not producing quite the same amount of energy as older kids. Practise makes perfect The more we practise our skills (like riding a bike, playing a sport, or baking a cake), the better we are at doing another task at the same time. For a very skilled sportsperson (like a footballer), juggling a football while having a chat with a friend would be easy. Their football skills are so automatic that they don’t need much mental energy to do it, leaving more for other things. However, for someone who is just learning, juggling a ball may require a lot of mental energy just by itself. There is not much leftover for holding a conversation.

So, why do I sometimes forget to say something before I say it? The answer is you are likely to have been “dual-tasking” just before speaking. It might have been because you were thinking about the words you wanted to say and something else at the same time. Or maybe you were concentrating on listening while trying to think of what to say. Sometimes, your brain just can’t do two complicated things at once. You might not have enough mental energy in that moment. Forgetting things is normal for everyone and can happen when you are doing too many things at once. When it happens to you, take a deep breath and relax! Perhaps those words will come back to you later when you clear your head and re-energise. Read more: Curious Kids: how much does a brain weigh? Hello, curious kids! Have you got a question you’d like an expert to answer? Ask an adult to send your question to curiouskids@theconversation.edu.au