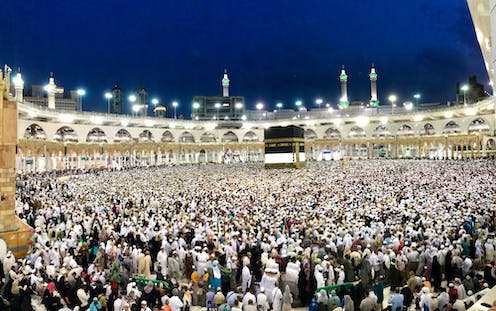 On Sunday, 2.4 million Muslims will gather in Mecca to perform the Islamic practice of hajj (pilgrimage). This year’s pilgrimage has been marred by regional politics and an unprecedented call to boycott the Kingdom of Saudi Arabia.

The boycott was brought to prominence in April when Libya’s Grand Mufti, Sadiq al-Gharawani, called on Muslims not to travel for the hajj, alleging the revenues were being used against civilians in the Yemen war. The boycott calls spread through social media, finding supporters around the world.

Estimates put Saudi income from the hajj at around US$16 billion a year. While important, this amounts to a relatively small 2% of Saudi GDP. Saudi Arabia also invests heavily in hajj infrastructure and associated services to cater for millions of pilgrims.

Read more: The Syrian war is not over, it's just on a new trajectory: here's what you need to know

The call to protest against Saudi Arabia on moral grounds is understandable. According to UN reports, the conflict in Yemen has adversely affected 24 million civilians, with 3.2 million, mostly children, needing urgent treatment for malnutrition.

Curiously, the Saudi military intervention in Yemen started in 2015 with the support of eight other Arab states, including Qatar, and backed by the US, UK and France. Four years of silence from Muslim religious and political leaders only to raise concerns now suggests deeper issues at play.

The negative turn in sentiment towards Saudi Arabia started with its role in the diplomatic and economic blockade of Qatar. Saudi Arabia and its supporters alleged that Qatar funded radical groups in Syria, supported Muslim Brotherhood activities that are often seen as a threat to regimes in the region, and collaborated with Iran, Saudi Arabia’s regional rival.

Qatar responded with an aggressive diplomatic and media campaign to discredit Saudi Arabia and its effective ruler, Crown Prince Mohammed Bin Salman. Qatar’s influential Al-Jazeera news channel labelled Saudi Arabia’s blockade of Qatar as unfair. It has published numerous articles holding Saudi Arabia responsible for the humanitarian crisis in Yemen and highlighting links that point to the Saudi regime and Prince Mohammed as the chief culprits in the murder of dissident Saudi journalist Jamal Khashoggi.

Qatar seems to be succeeding in the war to win hearts and minds. Negative sentiment towards Saudi Arabia and its leaders is growing in the Middle East.

Despite this, the call for boycott is not likely to make any significant dent in the hajj attendance. Saudi Arabia applies a 1% quota on the population of each country for attendance. There are always people on the waiting list desperate to make the journey. Most Muslims also do not like mixing temporal political issues with religious observances.

What is the hajj?

The hajj is one of the five pillars of Islamic practice. Every adult Muslim is required to perform hajj once in a lifetime if they can afford the journey. It is staged on the eighth to 13th days of Dhu’l Hijjah, the final month of the Islamic lunar calendar.

Literally meaning to set out for a place, the hajj refers to the annual pilgrimage Muslims embark on to Mecca with the intention of visiting holy places and performing prescribed religious rites.

Read more: Everything in Mecca gets 5 stars — and online reviews of other holy sites are wildly inflated, too

Rituals of the hajj include putting on a simple two-pieced cloth (ihram), prayers for forgiveness on the first day on the Plain of Arafat (20km from Mecca), a night visit and vigils at Muzdalifah on the way back to Mecca, then to Mina to throw pebbles at three pillars symbolising Satan, followed by a fast walk between the two hills of Safa and Marwah. Finally, pilgrims circle Ka’bah (the sacred cube building) seven times and finish with cutting their hair.

The hajj is about more than just performing rituals. It is a collective act of worship and a way of establishing a connection with the monotheistic legacy of Prophet Abraham and spiritual beginning of humanity with Adam.

What does the Quran say about the hajj?

According to Islamic tradition, on God’s orders Abraham left his wife Hagar and son Ishmail in the valley of Baccah after a dispute between his wives Sara and Hagar. Stranded and out of supplies, Hagar frantically searched for help and water by running seven times between the hills of Safa and Marwah. Miraculously, water gushed under the feet of baby Ishmael. The water became the well of Zam Zam, attracting nomads who eventually settled in the area to found the city of Mecca.

Abraham later returned with his teenage son Ishmael to build Ka’bah, the main cube-shaped building inside the Great Mosque of Mecca. This was a time when people began to develop city settlements around a large central temple dedicated to a pantheon of gods. Ka’bah was to be the monotheistic shrine alternative to the prevailing polytheism of the time.

Abraham began the tradition of pilgrimage with an invitation to humans from all corners of the world to visit the Ka’bah. The Quran says:

Remember, again, that We made the House (Ka‘bah) a resort for people, and a refuge of safety. Stand in the prayer in the Station of Abraham. And We imposed a duty on Abraham and Ishmael: ‘Purify My House for those who go around it as a rite of worship, and those who abide in devotion, and those who bow and prostrate in prayer.’

Mecca, and more precisely Mina, is also the place where Abraham attempts to sacrifice his son Ishmail in the Islamic tradition. Abraham and Ishmail were tempted three times with an apparition of Satan. Determined to carry out the sacrifice, they threw stones at Satan in three places, today marked by the pillars where pilgrims also throw stones hoping to cast out evil temptations within and commit to a more righteous life.

Over thousands of years, Abraham’s legacy was lost and Ka’bah became a storage house of tribal gods. With the triumph of Islam in Arabia, Prophet Muhammad cleared Ka'bah of idols and restored it as a shrine dedicated to one God. The hajj rituals were reformed to honour the legacy of Abraham, Hagar and Ishmael.

The spiritual significance for Muslims

The rituals of hajj convey a number of profound meanings and deliver spiritual benefits to pilgrims.

Believers obey the call of God by turning up in their millions at the time of pilgrimage. The central aims of worship – exalting, glorifying and praising God – occur individually and collectively.

The circling of the Ka’bah simulates the most common act of worship observed in the universe where things orbit a central point – an act common to electrons in atoms, and stars and planets in the cosmos. While God does not change, we change for the better by joining the constant flow of life around Ka’bah.

The main climax of the pilgrimage is when all Muslims gather on the plain around Mount Arafat. According to Islamic tradition, this is the place where the first man, Adam, and his partner, Eve, sincerely repented and received forgiveness for the mistake that brought them down to earth from paradise.

Muslims gather in the same place and time, as Adam and Eve did, to repent of their sins and to seek forgiveness. According to Prophet Muhammad, sincere pilgrims will rid themselves of their sins and attain the sinless state of a newborn.

The hajj addresses one of the most enduring of human weaknesses. The racism and tribalism of much religion is the foundation of intolerance. When Muslims all dress in the same simple white gown, all worldly status disappears.

During the hajj, Muslims see countless Muslims from all over the world. They truly appreciate that Islam is a universal religion that belongs to all humanity.

Pilgrimage is a total human experience. The hajj simulates the Day of Judgment when believers gather en masse in one place, wearing only a two-piece white garment. Seeing millions of people worship one God at one time in one place is powerful testimony for the existence and the unity of God.