Carnivorous plants intrigue people. It’s so out of place to our mental image of what “normal” plants should do.

On the outskirts of Darwin, bladderworts can be found feasting on aquatic animals such as invertebrates, insect larvae, aquatic worms, and water fleas.

Read more: The Albany pitcher plant will straight up eat you (if you're an ant)

A hapless animal will swim by, triggering the sensitive hairs at the front of the bladderwort’s bladder, which opens like a trap door. The rush of water into the trap carries the animal inside. The door slams shut and digestion starts.

This all happens faster than the eye can see – in less than a millisecond, more than 100 times faster than a Venus flytrap. 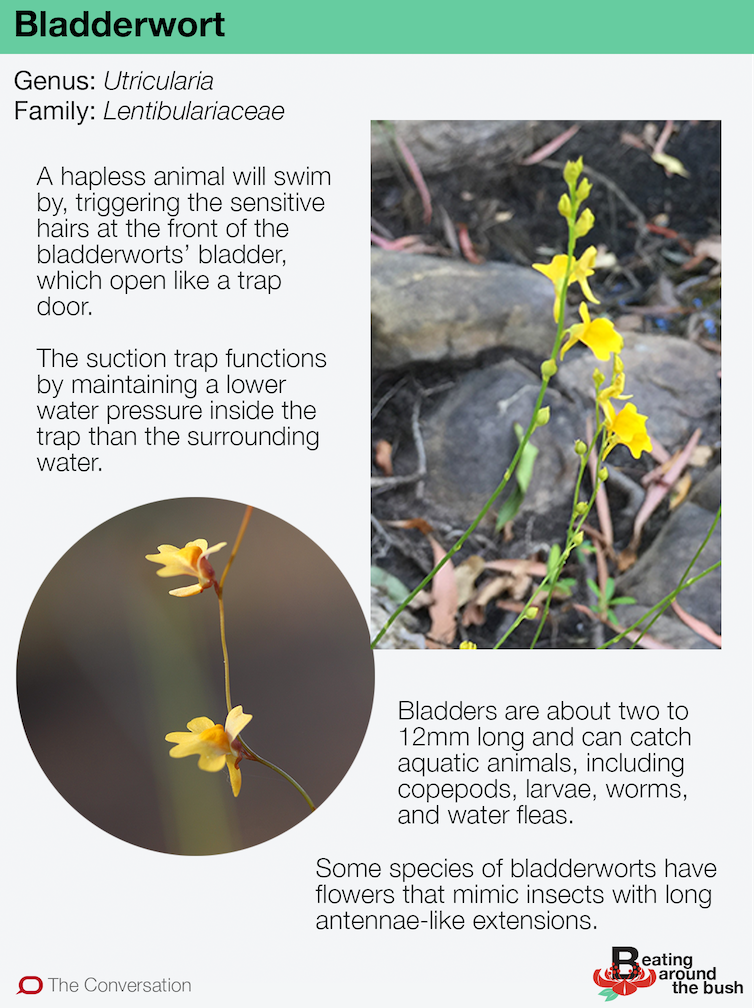 The Conversation The best habitat in all the (wet)land The bladderwort is just one example of Utricularia. Australia’s Top End contains some 36 species of Utricularia, making it a a global centre for the genus. And the species count is still going up as researchers make new discoveries. In particular, bladderworts can be found around the Howard River, about 30km east of Darwin, part of a 264 square km area of significant conservation value. Read more: Rising seas allow coastal wetlands to store more carbon The Howard River area supports the largest and most continuous stretch of seasonally-flooded sandy wetlands in the Northern Territory, with extensive shallow lagoons and swamps. The layer of fine sand is between 1 and 10 metres thick. The sand overlays less permeable material such as rock and clay, so the sand becomes completely waterlogged in the wet season. It makes a perfect home for bladderworts. This highly dynamic environment provides a miniature topography of rises and depressions measured in just centimetres. As well as the alternating monsoonal dry and wet seasons, the topography is overlain with seasonal changes in water levels. Read more: The waterwheel plant is a carnivorous, underwater snap-trap The species of Utricularia have adapted to different windows of opportunity in these seasonal changes and partition themselves within the habitat, often based on water height. 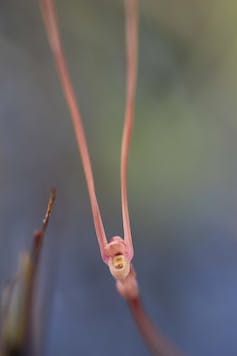 Some species of bladderwort have flowers that mimic insects. Pictured is Utricularia dunstaniae. Emma Lupin, Author provided (No reuse) Within the same small area, species come and go during the season based on their tolerance of these habitat variables. This can be frustrating for the collector and observer, as not all species are found at the one time. All shapes and sizes A unifying feature of the Utricularia genus is the suction trap – or “bladder”. But the bladderwort species come in many shapes and sizes. Flowers, for instance, can vary in size. Some bladderworts have flowers with large nectar-filled spurs. These can grow up to 15 millimetres long and attract insects with a long proboscis (an elongated “snout”). Other bizarre flowers on different bladderwort species have long antennae-like extensions and appear to involve insect mimicry to attract pollinators. Read more: Squid team finds high species diversity off Kermadec Islands, part of stalled marine reserve proposal Other bladderwort species, such as U. odorata, have tall, conspicuous groups of flowers up to 70cm high, with up to 20 bright golden yellow flowers. And aquatic species of bladderwort have, in some cases, even developed floats around the flowering stalk to keep the flowers above water. Threats to the Howard Sand Plains But all is not well on the Howard Sand Plains. The unique landscape is under threat from urban development, recreational misuse, fire, and weed encroachment. But construction booms in Darwin have created added pressure on the Sand Plains. Read more: Can we really restore or protect natural habitats to 'offset' those we destroy? Twenty-two per cent of the sand sheet landscape in this region has been cleared for sand mining, as it holds a huge source of easily accessible, fine, high-grade sand used in concrete for building. But it’s not all doom and gloom. A project, “Secret World: Carnivorous plants of the Howard sand sheets”, brought artists and scientists out into the field in a workshop setting. 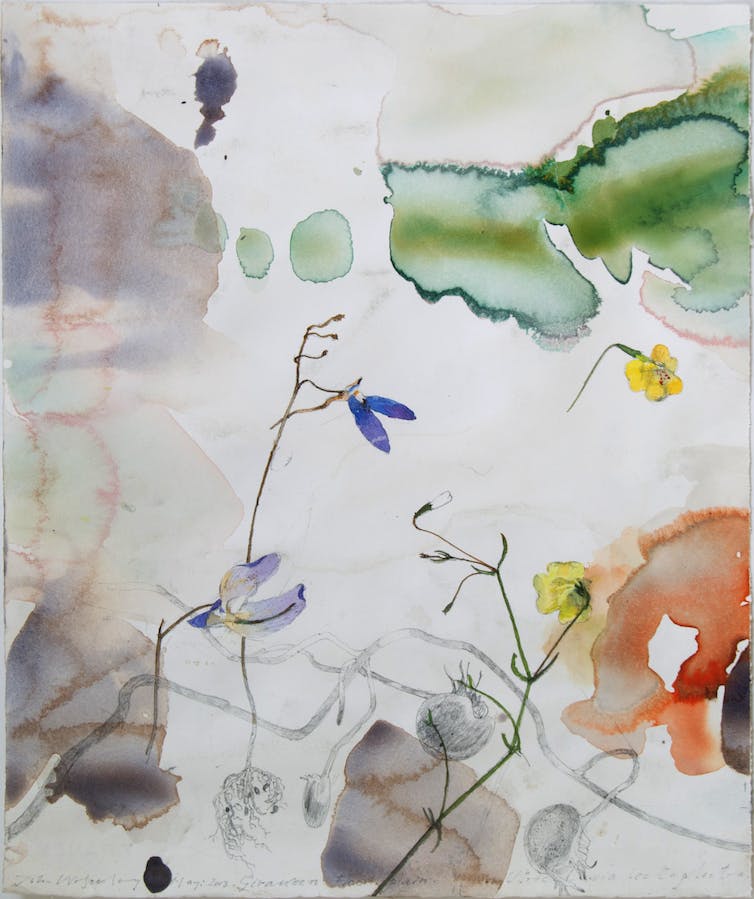 Bladderworts were the inspiration for stunning artworks, leading to education around the species in the local area. Bladderwort species 1 ..... by John Wolseley/Nomad Art Gallery, Author provided Scientists explained the significance of the environment, the flora and the threats facing the habitat. And the artists squelched about the waterlogged habitat and got down and dirty into this Lilliputian world. They set about interpreting the plants and with a diversity of approaches matching the diversity of the bladderworts, they produced a stunning portfolio of artworks. 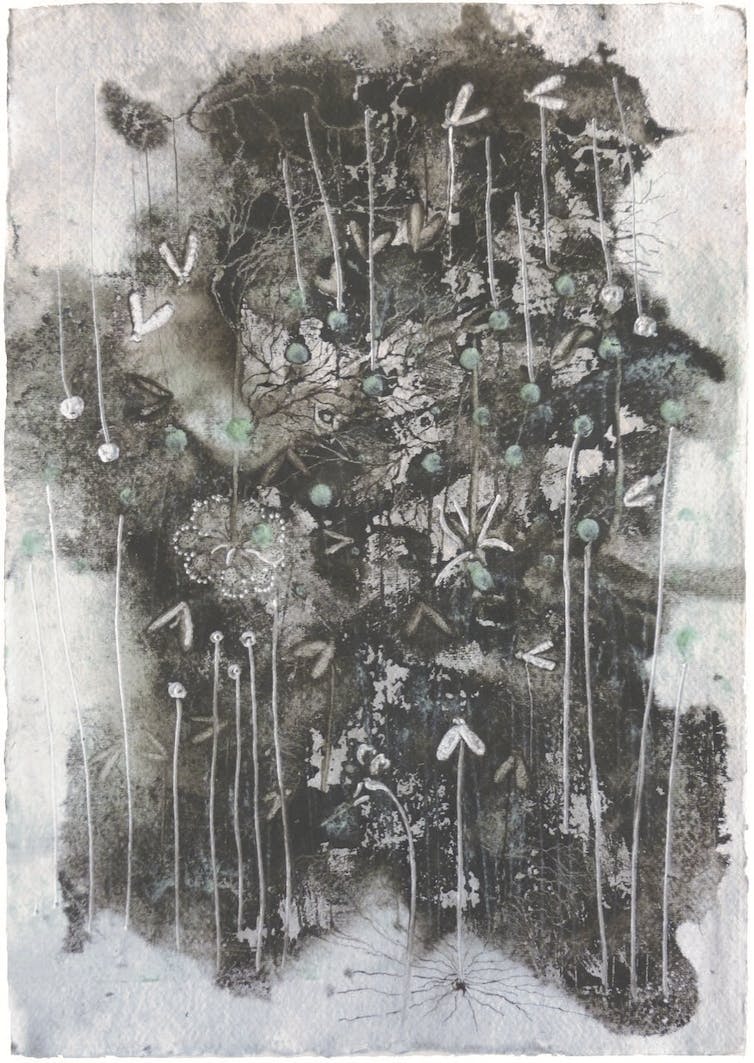 Artists who explored the waterlogged habitat of the bladderworts produced a stunning portfolio of artworks. Lunch by Winsome Jobling/Nomad Art Gallery, Author provided Read more: More than 28,000 species are officially threatened, with more likely to come An education kit produced from the project also took the story into local schools. The Northern Territory Environment Protection Authority assessed the issues and determined areas of the sand sheets that should be set aside for conservation purposes. The art and science collaboration certainly played a pivotal part in this positive conservation outcome.