A UN report released last week found a quarter of the world’s carbon emissions come from the food chain, particularly meat farming. This has prompted calls to sharply reduce emissions from agriculture and to feed the world on plant protein.

Can we feed a growing global population without increasing the amount of farmland? It’s tough, but certainly possible.

There might still be a place for meat animals in the many parts of the world unsuitable for growing crops. But governments around the world must turn away from heavily subsided but protein-poor cereals, and aggressively pursue legume production.

How much land do we have to work with?

In 1960, there was one-third of a hectare of farmland per person on the planet. By 2050 that will have fallen to 0.14 hectares, according to research at Michigan State University. This trend is a consequence of increasing population and urban encroachment. Most cities were established on arable land close to water supplies, and urban expansion continues to consume significant productive land.

About one-third of cereals produced globally now are fed to animals (mainly in Europe and North America, although this is changing across the developing world as incomes rise and demand for meat increases).

Converting these areas to food production would significantly improve the amount of plant protein available to people. Research has estimated some 16% of edible crops are diverted to biofuel production, and redistribution of these proteins and calories to people would also help immensely. However, biofuels are renewable and less polluting than fossil fuels, and therefore have potential to offset carbon emissions. 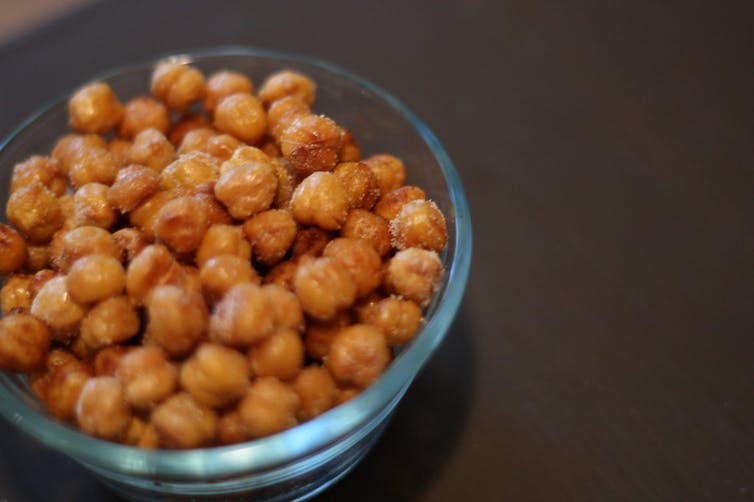 Legumes such as chickpeas are high in protein. lchunt/Flickr, CC BY-NC-SA

Nevertheless, we cannot completely discount animal protein. Around half the world’s land surface is rangelands, covering arid, semi-arid, and dry sub-humid climates. These areas are unsuitable for cropping, and many cattle and sheep are raised there.

They have traditionally been used for extensive pastoralism, and the meat produced there is more expensive than meat from feedlots, because of slower growth rates and higher transport costs. However, people are increasingly concerned with the provenance of their food, and may well be willing to pay more for single-origin food produced sustainably.

Next we must consider what crops we grow on this land. Continuing to grow maize and other low-protein cereal crops on land formerly used to provide feed or biofuel is unlikely to provide enough plant-based protein for an expanding population.

There must be an increase in the production of leguminous crops, such as peas and beans, that fix their own nitrogen and that provide nutritious grains high in protein. The grain of legumes is 20-30% protein, compared with 10% in maize, which is the most extensively grown cereal crop used for animal feed.

However, lifting the yield of legumes is a significant challenge as expenditure on the genetic improvement of these crops (except possibly soybeans) has been dwarfed by that spent on the major cereals. It is essential this component of the future global farming system becomes more productive and sustainable.

In rotation with cereals, legumes enhance the productivity of the entire farming system. According to research from Pulse Breeding Australia, legumes should make up 25% of global crops. We are far from achieving this target, with just 10% of cropping dedicated to legumes. 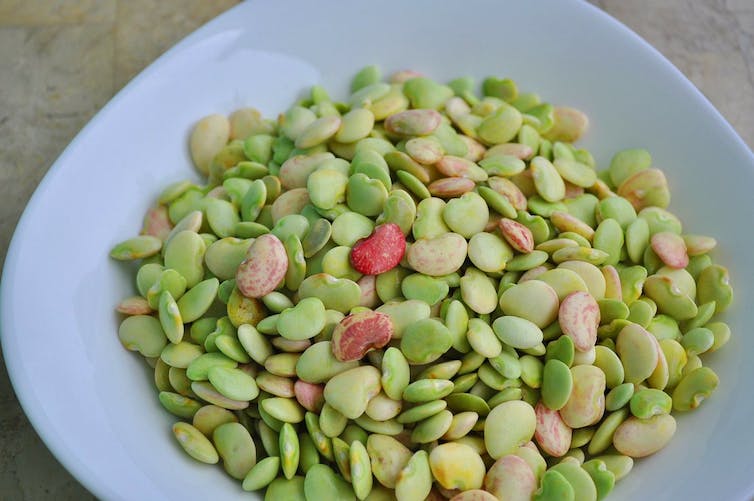 Legumes currently only make up 10% of the world’s crops. whologwhy/Flickr, CC BY

Unlike cereals, legumes are harder to grow and require more skilled management. Legumes are generally more susceptible to diseases, including viruses and insect pests, and are significantly impacted by temperature extremes and drought. As global warming increases, the difficulties associated with producing legumes are likely also to rise. More resources, therefore, will have to be invested in researching legume cultivation.

We can’t see the future

There are plenty of knock-on consequences of any major changes to our food chain. Phasing out feedlots for animal farming, for example, will reduce the effluent that often contaminates waterways and causes nutrient toxicity in nearby fields. This will increase the price of grass-fed meat.

The lower yields of legume crops, combined with government support for cereals in many countries, currently strangle their production. To increase crops, farmers will need incentives until increased demand can support higher prices. We must be prepared to pay more for vegetable protein, and vegan options may no longer be among the less expensive options on restaurant menus.

The current move to meat-like vegetable protein products is also unlikely to gain much traction in the longer term as the cost of processing these materials will reduce their appeal.

The transition to a world fed on vegetable protein will be made against a dwindling amount of land per person and an increasingly hostile farming environment in many areas.

Increasing temperatures will change disease patterns and traditional crops may no longer be viable in some regions. Governments will also need to reassess policies that favour the production of higher-yielding but protein-poor crops.

Feeding the world on plant-based protein is an incredibly complex proposition, with many variables we cannot accurately predict. But this should not stop us trying; it is certain that whatever the difficulties, they will be greatly magnified in a signficantly warmer world.

There is much complexity around the notion that we can feed the world on plant-based proteins and many variables we cannot yet accurately predict. However, this should not stop use from trying to achieve this outcome in whole or in part.