The blotched butterfly orchid (Sarcochilus weinthalii) looks fairly unremarkable when it’s not flowering, generally resembling the far more common orange blossom orchid. But when it flowers, it is exquisite. Dark purple blotches stand out on cream petals, resembling a flock of butterflies come to rest on rainforest trees.

Like the most of its genus, the blotched butterfly orchid is epiphytic, or an air plant: without roots, they absorb water from the air. The leaves are leathery and curved, and appear in groups of three to seven. They usually grow on the horizontal branches of tree hosts in dry rainforests in southern Queensland and northern NSW.

Australia has 18 unique butterfly orchids, a number of which are under threat. As they are easily grown by orchid fanciers, they are often removed from natural locations and are becoming harder to see in their natural habitat, high up on rainforest trees in hilly terrain. 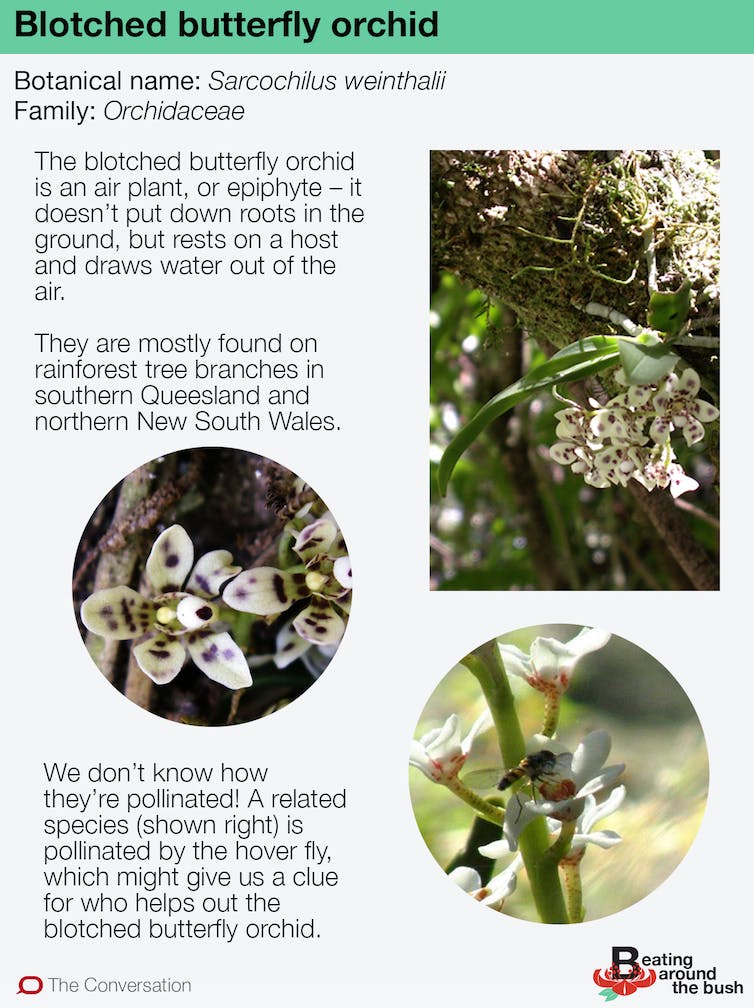 The Conversation The genus Sarcochilus was named by Robert Brown, the naturalist on board the Flinders expedition documenting the east coast of Australia in the early 19th century. The name refers to the fleshy labellum, the showy front petal of the flowers. The blotched butterfly orchid, Sarcochilus weinthalii was first collected by Ferdinand Weinthal, a notable early Australian orchid collector and grower near Toowoomba in southern Queensland in 1903. My colleagues and I have been trying to learn more about the biology of these beautiful orchids, to help improve conservation efforts. We are studying populations sizes, life cycles, host trees and similar species in an effort to learn more about how and where they grow – and what might be pollinating them. The total number of plants at our study locations is less than 200 individuals which is concerning. More troubling is now the complete absence of plants from several regular sites for the orchid. The presence of juvenile plants at the study locations suggests the remaining populations could still be viable, albeit with the spectre of inbreeding depression hovering over the smaller groups. The orchid was quite adaptable to different tree hosts although there was preference for native hydrangea (Cuttsia viburnea) at one site. Plants grew on the southerly (shaded) side of their hosts, at heights varying from more than 4 metres above the forest floor to less than one metre above soil level. These latter plants were growing on a basalt boulder – something never recorded before. Fungus friends As part of our research we sampled the roots of the orchid and isolated a symbiotic fungus, identified by DNA analysis. Analysis of the fungal DNA showed something quite striking. Every orchid, from every location, had exactly the same fungus growing in its roots. When orchid seed was combined with the fungus in the laboratory, plants grew considerably faster than controls. This suggests that both life stages of the plant require the fungus to provide nutrients. This fungus will be integral for conservation efforts for the species. Strong growth of seedlings in labs and greenhouse will require the fungus to be present. Restoration efforts will need to check for the presence of the fungus to ensure transplanted populations thrive, and to support new seedling growth in re-established orchid populations. We observed a number of insects visiting flowers of the blotched butterfly orchid, but most of these were small and unlikely to be capable of pollinating the species. Previous research suggests Sarcochilus orchids are pollinated by native bees. What is the future for the blotched butterfly orchid? In another species of Sarcochilus we have studied, S. hartmannii, we saw hover flies regularly visiting (and possibly pollinating) these orchids. So it’s feasible these insects are pollinating the blotched butterfly orchid as well – but we need more research to be sure. Our work also found the orchids are vulnerable to land clearing, an issue that threatens many native Australian plants. Clearing not only destroys individual plants or populations, but provides conduits for the entry of aggressive exotic plant species like cat’s claw and climbing asparagus into fragile ecosystems. Read more: Leek orchids are beautiful, endangered and we have no idea how to grow them And unfortunately, the blotched butterfly orchid grows outside national parks (as well as inside them), which makes them hard to protect from orchid collectors. Perhaps weightier fines are necessary to change the minds of recalcitrants who still believe collecting native plant species from the wild is acceptable!