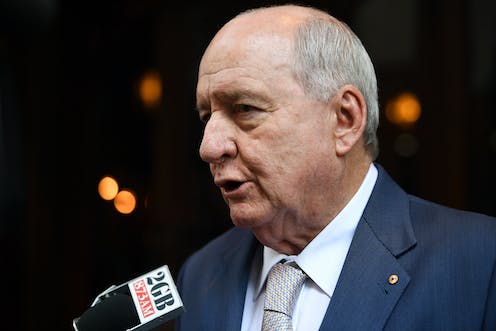 This perception of power, in turn, gives him actual power.

Yet the author and social researcher Rebecca Huntley is reported as saying:

Fifteen years of research and I haven’t found Alan Jones to be that much more influential with voters than ABC Radio or The SMH. He is only powerful because politicians think he is.

So if evidence that he actually shifts votes is hard to find, how did this phenomenon develop?

Developments in media-political relations over the 34 years that Jones has been broadcasting give some pointers.

He was a pioneer in what has become known as the outrage industry. He rants and raves in extraordinarily fluent broadsides, captivating in their aural power and – to a listener of a certain type – intoxicatingly persuasive.

This listener is typically in the autumn of life and living in the western suburbs of Sydney, where a tough life has bred cynicism about politicians, bureaucrats and big companies.

Early on, Jones tapped into this sentiment, becoming the champion of what he called “Struggle Street”, although he himself lived in an apartment overlooking Circular Quay and the Opera House.

His ratings rose and so did his perceived capacity to win over the hearts and minds of Struggle Street.

By the late 1990s, companies that were on the nose with the public, like Telstra and some of the banks, began to see that he might be able to change public attitudes towards them, if his commentary about them could be made to look like his honestly held opinion.

In fact these commentaries were paid for, but this was not disclosed to the audience, and so in 1999 Jones, along with several other high-profile talkback hosts, were caught up in what became known as the cash-for-comment scandal.

Despite adverse findings against him by the regulator at the time, the Australian Broadcasting Authority, belief in his power to sway audiences remained undiminished.

A few weeks after these findings were announced, he hosted an event for then Liberal Prime Minister John Howard, and dined with the NSW Labor Premier, Bob Carr, to discuss matters of government policy.

At Radio 2UE, where Jones was then working, the revenue generated not just by conventional advertising but by the cash-for-comment arrangements, had made Jones’s position there impregnable.

And when he switched to 2GB in 2002, he became an instant rainmaker for his new station, and equally impregnable there, free of management constraints and therefore in a position to play favourites and create enmities with whomever he chose.

His core audience – those on “Struggle Street – were then given special attention by the prime minister, and came to be known as "Howard’s battlers”.

For the entirety of his prime ministership, from 1996 to 2007, Howard made a point of cultivating Jones, and became a favourite. A former colleague of Jones, Mike Carlton, has been quoted as saying that there was allegedly an operative in Howard’s office dedicated to working on what were called “Jones issues”.

Whether this was true or not, Howard became a regular guest on the Jones program, saying it gave him a chance to speak directly to the Australian people rather than having his message filtered by sceptical journalists.

A prime ministerial imprimatur of this kind is calculated to increase perceptions of political power.

Then, just as Howard was departing office in 2007, the phenomenon of social media was gaining momentum in Australia.

It turbo-charged the outrage industry, and Jones was skilled up to take advantage of this new libertarian free-for-all.

He had already been found in 2005 to have breached the radio industry code of practice by inciting violence against people of Middle Eastern ethnicity in a series of incendiary broadcasts leading up to the race riots at Cronulla that year.

But as usual, the broadcasting regulator, now called the Australian Media and Communications Authority, contented itself with entering into a “dialogue” with 2GB.

Then, in 2012, he gave encouragement to the idea that Julia Gillard should be put in a chaff bag and dumped at sea. Once more there were no consequences.

And now, in 2019, he is encouraging Scott Morrison – already known as the 2GB Prime Minister – to shove a sock down the throat of the New Zealand Prime Minister Jacinda Ardern.

Three strikes, but still not out.

Finally, however, there is a sign the 2GB management might have begun to ask themselves whether Jones has outlived his profitability.

They have warned him that one more rant like that and they will terminate his contract.

It cannot just be that a swag of big advertisers have abandoned the Jones program. This has happened in the past when he has committed some atrocity, but they drift back after the hue and cry has died down.

Read more: Sexist abuse has a long history in Australian politics – and takes us all to a dark place

However, last year Jones cost the station A$3.75 million in defamation damages, plus millions more in legal costs after he wrongly and persistently accused the owners of a quarry in the Queensland town of Grantham of causing the deaths of local people who died in the 2011 floods.

At the time of writing, Macquarie Media, which owns 2GB, is being purchased by Nine Entertainment, which already owns the Nine TV network and the big mastheads of the old Fairfax company, The Age, The Sydney Morning Herald and the Australian Financial Review.

It may be that this takeover will add a reputational dimension to the assessment of Jones’s value to shareholders.

If Jones does finally come to grief, it will be because of considerations like these, not because of any damage he does to the social fabric.