Police stormed the students’ dorm and used teargas to force them out, while bystanders and officers called them “monkeys”, a derogatory term for ethnically Melanesian Papuans.

West Papuans have long been cast by Indonesians as primitive people from the Stone Age, and this racist treatment continues to this day. West Papuan author Filep Karma described the extent of racism against West Papuans in his 2014 book, As If We Are Half-Animal: Indonesia’s Racism in Papua Land, saying he often heard Indonesians call West Papuans monkeys.

After the students were detained last weekend, riots erupted in the cities of Manokwari and Jayapura. Thousands of people turned out to protest against the mistreatment of the students and, more broadly, the mistreatment of West Papuans by the Indonesian authorities. Many protesters waved the nationalist Morning Star flag, an act punishable by a 15-year jail sentence (Indonesia is not just sensitive about how West Papuans treat the Indonesian flag – the state prohibits them from flying their own.)

In response to the deteriorating security situation, Indonesia has deployed more troops to the region. 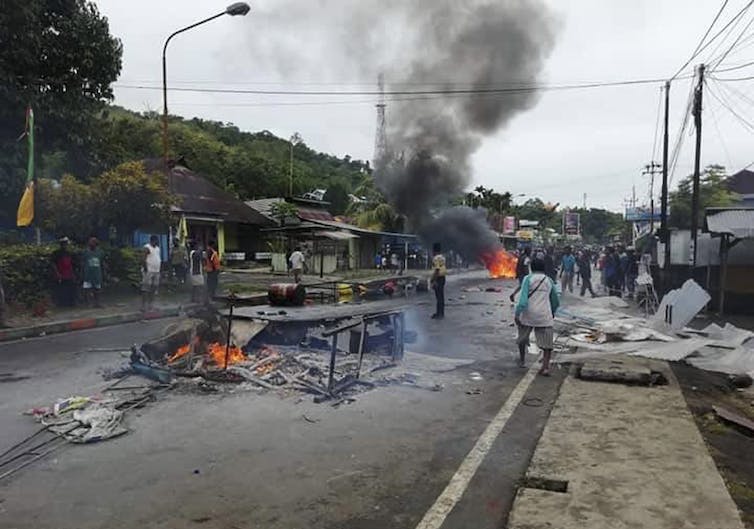 When the politically moderate Indonesian President Joko Widodo came to power in 2014, West Papua observers had high hopes he might broker peace in the region, much the same way the government of his predecessor, Susilo Bambang Yudhoyono, was able to quell a long-running separatist conflict in Aceh.

However, Widodo has not been capable of controlling the Indonesian military in West Papua. He also doesn’t seem to realise that economic development is not the solution to ending the armed resistance in the region – West Papuan leaders want a political resolution, not an economic one.

Part of Widodo’s development agenda in West Papua has been to commence building a Trans-Papua Highway to facilitate movement of goods and people across the astoundingly rugged terrain in the region.

Read more: Papuans and Jokowi are hostage to Indonesian politics

But in December, West Papuan guerrilla forces attacked Indonesian workers constructing the highway, killing several dozen. There’s deep resentment among West Papuans toward Indonesian migrant workers, who they believe are taking their jobs and land and disrupting Papuan life in the region.

Violence by the Indonesian military and police against West Papuans has also increased during Widodo’s presidency. According to the International Coalition for Papua, a human rights organisation, more than 6,400 people were arrested for political activism in 2015 and 2016. The group has also documented more than 300 victims of torture or maltreatment and 20 victims of extra-judicial killings for those years.

In addition, local journalists continue to face harassment from security forces, while foreign journalists are still denied entry to West Papua. Preventable diseases and malnutrition have also had devastating effects throughout the region.

In 2017, Widodo finally reached out to West Papuans offering dialogue – a process West Papuans had been requesting since at least 2008. However, the leaders of the United Liberation Movement for West Papua (ULMWP) decided it was too little, too late.

West Papuans are now calling for a UN-supervised referendum on independence from Indonesia.

In 1969, seven years after Indonesia invaded West Papua, the United Nations oversaw a referendum in which West Papuans were to decide on independence or official integration with Indonesia. Indonesia handpicked less than 1% of the Papuan population to vote and threatened them with violence should they make the “wrong” decision.

The result has been a lengthy, often brutal colonial occupation of Papuans and their land.

Independence advocates have the support of at least seven Pacific island nations – as well as a number of MPs in New Zealand – as they pursue the possibility of a new referendum on decolonisation through the United Nations.

Through revived links with global Black Power and Indigenous movements in the Pacific and beyond, as well as the mass connectivity afforded by social media, Papuans are enjoying levels of solidarity from around the world they have never before experienced.

While independence is still unlikely for West Papua, it would be foolish to rule it out. Timor Leste, South Sudan and Kosovo have shown us that right to self-determination is one that is still honoured, even if infrequently.

Read more: All the ingredients for genocide: is West Papua the next East Timor?

Why does West Papua matter?

Why should the world care about this little-known decolonisation movement?

The answer is simple: In the post-Rwandan genocide world, the international community has committed to a moral and political “responsibility to protect” people whose states are unable or unwilling to ensure them safety, or are perpetrating crimes against them.

The United Nations “responsibility to protect” mandate means that UN members are required, under international law, to protect anybody at risk of

It is time the world lives up to its responsibility to demand that state-sanctioned violence against West Papuans stop, no matter how bad relations with Jakarta become. Ultimately, lives are worth more than politics.