As the abortion decriminalisation bill gradually makes its way through the NSW parliament, opponents have been increasingly drawing on their long relationship with the right-to-life movement in the United States to lobby against the measure and try to push for more restrictive amendments.

This has been a trend in the anti-abortion movement in Australia for a while now. Activists have adopted some of the most successful elements of the US movement’s rhetoric and tactics in recent years in an effort to influence the debate in Australia.

The Australian public is strongly pro-choice. In a 2018 survey of NSW residents, 73% supported full decriminalisation of abortion. A 2015 poll, also conducted in NSW, indicated that 87% believe a woman should be able to have an abortion, with only 6% opposing abortion in all circumstances.

The Australian right-to-life movement is tiny compared to the US, but their views have an outsized place in the abortion debate because of their vocal political and religious allies.

Less understood is their successful borrowing from the examples and experiences of international right-to-life movements, particularly in the US. 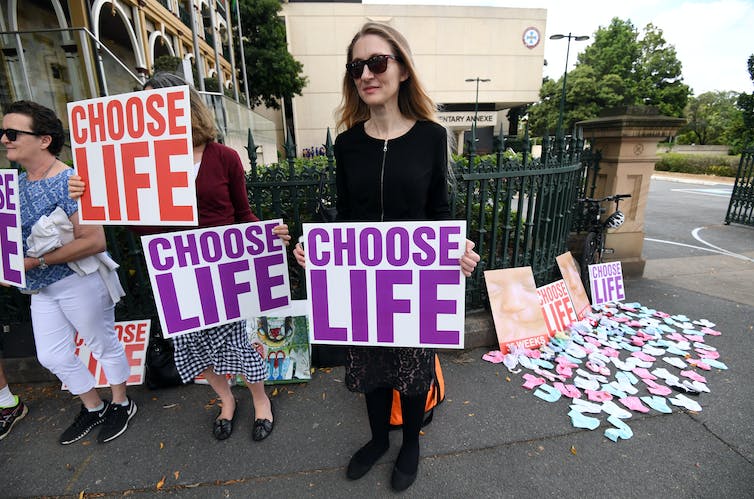 American abortion opponents have long positioned themselves as leaders in a global cause. They pursue both a national and international agenda, seeking to sharply limit access to abortion around the world, with the ultimate aim of banning the procedure.

At an international level, they advance this goal via measures such as the “global gag rule”, which prohibits international NGOs that receive American aid from providing advice, counselling, or information about abortion.

Read more: Here's why there should be no gestational limits for abortion

Australia is a part of this transnational network. Protest groups that target local abortion clinics, such as Helpers of God’s Precious Infants and 40 Days for Life, are chapters of US organisations. And for decades, even groups without direct ties to the US have hosted prominent American opponents of abortion, seeking to learn from their example.

In 2015, Right to Life Australia made the controversial choice to invite prominent anti-abortion activist Troy Newman of Operation Rescue for a national lecture tour. He ultimately had his visa cancelled and was deported, in part because his writings have questioned why abortion doctors are not executed.

There have been some efforts to foster the polarised and divisive US style of abortion politics here, too. Religious historian Marion Maddox says that under Prime Minister John Howard, conservative politicians tried to import the “family values” rhetoric and policies of the US Republican Party on issues like abortion and gay rights.

As decriminalisation efforts have progressed in Australia, these overseas connections have become quite explicit.

After South Australia Greens MP Tammy Franks introduced a decriminalisation bill in that state’s Legislative Council last year, her staffers received verbally abusive phone calls and threats of rape from Canadian abortion opponents. According to her staff, all members of the Legislative Council were then spammed with over 4,000 right-to-life emails, which they suspected came from the US.

Earlier this year, anti-abortion activists from the US, including the chair of 40 Days for Life, also brought their lobbying efforts directly to Adelaide. They met with several MPs to discuss ways they might assist in the fight against a bill to fully decriminalise abortion in the state.

The current decriminalisation debates in Australia have included a new focus on specific measures aimed at partial restrictions on abortions – a strategy that has been very successful in many US states.

Read more: After 119 years, NSW is set to decriminalise abortion. Why has reform taken so long?

In reality, the gestation limit in the NSW bill is modelled on legislation passed in Queensland in 2018. It allows abortion up to 22 weeks, and after that with approval from two doctors. This is a lower cut-off than the laws in Victoria and the ACT.

The NSW bill is also more restrictive than the law in comparable Western countries. The gestation limit in Britain is 24 weeks, with access available after that point for reasons of severe foetal anomaly or life-threatening risk to the mother. In the US, Roe v Wade prevents outright bans on abortion before foetal viability (interpreted as 24 to 28 weeks), while Canada has no upper gestation limit.

This focus on “late-term abortions” emerged as a strategy in the US almost three decades ago.

By the early 1990s, American right-to-lifers had failed in their primary goal of overturning Roe v Wade. So, they refocused their energies, seeking first to outlaw a comparatively rare technique they dubbed “partial-birth abortions”. More recently, they have sought to prevent terminations after 20 weeks using the medically contested notion of foetal pain.

Focusing on later terminations allows opponents of abortion to insist that the foetus possesses unique rights and subjectivity that override those of the pregnant person. Further, the gestational point at which an abortion becomes “late” is contested and ever-shifting terrain, allowing for opponents to push for a lower and lower limit.

When discussing these types of terminations, opponents also rely on emotive, inaccurate, and often disturbing language and imagery.

Yet, only 1% to 3% of abortions in Australia occur after 20 weeks, the majority of which are performed for reasons of severe or fatal foetal anomalies.

In Queensland, South Australia, and NSW, opponents of abortion have also raised the spectre of sex-selective abortions.

This concern also originates from outside Australia. In the 2000s, the US right-to-life movement began framing abortion as a form of discrimination, warning of abortions conducted on the grounds of sex, race, or disability. Eight states subsequently banned sex-selective abortions.

In the 2010s, this approach received further amplification after The Telegraph published a series of articles insisting the practice was rife in the UK and that pro-choice feminists had turned a blind eye to a generation of “lost girls”.

Read more: A concise history of the US abortion debate

In an attempt to appeal to critics in her own party, NSW Premier Gladys Berejiklian has expressed a willingness to ban “gender selection” abortions in NSW, though it appears unlikely the bill’s supporters will agree to an amendment.

Studies in the UK, US, and Australia have found no conclusive evidence that such abortions are occurring.

Rather, these campaigns work to stigmatise and vilify abortion care providers by accusing them of committing gendered acts of violence. And they suggest that medical professionals need to subject certain immigrant communities to more stringent forms of monitoring and surveillance. 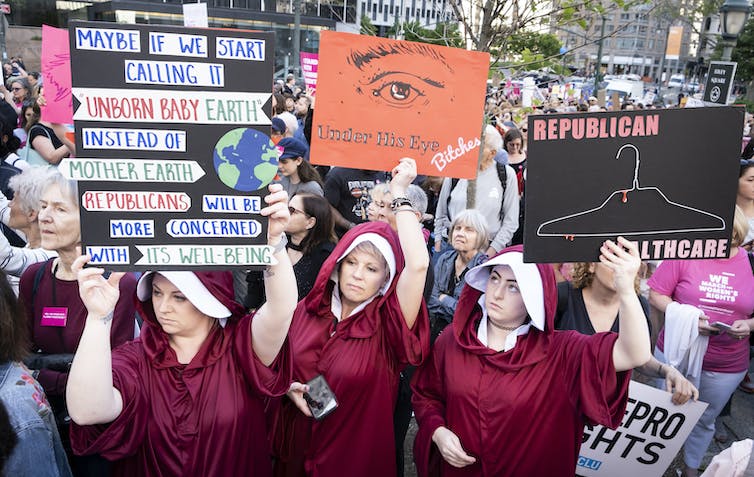 The subtle impact of these tactics

Collectively, these more covert right-to-life strategies have been part of a massive erosion of abortion rights in the United States.

In an Australian context, they work in more subtle ways. They prevent abortion being treated as just another type of health care, one of the explicit goals of the current decriminalisation campaigns.

They require doctors to assess and judge a pregnant person to see if they really want an abortion. And they inject uncertainty and attach further stigma to the work performed by abortion care providers.

Unable to wind back the clock on decriminalisation, Australian activists still insist abortion is a problematic and exceptional procedure. And they are drawing from the US right-to-life movement to shape how it is culturally, medically, and legally understood in Australia.