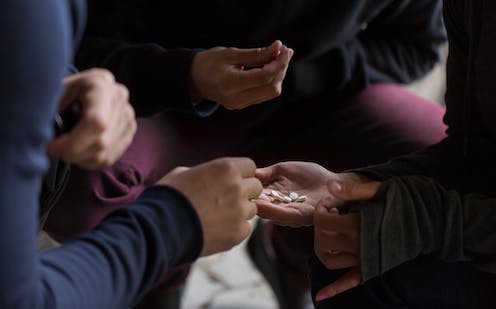 New Zealand passed the Misuse of Drugs Amendment into law last month, giving police discretion to take a health-centred approach rather than prosecuting those in possession of drugs, including class A drugs like methamphetamine, heroine and cocaine.

The new law also classifies two synthetic cannabinoids as class A drugs and allows for temporary drug class orders to be issued for emerging substances.

The New Zealand Drug Foundation hailed the amendment as “a massive leap” towards treating drug use as a health issue, while the New Zealand Police Association argued that it would essentially decriminalise the possession of class A drugs.

Drug use remains a criminal offence in New Zealand – police “discretion” not to prosecute is not tantamount to decriminalisation. I argue that the law change is a positive step towards a health and social response to drug use and misuse, so long as it doesn’t get lost in translation.

Read more: Drug laws on possession: several countries are revisiting them and these are their options

The amendment requires police to use their discretion not to prosecute when they find someone in possession of an illicit drug for personal use. Police are directed to consider whether prosecution is required in the public interest or whether a health-centred approach would be more beneficial.

The law change is one of several related government initiatives. The previous amendment, passed in December 2018, enabled the development of a medicinal cannabis scheme and legal defence against prosecution for terminally ill patients. And a referendum on recreational cannabis legislation will be held in conjunction with the 2020 general election.

These measures are in keeping with Prime Minister Jacinda Ardern’s decision not to join US President Donald Trump’s “war on drugs”. Instead, Ardern said New Zealand would pursue a “health-based” approach.

While driven in part by a shift in government policy, the amendment was also a response to the chief coroner’s report highlighting that 55 or more people died of synthetic cannabinoid drugs in the past two years. Two of the most dangerous of these, AMVB-FUBINACA and 5F-ABA, have been reclassified as class A drugs. Provisions have been made for temporary class drug orders to control new and potentially harmful drugs.

This will mean increased investigative powers for police and heavier sentences for importers, manufacturers and dealers of these substances. It will also enable government to react quickly to emerging high-risk drugs.

To support the new legislation, the government has increased funding for addiction treatment services and is establishing a multi-agency drug early warning system. The amendment emphasises a health response to personal drug use. It applies to all classes of drug.

In practice, police already exercise discretion not to prosecute and have been doing so increasingly in recent years. Police charges for cannabis possession or use have fallen 70% in the past decade. On the other hand, drug offences for methamphetamine possession or use have risen sharply. Last year, for the first time, they outnumbered cannabis charges.

Overall, thousands of people continue to be convicted each year for minor drug use or possession. These people are disproportionately young and Māori.

There is no evidence that convicting and sentencing drug users reduces drug use overall or benefits them individually. To the contrary, criminal convictions often have adverse consequences for career and life opportunities. The costs to the criminal justice system and taxpayer are considerable.

Potential outcomes of the law change

The devil is in the detail. Reduced fear of prosecution will probably lead more people with drug-related problems to seek professional help. Potentially thousands who come to police attention will avoid being prosecuted each year. Instead, many will receive treatment and other forms of support that change their lives in positive ways.

Police and the courts should be freed up to focus on serious drug-related offences and other crime. The proportion of Māori being sentenced and imprisoned should reduce.

But these outcomes depend greatly on how police exercise their discretion not to prosecute. A huge shift in police culture, mindset and professional skill is required. The outcomes presuppose that accessible, specialist addiction and support services are readily available.

The recent government Inquiry into Mental Health and Addiction noted severe strain on existing services and called for an expanded range of treatment and detox services. This depends not only on additional funding, but requires strong leadership and significant change in the size and composition of New Zealand’s addiction-related workforce.

The amendment’s other provisions should help address the devastating impacts of new substances. The rate of their development will most likely accelerate, and some may be as, or more, dangerous than AMVB-FUBINACA and 5F-ABA. The effectiveness of the multi-agency early warning system will be critical in rapidly identifying these drugs.

While regarded as a significant step in the right direction, many see this and the December 2018 amendment falling far short of being a comprehensive health and social response to drug use and misuse. Both the Law Commission in 2011 and the Inquiry into Mental Health and Addiction in 2018 called for a complete rewrite of the Misuse of Drugs Act (1975).

Drug use remains a criminal offence, even for terminally ill patients. Police discretion means that many people are still being arrested for possession and personal use of cannabis and other drugs. Māori could well continue to be unfairly targeted.

Many drug users are reliant on criminal gangs for supply. This both sustains gangs and other criminal operators, and brings users under the influence of dealers who can encourage progression to more harmful substances and criminal activity to sustain their drug use or addiction.

The upcoming referendum may in part address this in relation to cannabis. But more far-reaching reform will be required across the full spectrum of substances. In the interim, new measures will need to be carefully monitored and adapted to ensure that they conform with their intent.