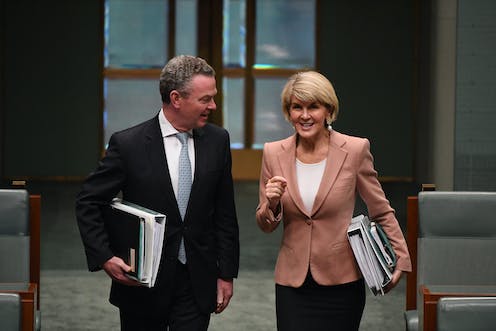 Recent jobs taken by former senior ministers Julie Bishop and Christopher Pyne have brought on ire of the Australian Senate, which is now concluding an inquiry into the matter.

The testimony before the inquiry has been extraordinary: not just for what was said, but for what wasn’t — Australia’s lobbying laws are almost totally ineffective.

The Senate’s reaction reflects a wider sense in the electorate that elected officials may be putting their own interests ahead of the nation’s. As a result, trust in government and its institutions has been falling.

Read more: Australia's lobbying laws are inadequate, but other countries are getting it right

Moreover, Bishop and Pyne’s example reflects an increasingly common problem, in which senior decision makers go on to lobby for the same organisations they once made decisions about. This problem — called the “revolving door” — is severely undermining efforts to regulate corruption and lobbying, and little attention has been paid to the matter by our major parties.

The regulation requires that ex-ministers not lobby members of government, the public service or defence force on matters relating to their former portfolios, and can not take advantage of privileged information recently gained in their role as minister. This applies for 18 months after they have left their roles.

In spite of this, former foreign minister Bishop took a role at one of the government’s biggest private aid contractors, Palladium, and former defence minister Pyne took a role with consulting firm EY to help build its defence business.

When asked to about these roles, both suggested they were not breaching the lobbying code, as they would not lobby for their clients.

And the person who was responsible for oversight, head of the prime minister’s department Martin Parkinson, agreed, telling the senate that there “was no evidence” that they had breached the code.

This is telling, and rests on the belief that to be a “lobbyist”, you must be active and explicit in representing your clients’ interests to government. But it also misses the point of our revolving-door prohibition.

The philosophical basis for prohibiting a minister from taking positions like Bishop’s and Pyne’s rests on three basic problems: the potential for bias, unfair access to former colleagues or subordinates, and the insider information a decision-maker has gained from their former role.

Perhaps the biggest problem is that of bias, which Parkinson’s testimony effectively ignored. There is the potential for a decision-maker to know — or even expect — that they will be later employed by the same companies and individuals that benefit from their decisions.

There is no accusation here that any recent ministers have engaged in such a subtle form of corruption. But that is also the problem: it would be impossible to know if it had.

Our laws require an explicit quid pro quo arrangement (that is, an obvious bribe) to have existed for someone to be found in breach of them. Short of someone confessing to the matter, this is very hard to prove. The days of “brown bags of cash” are largely gone, but it’s worth thinking of how the idea of a well-paying job might be similarly corrupting.

This is why the necessary response to the problem of the revolving door is to prohibit it (sometimes for up to five years), and have an independent regulator enforce the lobbying regime.

Changing the rules of the game

Aside from its inquiry into Bishop and Pyne’s new jobs, the Senate has just passed a bill legislating for a federal Independent Commission Against Corruption (ICAC), to be called an Integrity Commissioner, to oversee lobbying regulation.

Read more: Lobbying 101: how interest groups influence politicians and the public to get what they want

This is important, as the prime minister’s department and attorney-general’s office have shown that they are unwilling to aggressively enforce the lobbying code. Since the code was adopted in 2008, there have been no recorded breaches, but this hardly reflects the absence of wrongdoing. Rather, as Parkinson inadvertently pointed out, the code is so narrowly worded that breaches are barely possible.

Beyond this, the question is what would happen if a genuine breach was discovered?

The answer is probably nothing. No part of the code sets out penalties. The most stringent punishment that could be dealt would be to deregister a lobbyist (even though many skirt this system altogether), or block a lobbyist’s access to decision-makers. Neither of these possible remedies has ever been used.

In other words, even if a national integrity commission is created, any lobbying laws it oversees would need to be dramatically improved.

Lobbying and the ‘marketplace of ideas’

There is an ideal of democracy based on the “marketplace of ideas”. In this ideal, a population hopes that ideas are heard equally and fairly, but that best ideas are the ones acted on. This is an important ideal, but it is only an ideal.

So, the challenge is to make the system as fair as possible. The current lobbying system doesn’t get close. Instead of ideas being presented to decision makers on “merit” (however defined), it is most easily accessed by those with the closest relationships to government. Consequentially, the current lobbying regime undermines Australia’s democracy.

Fixing this problem is not easy, but is doable. This requires major reform, but the path to such reform is clear – not a challenge of feasibility as much as of political will.