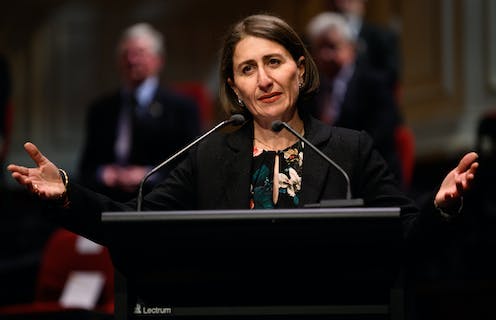 “How good is Gladys Berejiklian?” Prime Minister Scott Morrison asked a jubilant crowd of Liberal supporters on the evening of her March 23 2019 state election win. Only as good as her most recent legislative adventure, it would seem.

When, barely six months ago, the NSW Liberal premier returned the state’s Liberal-National coalition for a third term, a leadership spill was the furthest thing from the minds of her supporters and detractors. She had defied a strong challenge from Labor and federal political distractions to secure a narrow win and contain the carnage for her Nationals partners to a handful of seats.

Read more: NSW Coalition scrapes back in as minor parties surge – but delivering on promises will not be easy

But a leadership spill is precisely the scenario three of her party-room colleagues — Lou Amato, Tanya Davies and Matthew Mason-Cox — attempted to force upon her late in the evening of September 16. Their chief rationale? The premier’s failure to act on their concerns

by stopping the fast-tracking of [an] abortion bill and immediately establishing a joint select committee into abortion law reform in NSW.

The rebels withdrew the spill threat ahead of a September 17 party-room meeting, claiming they’d been promised

further concessions will be forthcoming in relation to amendments to the abortion bill.

Any chance of concessions to the bill went out the window last night when they started this. We don’t negotiate with terrorists.

Clearly the matter is anything but resolved.

How is it a political leader with freshly consolidated electoral support, a budget in surplus, low trending unemployment and record infrastructure investment found herself so publicly undermined by backbench colleagues in such an 11th-hour stunt? The reasons are diametrically simple and complex.

At a basic level, the events are an airing of protracted and unresolved factional tensions within the National and NSW structures of the Liberal Party. Moderates and conservatives are in a battle for the soul of the party. This thwarted spill proves that even electoral success has not resolved that destructive impulse.

At last year’s Liberal federal council, the party’s conservatives put forward motions to, for example, sell off the ABC and move Australia’s embassy in Israel to Jerusalem. At the NSW branch level, preselections are no longer simply fraught, they verge on out-and-out warfare, resulting in allegations of bullying and intimidation.

From a less partisan and broader ideological standpoint, single-issue or emblematic politics — a lens through which many view the abortion bill — is rearing its head to an unprecedented extent globally. It is apparent in Brexit, where crashing out of an economic union is proxy for the perceived failure of trickle-down economics.

Take Tanya Davies’ scenario where she contends with an electorate of pronounced social conservatism. Rates of Catholicism are nearly twice the national average in Davies’ outer western Sydney electorate of Mulgoa. The rate of Mulgoa residents identifying as being of “no religion” is almost half the national average. It is this electoral picture that may be emboldening Davies to take a strong stance on certain issues, even if it means not toeing the party line.

Parliamentarians appear to feel increasingly compelled for electoral or personal imperatives to take a stand on conscience issues that ordinarily they’d rationalise on the basis of consolidated party positions. That impulse won’t end with an abandoned spill.

Read more: After 119 years, NSW is set to decriminalise abortion. Why has reform taken so long?

As if these unresolved fissures weren’t troubling enough for Berejiklian, she also faces a near stalemate in the upper house. Her chief Legislative Council negotiator, moderate Don Harwin, has proven abysmal at delivering legislation through an increasingly fraught chamber that features an emboldened Mark Latham, Shooters, Fishers and Farmers Party and assorted crossbenchers, all intent on clipping their respective tickets to the premier’s legislative agenda.

One of the state’s most effective premiers in terms of economic fundamentals finds herself in an unusually perilous position. The spill may be off, but her leadership is anything but certain.

Gambling on low-profile support, instead of high-profile stewardship, of the abortion bill looks to have been a miscalculation.

But it is hard to see how any position on this issue would consolidate her leadership at this time and in this emerging political climate.