If you have a question you’d like an expert to answer, send it to curiouskids@theconversation.edu.au. How big is the International Space Station? - Isla, aged 7, Killarney, Australia. The International Space Station (ISS) is the biggest human-made thing in space and the third-brightest object in the sky. It’s so big you can see it in the night sky without a telescope or binoculars. It’s 109 metres long and 75 metres wide – about the same size as a soccer field. It weighs 420 tonnes, about the same as 280 cars. The space station has 932 cubic metres of total space, with about two-thirds used for equipment and storage. Only one-third of it is “habitable”, meaning it can be used for humans to live in. All that may sound big for only six astronauts to live in, but it’s actually quite cramped. Read more: Curious Kids: Where does the oxygen come from in the International Space Station, and why don’t they run out of air? Itty bitty living space The bedroom for each astronaut is a small cabin, with a sleeping bag clipped into the cabin wall to stop them floating around when they sleep. The cabin also holds their computer and has room for a few other personal items. There are also science labs where the crew can do research. There are up to 2,400 research investigations going on during an expedition so the labs can get very crowded. The crew members have to make room for each other and all their equipment. 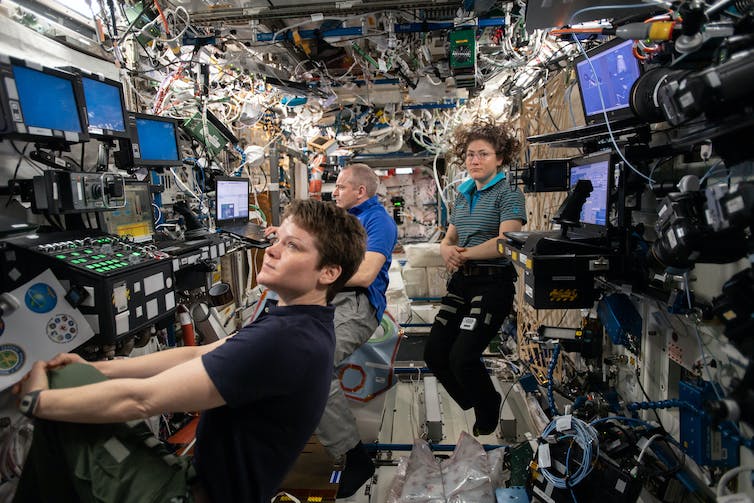 Inside a lab on the ISS. NASA Made in space Did you know it took 42 space flights to assemble the main pieces of the space station? On the outside there are eight solar panels that power the space station. Together, they create up to 90 kilowatts of electricity – enough to power 13 Australian houses! The space station also allows six spaceships to be connected to it at once. These spaceships bring people and supplies from either Russia, Japan or the United States of America. You can read more facts and figures about the ISS here. 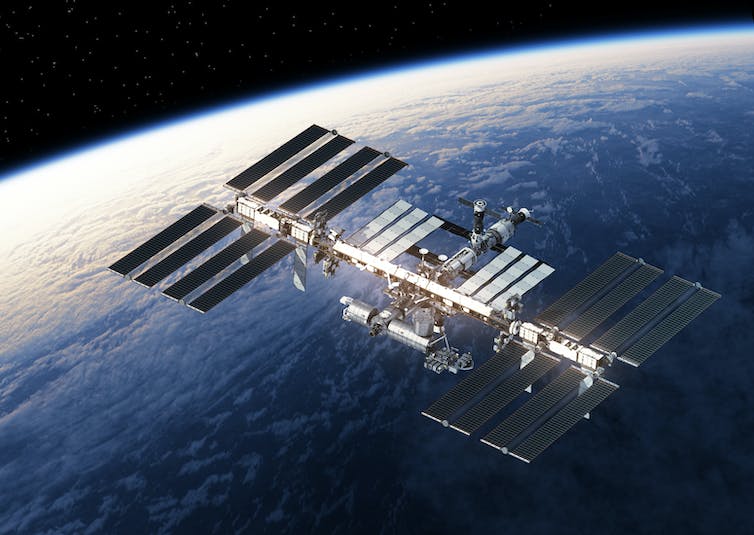 There are currently six crew members on board the International Space Station. www.shuttershock.com, CC BY Watching the Earth The view from inside the space station is spectacular. There is a special viewing window called a cupola. It allows one astronaut at a time to view and take photographs of Earth. The station orbits Earth 16 times every 24 hours. Imagine being able to see 16 sunrises and sunsets every 24 hours. What an amazing sight it would be. Read more: Curious Kids: can people live in space? Hello, curious kids! Have you got a question you’d like an expert to answer? Ask an adult to send your question to curiouskids@theconversation.edu.au Please tell us your name, age and which city you live in. We won’t be able to answer every question but we will do our best.