Jonathan Van Ness, the high-profile star of Queer Eye, has revealed he is living with HIV, having been diagnosed seven years ago at the age of 25.

Media headlines have described the outpouring of support received by Van Ness since coming out as HIV positive to be indicative of changing social attitudes toward HIV.

However, understanding and acceptance of people living with HIV is far from assured.

Van Ness is among the most famous queer and gender non-binary people in the world. Yet he found revealing his HIV status presented a level of fear and risk above coming out as queer.

“I’ve had nightmares every night for the past three months because I’m scared to be this vulnerable with people,” he told the New York Times about the release of his memoir, Over the Top.

HIV-related stigma has always been entangled with homophobia and social fears about immorality and deviance. Growing acceptance of the LGBTI community has muted some of the moral panic about HIV, but most people know very little about what it means to be living with HIV in 2019.

Since the mid-1990s, improved antiretroviral treatment (ART) has enabled HIV be managed as a chronic condition, and often people with HIV can assume normal life expectancy. ART can also suppress HIV in a person’s body, which means it cannot be transmitted to a sexual partner — colloquially known as U=U (undetectable = untransmissible).

Despite this, HIV is still marred by high levels of stigma and misunderstanding which make it incredibly challenging for people to “come out” as HIV positive.

For many Australian adults, the darkly disturbing imagery of the 1987 Grim Reaper media campaign still stands as the dominant cultural image of HIV. The Grim Reaper fuelled a sense of panic with the message that HIV “could kill more Australians than World War Two” and firmly grounded HIV stigma in public sentiment.

At this time, one of the most visible Australian faces of HIV was that of Eve van Grafhorst, a child from NSW whose family was forced into hiding due to harassment they received when Eve was outed as HIV positive in 1985.

In 1990, Time Magazine published the now infamous image of David Kirby dying from AIDS, lying semi-conscious on his bed surrounded by his grieving family. Similar images of deathly thin, young gay men were the prevailing cultural stereotype of HIV at the time, but they in no way told the whole story.

Since the early 1980s, many thousands of activists have publicly disclosed their HIV status in an act of resistance to discriminatory images of people living with HIV and to provide leadership in the fight against HIV and AIDS. 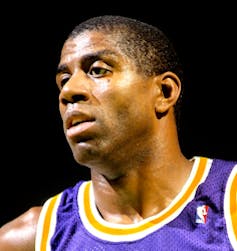 In 1991, LA Lakers star point guard Magic Johnson publicly revealed his HIV status. As a heterosexual sporting hero, Johnson’s coming out disrupted some of the homophobic narrative around HIV, but he also had to confront a shocked public and ongoing media revelations about his sexual history.

This narrative has remained sadly consistent. In 2015, Charlie Sheen announced that he was HIV positive in an effort to stop threats to “out” him. At this point, Sheen had already spent upwards of US$10 million on extortion payments.

Media reporting on Sheen’s HIV status commented on his sexual morality and demeaned the character of sex workers he had engaged.

While the mainstream media around Van Ness has been celebratory of his willingness to share his story so openly, this does not necessarily mean it will be easier for others to reveal their status.

Last week, the results of an Australian national survey of people living with HIV run by La Trobe University, the HIV Futures 9 study, were released, revealing the extent to which HIV stigma can lead to invisibility and isolation.

One in three respondents indicated that almost no-one in their life was aware of their HIV status. A similar number reported that they knew no other people living with HIV with whom they could speak about their experiences.

The survey findings also showed HIV status had a significant impact on the way people approached relationships with friends, family and potential partners: nearly half the heterosexual women surveyed indicated they had avoided intimate relationships or sex since their HIV diagnosis.

Read more: HIV in Australia: we've come a long way but there's more to do

Coming out to build community

Van Ness came out about his HIV status by describing himself as a “member of the beautiful HIV positive community.” 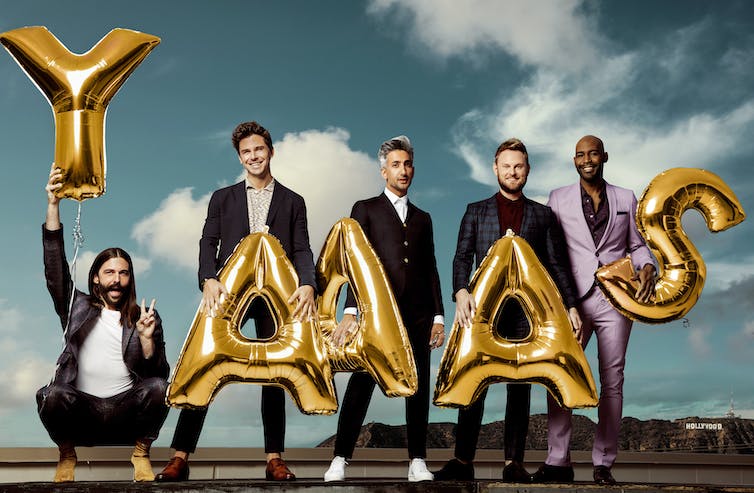 Community has always been important in the queer community – the HIV community is no different. Austin Hargrave/Netflix

The sense of support and solidarity that comes with community is an important buffer against the negative impact of stigma and discrimination. For this reason, adequately funded peer programs and community organisations that connect HIV positive people with each other remain a vital part of the social response to HIV.

These programs rely on the willingness of people living with HIV to be open about their status – despite the risks – as a means to offer advocacy and care for others.

Public support for Van Ness has been powerful, and Van Ness’ fame provides a platform from which he can extend this legacy of building community around HIV. But it should not mask the reality that many people living with HIV continue to be silenced and isolated by stigma.

For that to change, we need to build much greater awareness about the contemporary experience of living with HIV.