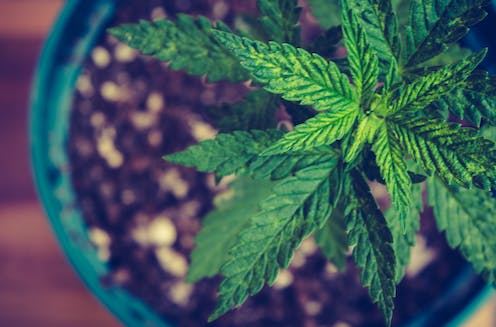 The Australian Capital Territory took the next step towards regulation of the illicit drug market yesterday with new legislation passing through parliament.

The legislation, which won’t come into effect until January 31, 2020, allows cultivation and possession of small amounts of cannabis for personal use for anyone over 18 years.

However, the sale or supply of cannabis is still a criminal offence.

Read more: Legal highs: arguments for and against legalising cannabis in Australia

The ACT has historically been one of the more liberal jurisdictions when it comes to cannabis.

The territory removed criminal penalties for possessing small quantities of cannabis in 1992 and broadened this in 2013. Currently, anyone found in possession of less than 50g of dried cannabis receives a “simple cannabis offence notice”, essentially a fine.

What changes next year?

The new legislation allows adults to grow cannabis plants at home, with limits of two plants per person and four per household, or to possess 50g of dried cannabis.

Cannabis plants can only be cultivated in parts of someone’s home not generally accessible by the public, and only by people who usually live there.

There is a 150g limit for fresh (or “wet”) cannabis to account for cannabis that has been harvested but not yet dried.

The law allows adults to possess cannabis within these limits without the need for a cannabis offence notice to be issued.

What safeguards are in place?

The legislation states cannabis must be kept securely when not in someone’s possession to restrict access by children and young people. Smoking cannabis near children is also an offence.

To protect the interests of children and young people, the simple cannabis offence notice still applies for people under 18. This puts it in line with the way possession of tobacco and alcohol by people under the age of 18 is dealt with.

There are still questions about how this law interacts with stricter Commonwealth laws governing banned drugs, with some MPs warning about possible conflicts.

How does this compare with similar regulation overseas?

Cannabis regulation comes in many forms internationally. The most common model allows the legal sale or supply of cannabis to adults, with further allowances for home grown plants.

The ACT’s allowance of four plants per household is on par with what other jurisdictions allow internationally. However, the ACT’s allowable weight of possessed cannabis is on the lower scale.

Some jurisdictions in Europe allow “cannabis social clubs”, which are a version of a “home grown” model. These are not-for-profit collectives where cannabis is grown and used. Cannabis is not sold. The clubs are only open to members, who own their own plants, and limits to the number of plants per person apply.

What will the changes achieve?

Most Australians support the removal of criminal penalties associated with cannabis use and possession, and a sizeable proportion support legislation.

How will it affect people’s interactions with health services?

Criminalisation of use and possession of drugs reinforces the stigmatisation of people who use them, a major barrier to accessing health services.

The further we move away from the war on drugs, the more illicit drug use becomes a health and human rights issue, potentially reducing stigma.

This law is unlikely to have a big impact on the health system. Most people who use cannabis do so irregularly and acute harms (such as overdoses or severe reactions) are rare.

Read more: Men and women use cannabis for different reasons

Based on international evidence, full regulation does not result in large increases in people using cannabis.

But, with reduced stigma, those who do may be more open to seeking help if their use starts to impact significantly on their day-to-day lives.

Read more: Cannabis and psychosis: what is the link and who is at risk?

Will it affect medical cannabis laws?

Medical cannabis is treated under a completely separate law, in line with other pharmaceutical products. So, the change in recreational cannabis laws do not effect medical cannabis prescribing in the ACT.

However, it is possible that under the new laws people will self-medicate rather than go through medical channels. So they may not have the appropriate medical monitoring of their condition.

Each state and territory determines its own drug laws. Currently there is significant variation in both legal frameworks and implementation of laws in each jurisdiction. So, it is hard to tell whether other jurisdictions will follow.

Some Victorian politicians have been advocating for cannabis legalisation, but this may be some way off. Reason Party leader Fiona Patten has successfully campaigned for a parliamentary inquiry into cannabis to investigate the matter further.