Read more: Arctic breakdown: what climate change in the far north means for the rest of us

The research is based on data we gathered during an expedition on a small Norwegian research vessel, the Lance, that was left to drift in the Arctic sea ice for five months in 2015. 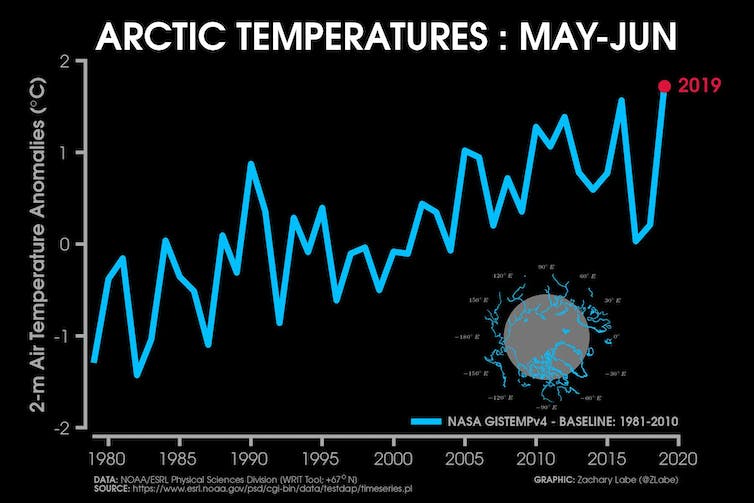 Time series of air temperature anomalies in the Arctic for the period 1981-2010: Temperatures in the Arctic in May and June 2019 period were the warmest in the satellite records. Zack Labe (@ZLabe)

The expedition was intense and felt more like going to the Moon than going on a typical research cruise. What took us by surprise were the many winter storms that battered the ice (and our ship and ice camp).

It has taken us years to collate these data but now we know the winter storms play a key role in the fate of Arctic sea ice, particularly in the Atlantic sector of the Arctic. 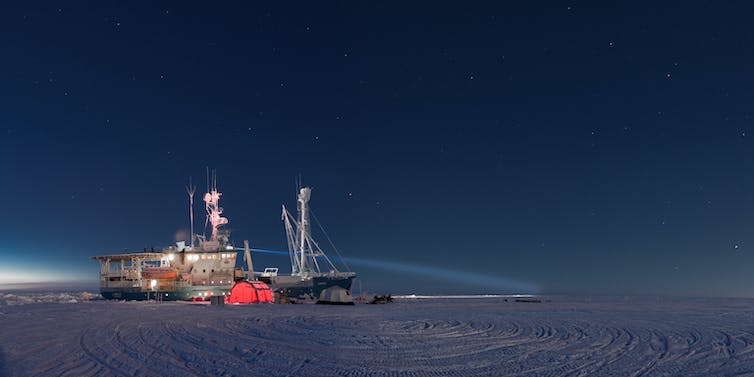 On average, about 10 extreme storms will reach all the way to the North Pole each winter. While these winter storms are short (they last on average 6-48 hours), they can be incredibly intense.

These storms bring heat, moisture and strong winds into the Arctic, and next we look at how they impact sea ice and its surroundings.

Warming and weakening the ice

The strong winds during the storms push the ice around and break it into pieces, making it more fragile and deforming it, more like a boulder field.

The strong winds also stir the ocean below the ice, mixing up warmer water from deeper waters to the surface where it melts the ice from below. This melting of the ice in the middle of winter can happen for several days after the storms when the air is already back to well below freezing. 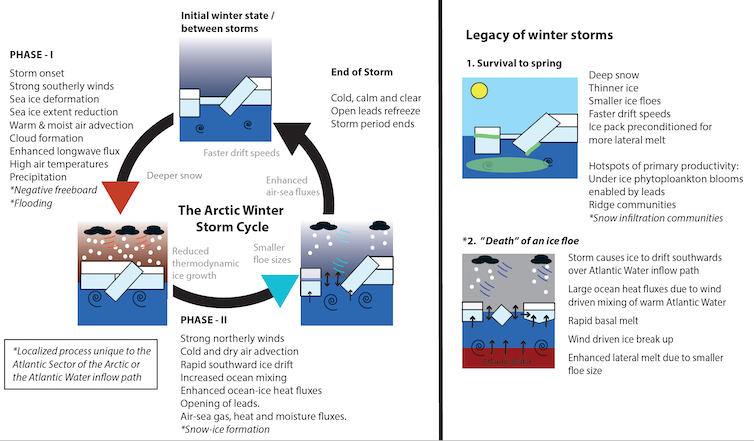 The broken up and deformed ice drifts faster, reaching warmer waters where it melts sooner and faster.

Winter sea ice cover in the Atlantic sector of the Arctic has been retreating at a record breaking pace, especially in the Barents Sea off Norway and Russia. 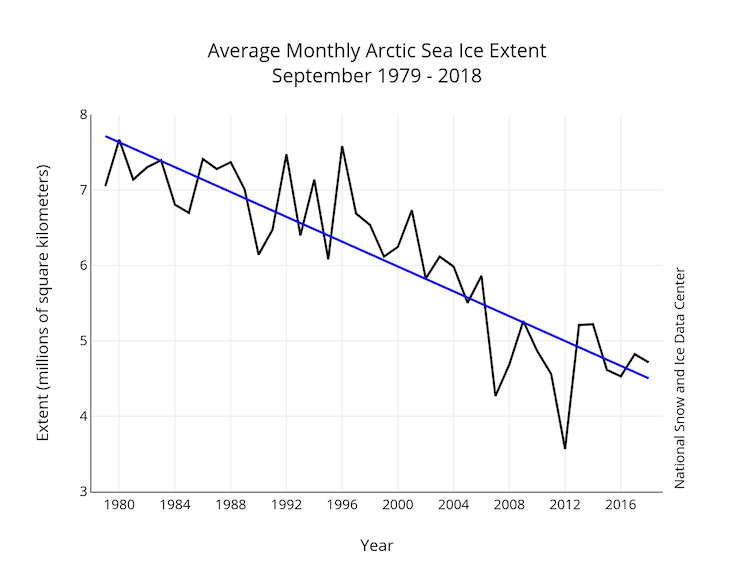 The Arctic is particularly sensitive to human driven climate change. We know the decrease in sea ice is due to both the warming of the Arctic (air and ocean) and changing wind patterns that break up the ice cover.

But there are also amplifying mechanisms or “feedback” mechanisms, in which one natural process reinforces another. Their role in the decrease of sea ice is hard to predict. We now know winter storms in the Arctic contribute to these feedback mechanisms.

Arctic winter storms are increasing in frequency and this is likely due to climate change.

With the thinner Arctic sea ice cover and shallower warmer water in the Arctic Ocean, the mechanisms we observed during the winter storms will likely strengthen and the overall impact of winter storms on Arctic ice is likely to increase in the future.

Two weeks ago, the Arctic sea ice reached its minimum extent for 2019, after another winter of intense winter storms. The minimum ice extent was effectively tied for second lowest since modern record-keeping began in the late 1970s, along with 2007 and 2016, reinforcing the long-term downward trend in Arctic ice extent. Arctic sea ice has been declining for at least 40 years, and amplifying mechanisms such as the winter storms are accelerating this retreat. 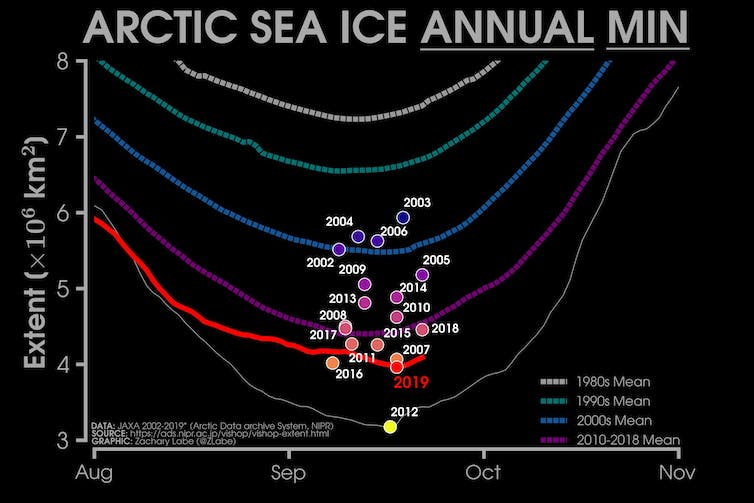 Arctic sea ice extent just reached its annual minimum extent for 2019 on September 18. This season was a tie for the 2nd lowest on record, along with 2007 and 2016 and behind 2012, which holds the overall record minimum. Zack Labe (@ZLabe)

As highlighted in the recent IPCC Ocean and Cryopshere report, these changes in September sea ice are likely unprecedented for at least 1,000 years.

Remember also that changes in the Arctic don’t just affect the immediate region: Arctic warming has been linked to the polar vortex, and weather extremes across central Europe and north America.

As we start taking into account feedback mechanisms like the winter storms, our predictions for the first Arctic sea ice free summer are indicating it will likely happen before 2050.