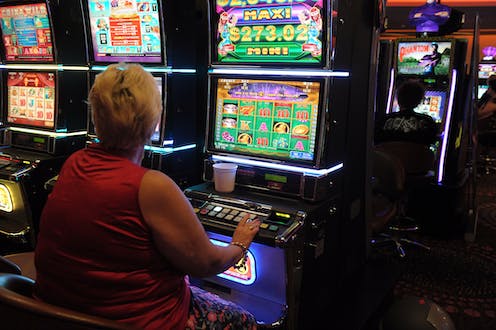 Gambling operators often seek to persuade governments and the public of their virtue by funding “good causes”.

Lotteries, for example, have been used to fund such things as the Sydney Opera House, hospitals in Queensland and health, arts, sport and education initiatives in the UK.

In Australia, and other countries, gambling operators are also required by law to donate some of their revenue for community and charitable purposes. In Victoria, for example, club pokie operators must document their contributions annually. This qualifies them for a reduction in gambling tax.

Our recently published research examined three years of these contributions in the state of Victoria. We sought to determine how much of the money claimed as benefits to the community did, in fact, reach such charitable or philanthropic causes.

What we found was that clubs donated mostly to themselves. Operating expenses accounted for the vast majority of ‘community benfits’. This is permitted under the regulations, but is strongly at odds with the claim that that clubs provide significant support to the community.

What clubs are required to give under the law

These charitable contribution schemes tacitly acknowledge that gambling is a harmful activity. It has significant costs to individuals, families, communities and government.

In Victoria, a study funded by the Victorian Responsible Gambling Foundation estimated the social costs of gambling in the state at $7 billion for 2017. These costs include health impacts, relationship breakdowns and divorce, neglect of children, loss of major assets, bankruptcy, crime and imprisonment, and suicide.

Because of this, it’s important to know whether community contributions from gambling actually offset some or all of this harm.

Read more: The Crown allegations show the repeated failures of our gambling regulators

The Victorian community benefits scheme is unique in its relative transparency. Clubs are required by law to spend at least 8.33% of total pokie losses on community contributions.

These community benefits are defined by a ministerial direction, last amended in 2012. This allows clubs to claim philanthropic, charitable, or benevolent contributions, as well as operating expenses.

If this target is met and documented, clubs enjoy an 8.33% tax break compared to hotel operators. The law requires clubs to provide an annual statement of contributions and these reports are published online.

We used these records, published by the Victorian Commission for Gambling and Liquor Regulation, as the basis for our research.

From this amount, they claimed $853 million (32.5%) as benefits provided to the community.

Our research sought to determine the actual extent to which claimed benefits were, in fact, provided to charitable or philanthropic purposes. Considerable media attention (and some previous research) has suggested that such benefits may be largely illusory.

We found that contributions to charitable or philanthropic purposes amounted to just $38.7 million, or 1.5% of total net gambling revenue. This is obviously far less than the mandated 8.33%.

Read more: The odds you’ll gamble on the Grand Final are high when punting is woven into our very social fabric

In contrast, venue operating costs amounted to $602.5 million, 70.7% of all community benefit claims. This included wages and on-costs, capital costs, outfitting and update of club equipment, insurance and utilities.

This is indeed permitted under the ministerial direction. But when these operating costs are taken into account, the clubs are falling well short of their claims of contributing substantially to the philanthropic or charitable needs of their communities.

In a statement in response to our research, Community Clubs Victoria refuted suggestions

there is such little community benefit to club members and the local communities from the revenues derived from clubs with gaming.

The group said the gaming machines allow it to pay for, among other things, maintenance of sporting fields, team jumpers for junior sporting members, opportunities for volunteers and sporting competitions.

Golf clubs spent 96% ($109 million) of their supposed community contributions on business operating costs. Direct contributions to the community in the form of donations to charities and other community-based organisation, for example, amounted to just $1.6 million, or 0.75% of net gambling revenue.

Although Victorian clubs did not give the required 8.33% of total pokie losses on what might reasonably be regarded as actual community contributions, they did claim the 8.33% tax break offered by the state.

This meant the clubs received a tax discount of $217.4 million over the three-year period. Note that clubs, as mutual organisations, do not generally pay corporations tax. This is despite many operating as highly profitable businesses.

Similar disparities in other states

Our research is backed up by the Productivity Commission, which was scathing of the community benefit schemes operating in most Australian states:

The (gross) value of social contributions by clubs is likely to be significantly less than the support governments provide to clubs through tax and other concessions.

Given this, there are strong grounds for the phased implementation of significantly lower levels of gaming revenue tax concessions for clubs, commensurate with the realised community benefits.

Indeed, this is not just a problem of the Victorian system. The ACT auditor-general raised similar concerns in a 2018 review of the charitable giving regulations there.

Read more: Australia has a long way to go on responsible gambling

The Victorian community contributions scheme allows for scrutiny of charitable giving to a much greater extent than other states.

It may be that pokie operators do support worthy causes. However, in the absence of readily available and transparent data, we don’t know.

Data about how much benefit clubs provide to the community are not presented transparently. They do not accord with a straightforward understanding of what constitutes community benefit.

Because of this, an accurate assessment of the costs and benefits to the community of the gambling industry is close to impossible. What is certain, however, is that the amounts actually contributed to good causes by gambling operators are a tiny fraction of the money lost by people using pokies. They are also a miniscule proportion of the best available estimate of social harms.

If we persist with the idea that gambling can support community causes, we need community benefit systems that demonstrably deliver such benefits. Instead, we have what appears to be a smokescreen.

Behind this, industry claims to support communities, while redirecting most of the money back to themselves. Governments receive significant tax revenue from gambling. They need to make sure that they are not justifying their dependence on harmful products with such schemes.

A transparent scheme that defines community benefits clearly, and in line with reasonable community expectations, is long overdue.