It’s 1963. Frances “Baby” Houseman (Jennifer Grey) is a college-bound teenager staying at Kellerman’s Mountain Lodge with her family. Johnny Castle (Patrick Swayze) is a dance instructor at the resort – and Baby’s love interest.

Dirty Dancing is one of those films almost everyone has at least some knowledge of, even if only second-hand. It is therefore not surprising it has inspired a reality TV show: The Real Dirty Dancing.

It is a predictable, bland and heteronormative reality TV show, with low stakes and little to say about the film beyond “how romantic” it is.

But the 1987 film has a lot to say about Jewish identity, class stratification, shifting gender expectations, and the importance of access to legal and safe abortions.

The reality show emphasises authenticity through locations, costumes and choreography – but by isolating the musical numbers, the film’s complex politics are erased.

You don’t own me

The premise of the film – “dirty” dancing – is unavoidably tied to black culture and the history of “race music.”

In the early 20th century, music by black artists was specifically marketed towards African-American audiences with its own record companies, radio stations and music stores.

This changed as white fans starting listening to African-American music in the 1950s and 1960s.

In the first iconic dirty dancing party scene, Baby is shocked to see the Kellerman’s staff grinding and twisting against each other.

We watch interracial couples dancing and grinding in a scene set four years before Loving v. Virginia made interracial marriage legal in 1967.

Two songs by African American artists play: The Countour’s Do You Love Me (1962) and Otis Redding’s Love Man (1969). These songs were hits on the R&B charts in the 1960s, but neither made the Billboard year-end Hot 100 list.

Part of a cluster of Hollywood dance-based teen-films, Dirty Dancing featured a mix of 1960s pop tunes by big names like The Shirelles and Frankie Valli, as well as original songs – including (I’ve Had) The Time Of My Life.

The soundtrack’s nostalgic pastiche went on to become a huge commercial success, shooting to number one on the charts and becoming one of the best-selling soundtrack albums of all time.

The movie’s musical numbers have become stand-alone properties, famous in their own right. But when these numbers are considered in isolation (as in The Real Dirty Dancing, in wedding videos on YouTube, and in films like Crazy Stupid Love), the original film’s messy class, race and gender politics are sidelined.

Will you love me tomorrow

Much of the film’s plot revolves around an illegal abortion.

Dirty Dancing is set ten years before Roe v. Wade protected a woman’s right to abortion in America. When Johnny’s dance partner Penny needs an abortion, Baby loans the money to pay for the procedure and steps in to learn the routine to ensure the dancers’ employment the following summer.

But when Baby asks her father, a doctor, to help Penny after the botched abortion, he bans her from seeing “those people.”

The film makes explicit the class distinction between those who holiday at Kellerman’s and those who work there: the romance centres on overcoming class differences. But there is also the added barrier of culture, as Baby is Jewish-American and Johnny is of Irish heritage.

Baby and her sister Lisa represent two different models of Jewish-American femininity prized in the 1980s. Baby is going to, in her father’s words, “change the world,” while her sister is going “to decorate it.” Baby is socially conscious and book-smart, while Lisa is a Jewish American Princess. 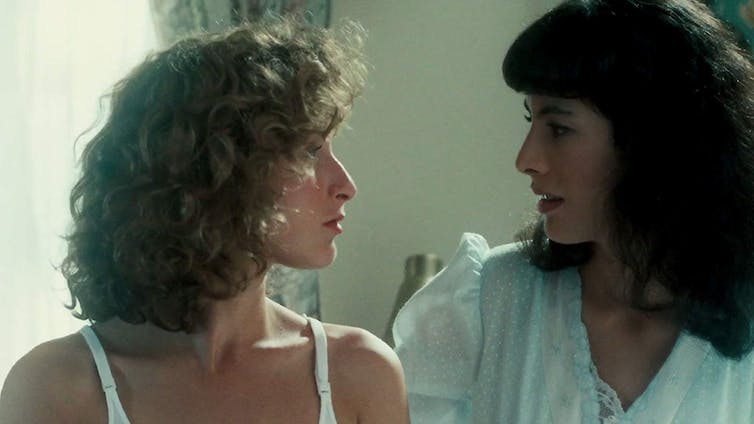 The Real Dirty Dancing elides the gender and racial issues by focusing simply on learning the intimate dance moves.

As Jessica Rowe says in the second episode, “The scariest thing about Dirty Dancing is the ‘dirty’ dancing.”

Much of The Real Dirty Dancing’s promo material features Jessica Rowe’s struggles with her body image, sexuality, and conflicting feelings about being sexy as a mum. A scene where the female contestants are trying on revealing costumes, is used as an opportunity to highlight the women’s insecurities about their bodies.

In a straight to camera interview, Jessica Rowe breaks down saying, “When you become a mum, you almost feel sometimes like a part of yourself shuts down. That part of you that is just for you.” 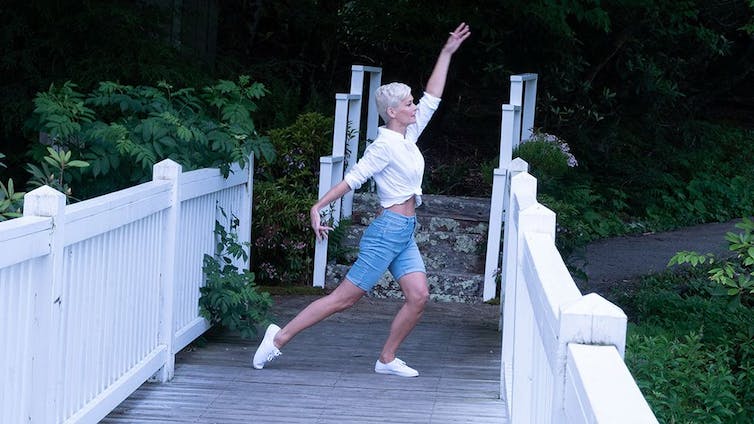 On The Real Dirty Dancing, Jessica Rowe confronts the way her body image shifted after becoming a mother. Seven

It is an interesting and powerful moment that betrays the show’s fluffy low-stakes premise.

We’d like to think the parameters of ideal femininity have shifted since the 1960s when Dirty Dancing was set, or the 1980s when the film was made. As Rowe’s comments reveal, there are still strict rules about how women are expected to best perform motherhood, sexiness and wifedom.

The appeal of reality television is watching ordinary people achieve extraordinary things like a difficult dance lift. By focusing on just the dance moves The Real Dirty Dancing ignores the difficult politics of the film and keeps Baby in the corner.