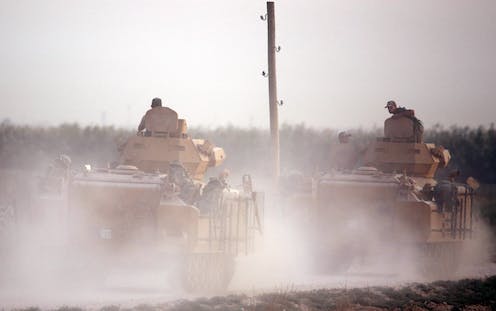 Turkey did not waste much time in launching an attack on Syrian soil just days after US President Donald Trump announced he would withdraw US forces from northern Syria. As this development opens a new chapter in Syria, Turkey maybe unwittingly sinking deeper into that country’s civil war.

This is not the first time president Trump has mentioned withdrawal from Syria – he voiced it in April 2018.

Alleged gas attacks by the Syrian President Bashar al-Assad’s incumbent government followed, which resulted in the US continuing its stay in Syria despite its reluctant president.

The US government has always been tentative with its Syrian policy, which was openly exploited by Russia in its bid to support the Assad government’s grip on power in the embattled country.

It is also not the first time Turkey has talked about a military presence in Syria. In January 2018, it sent troops to north-western Syria, establishing its control over lands to the west of the Euphrates river. Turkey has increased its military build up on the Syrian border ever since.

The US contained any further Turkish advances by making it clear Turkey was not welcome to the east of the river, especially when the US needed the support of Kurdish forces in ending Islamic States’s presence in Syria.

Why does Turkey want to increase its military presence in Syria?

There are three main reasons Turkish President Recep Tayyip Erdogan is eager to send more troops in to northern Syria east of the Euphrates river.

The first is the prospect of free Kurdish states near its borders inspiring the sizeable Kurdish populations in the south east of Turkey to seek similar aspirations. Northern Iraq is slowly moving towards independence. If Kurds in northern Syria were to establish an autonomous region, it would only be a matter of time before the same demands were raised in Turkey.

Fearing this development, Erdogan has pursued an increasingly tough policy on Kurdish political activities in Turkey. The leader of pro-Kurdish party HDP, Selahattin Demirtas, has been in jail for almost three years.

Turkey’s second concern is the reported 3.5 million Syrian refugees living in Turkey since the conflict began in 2011. Although they were initially welcomed with open arms, there is growing discontent in the Turkish media and society, with many calling for their return.

Opposition parties have been critical of the Erdogan government’s inability to effectively manage the refugee crisis, which was one of the key issues that led to Erdogan’s loss in this year’s Istanbul elections.

Erdogan plans to create a safe zone in Northern Syria, establish new settlements within this region and slowly move Arab Syrian refugees back to Syria. This will change the demographics of the region and undermine Kurdish dominance.

Erdogan’s third aim is to make a political investment for future elections. This may be the most important reason, as Erdogan first mentioned a military offensive in Syria soon after his local government election loss in June 2019.

The Turkish leader needs the coalition with MHP, the nationalist party, to maintain his grip on power and enhance his chance of re-election. He needs a war to unify his electorate, please his coalition partner and silence the growing critical voices in the midst of a worsening Turkish economy.

Erdogan made strong hints in August he would send troops to northern Syria against the US-allied YPG, which Turkey considers to be a terrorist group. He was most likely testing international, especially US, reaction. The US responded by offering a joint operation in the region.

It appears Erdogan thought the US involvement was limiting his goals and wasting his time. Perhaps he reasoned the timing was right to make a bold move when Trump was politically weakened by an impeachment inquiry.

It seems Erdogan’s strategy worked. Trump agreed to withdraw from Syria on the condition Turkey took responsibility for handling thousands of IS prisoners and their families in camps.

Trump added a threat to “totally destroy and obliterate the Economy of Turkey” if it was to do anything considered “off-limits”. But the move was still a green light for Turkey to send troops to Syria.

What is likely to happen now?

Trump’s announcement does not mean the US is pulling out of Syria completely. It’s likely the US will continue to have a presence in eastern Syria to watch developments closely and intervene if the situation deteriorates.

A total pull-out would further weaken Trump. He would not want to risk the already-waning Republican party’s support over concerns about a resurgence of IS in Syria.

Russia seems to be pleased with the developments. Putin knows the US withdrawal means greater Russian influence and shores up the Assad government. Since Erdogan does everything with full Russian endorsement, their close collaboration gives Russia leverage in its political and diplomatic struggle with the NATO.

One possibility is that Turkish forces do not face much resistance. They would then only advance to a limited region, with their stated aim of establishing a safe zone and returning Syrian refugees back to Syria. This may contain the situation without further escalation.

Another possibility is that the US abandoning its protection of the Kurdish YPG forces in northern Syria will have a cascading effects. A sizeable portion of Kurdish civilians may be displaced, and some may flee in advance, fearing the worst.

The Kurdish YPG forces may initially avoid open conflict with the advancing Turkish forces, and look for new alliances in Syria. The most likely candidate for this is Assad, who may see an opportunity to bring the Kurdish populations and regions under his control.

If an Assad-Kurdish partnership eventuates, Turkish forces may be drawn into the war within Syria.

Kurdish populations in Turkey may then become involved, threatening Turkey with what it fears the most – a Kurdish insurrection within its own borders.