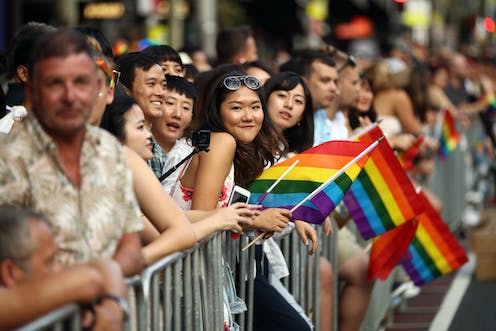 But there are some things we should count, and gender and sexual diversity are among them.

The Australian Bureau of Statistics has abandoned preparations to ask questions about sexual orientation and more detailed questions about gender identity during its upcoming census test later this month.

This follows a consultation process in which many public submissions from researchers, advocacy and community groups and individuals strongly pushed for the bureau to include more detailed questions about gender identity and sexual orientation.

Read more: Mum, dad and two kids no longer the norm in the changing Australian family

The forthcoming census test will, however, ask respondents whether they identify as male, female or non-binary. This does not mean this question will eventually make it onto the questionnaire for census night in 2021. It also does not mean questions about sexual orientation or more detailed questions about gender identity will be excluded.

So there is still time to consider the inclusion of questions that will better reflect Australia’s diverse demography.

Why including gender and sexuality matters

Simply and perhaps most importantly, including questions in the census that adequately capture gender and sexual diversity is an important act of recognition of LGBTIQ people and their lives. Those who do not identify as male or female or heterosexual often feel invisible to the wider community.

The 2016 census tried to be more inclusive by making changes to the way it collected information about sex. This allowed respondents to select “other”, with the option of providing more detail. But in order to answer “other”, respondents needed to request this option. The rationale was that there was some apprehension about how the public would respond to an “other” category.

There were 1,260 people gave a valid response to this question. The ABS acknowledges this figure under-reports the actual numbers of people in Australia who do not identify as male or female.

But “other” is not very inclusive and compounds feelings of invisibility. An individual submission to the Review of the 2021 Census Topics noted:

I am a trans-woman and the last census effectively rendered me invisible along with the rest of my community by making a non-binary gender response difficult to enter.

While the test for the 2021 census will include a response category for non-binary, which is a significant improvement on many fronts, the lack of questions or response categories that recognise respondents who are intersex, transgender or gender-queer and so on means these groups are not counted. This in turn means they remain invisible from a census perspective.

Other countries are counting these populations

Other countries are moving towards including questions about gender identity and sexual orientation in their censuses. The UK, for example, has recently passed a bill allowing trans people to choose their gender in the 2021 census.

Closer to home, researchers are doing their best to capture this information themselves. For example, the Scrolling Beyond Binaries project, which seeks to understand how young (aged 16-35) LGBTIQ+ people in Australia use digital social media, asked respondents about their gender identity, the gender assigned at birth, sexual orientation and their intersex status.

But research such as this is limited in its ability to make population-level findings about LGBTIQ+ people because it’s unable to derive a representative sample. Only the census could collect these data in a reliable way.

Why the numbers count

The ABS already collects some data on these populations. The 2014 General Social Survey captured some information about sexual orientation, but not about gender diversity. Some information about same-sex couples can be derived from the census using data about relationships within households.

Read more: Six months after marriage equality there's much to celebrate – and still much to do

But our picture of same-sex families is incomplete because the census can only tell us about families that live together in the same household. We do not know how many gay or lesbian lone-parent households there are because the census does not collect information about sexual orientation. Moreover, not all lesbian and gay people are in relationships and, even if they were, not all of them reside in the same household.

Australians who identify as lesbian or gay have higher rates of depression, anxiety and suicidal ideation than their heterosexual counterparts. Transgender and sexually diverse people fare even worse.

These facts are well documented among state and federal government policies, programs and strategies, but knowing how much of the general population this affects, where these groups reside and the communities they belong to using census data will mean governments can begin to address these issues more adequately.

Census night in 2021 is still a long way off. It is imperative these questions about gender and sexual diversity are included if we are to recognise LGBTIQ Australians and address the issues and challenges that affect them the most.