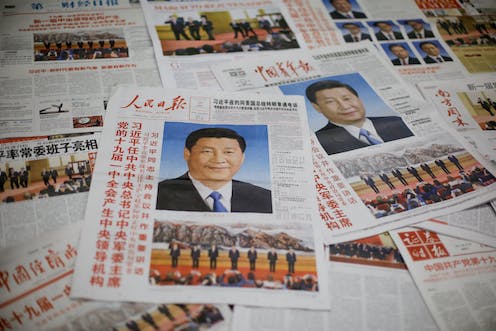 Despite Sam Dastyari resigning this week over ongoing allegations of promoting Chinese interests, and regular denunciations of Chinese interference in Australian politics, little has been said about what China makes of it all.

On Monday, we received the definitive answer: an authoritative condemnation of Australia, signed off at the highest levels.

A brief timeline of Chinese responses shows how the matter escalated.

Last week, the Chinese Embassy in Australia issued an unusually heated statement criticising Australian media and politicians. Some politicians, it said, had made:

irresponsible comments that hurt mutual trust, and that we fully reject.

The statement included a translation of a statement from Prime Minister Malcolm Turnbull that “Chinese influence is interfering with Australian politics”.

The embassy in Canberra clearly reported their displeasure to the foreign ministry in Beijing. Foreign ministry spokesmen at the Beijing press conferences in the following days made similar statements.

The following day, Turnbull said “the Australian people stand up” to China, a phrase he said was inspired by Mao’s 1949 declaration that the Chinese people had stood up.

The matter then escalated. Following the comments being reported, and a meeting in Beijing (almost certainly the next day) to determine the official line, China launched a full rhetorical assault on December 11.

China’s official government spokesperson made a public statement that China:

offer(s) Australia a word of advice: some of these people should stop saying things that hurt Australia’s image and Australia-China mutual trust.

Turnbull’s statement that Australian people “stand up” was the third-leading item on the national news put out by China’s state television broadcaster. Most significantly of all, the People’s Daily, China’s official newspaper of record, had a special signed editorial attacking Australia’s government and media.

Of these events, it is the People’s Daily editorial that is the most authoritative. The People’s Daily is the official newspaper of the Communist Party that runs China. It has a number of different classes of editorial. This one is known as a “signed editorial”: it represents the “voice of China”. It must be signed off on by a member of China’s highest leadership committee, and drafted by a special group within the People’s Daily. It is the third-highest ranking editorial that can be released. The two highest-ranking editorials are only released for special occasions, roughly monthly.

Why is this editorial so important? Because it immediately signals to the entire Chinese political system, including roughly 90 million party members and 40 million public servants, that their top leaders are angry at Australia. Based on the television broadcast and the official editorial, the issues appear to be with Australian media, the public discourse on China, and with the Prime Minister’s phrase that “the Australian people stand up” (which was described as “laughable”).

Next, the many ministries, departments, bureaux, businesses and Communist Party bodies of the massive Chinese state must determine how seriously they take this official displeasure. Chinese leaders rarely release specific orders with targets. Rather, they release exhortations and vague statements for which they then expect the lower level actors to provide specific solutions. So subordinate departments are to prepare and submit a response that is in line with the editorial so that the leaders may look favourably on them.

None of these measures threatens the Australian state, nor our economy. China will not launch a trade war over this. But we need to be clear: “breaching mutual trust”, as the Chinese government describes it, can be lived with as long as the benefits to Australia outweigh the costs. Based on the current official Chinese media, costs are highly probable.

Read more: Ban on foreign political donations is both too broad and too narrow, and won’t fix our system

The last time that Australia received an official editorial condemning its actions was in 2009, when it refused official requests by China not to issue a visa to a dissident filmmaker (at the same time as the arrest of Australian citizen and Rio Tinto employee Stern Hu in China). A pointed editorial, albeit one of lower rank than the one issued on Monday, warned about “Australia’s Choice”.

Australia’s prime minister at that time was expert sinologist Kevin Rudd, who refused to intervene personally in the situation. Rudd was not personally criticised in the editorial. And China eventually sent the head of its government over to make an unusual joint public statement. As this statement would also have needed to be signed off at the highest levels, it sent a new signal to the Chinese system that Australia was out of the dog house.

So until a new line or editorial comes out of Beijing, Australian business and government representatives in China can probably expect some rather heavy-going. Recent events are likely to be raised in many meetings. It very likely will also retard the progress of the next stage of the Australia-China free trade agreement. Finally, there is likely to be a reduction in the number of Chinese students allowed to study in Australia - the editorial argued that these students had been “significantly wounded”.

There are some other factors that may reduce costs. This is the best time to incur the wrath of the Chinese government. Due to the delay between choosing new national Party leaders and then assigning them to their various government ministries (which occurs in March), government agencies tend to be less reactive to official media signals than usual.