CC BY-NC-ND The aftermath has seen retaliation from multiple layers of China’s political and corporate power structure. The furious response has sent a multibillion-dollar sports empire into crisis mode, with NBA officials running scared about losing revenue from the league’s most important foreign market. The Chinese reaction tells a lot about China’s sensitivities. It’s also a lesson in the “realpolitik” the regime has learnt from its successful track record in bullying global sporting organisations to see things its way. Read more: 'We fear Hong Kong will become just another Chinese city': an interview with Martin Lee, grandfather of democracy But it might also yet prove to be a lesson in overreach for an emerging superpower still coming to terms with its new economic muscle and the extent to which it can throw its weight around – particular in an arena that is still America’s game. Chinese backlash Following Morey’s tweet, the Chinese Consulate in Houston lodged an official complaint. The Chinese Basketball Association suspended dealings with the Rockets. China’s state broadcaster, China Central Television, and digital network Tencent (which has the digital streaming rights for NBA in China) suspended broadcasting NBA pre-season games. All of the NBA’s official Chinese partners have suspended ties with the league. All this despite statements from the Rockets’ owner and the NBA distancing themselves from Morey’s tweet (NBA commissioner Adam Silver called the tweet “regrettable”), with Morey himself also deleting the tweet and issuing a grovelling apology. The Chinese government’s power over the NBA also explains its desire to send a message that no one repeat Morey’s “erroneous comments”. Basketball, and the NBA in particular, are hugely popular in China – with the Houston Rockets one of the most popular teams in the country. The head of the Chinese Basketball Association, basketball legend Yao Ming, is a former Rockets player. In recognition of the team’s Chinese supporter base, the Rockets occasionally play in Chinese-inspired uniforms. 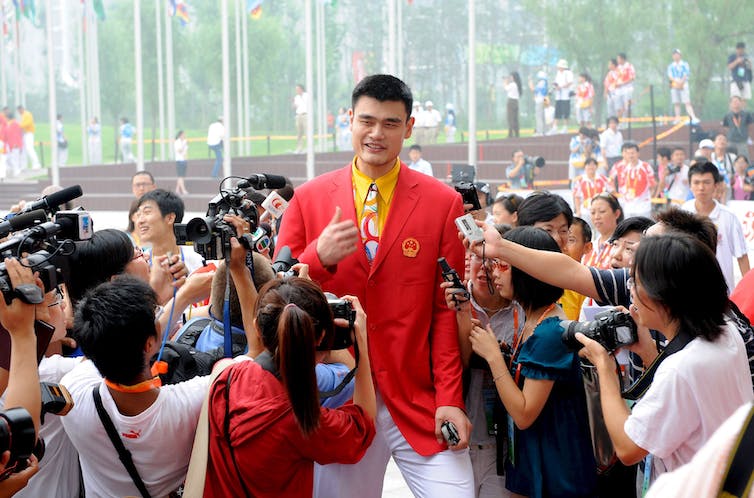 Chinese NBA basketball star Yao Ming during the opening of the Olympic Village in Beijing in 2008. Gero Breloer/EPA China is the NBA’s major growth market. The broadcast deal with Tencent alone is worth a reported US$1.5 billion (about A$2.2 billion) a year. NBA teams are now reportedly planning for the possibility that lost revenues from China will see the NBA reduce team salary caps by 10% to 15% – or up to about US$17 million a team. Read more: China's financial muscle makes its mark on the global sport industry A sports-conscious regime The Chinese reaction is part of the Chinese Communist Party’s long history of seeing sports in political terms. This goes back to Mao Zedong, who as early as 1917, even before he turned towards Marxism, wanted Chinese youth to become “sports-conscious” to rectify the nation’s fortunes, and to correct the humiliation inflicted on China by Western powers during the 19th century. Since its foundation, the People’s Republic of China in 1949 has used sports to push political objectives. Its efforts to stop Taiwan competing as the “Republic of China” in international sporting events include boycotting the 1956 Melbourne Olympic Games. To appease China, Taiwan must now compete as Chinese Taipei in all international events, under the fiction it is a provisional or provincial body rather than an independent nation. Last year Taiwan accused China of bullying the East Asian Olympic Committee to revoke Taiwan’s permission to host the East Asian Youth Games. Read more: Inside China's vast influence network – how it works, and the extent of its reach in Australia Playing an American game On one score, China has flexed its muscle to get what it wants in this case. The reaction of the NBA and associated companies such as Nike, which pulled Rockets gear from its Chinese stores, shows American companies will kowtow to preserve access to the Chinese market. But Beijing may have misjudged its heavy-handed approach to soft power this time. Arguably it has simply focused attention on the Hong Kong protest movement. In the US, fans are turning up to NBA games with clothing and signs supporting the Hong Kong protests. Efforts by the NBA to discourage this by kicking them out has drawn more media attention. Politicians across the ideological spectrum, from conservative Republican Ted Cruz to Democratic presidential hopeful Elizabeth Warren, have criticised the NBA. The US knows how to play this game. During the long Cold War between the US and the Soviet Union, hockey rinks, swimming pools, running tracks and basketball courts became theatres of proxy confrontation between the two superpowers – between capitalism and communism, freedom and tyranny, democracy and dictatorship. In the face of rising tensions with the United States and China, they who’s they? might become the same. American companies may ideally wish to keep everybody onside, but if it comes to the crunch they’ll go with their biggest market over their second-biggest. China might be part of the NBA’s future, but America is its heartland.