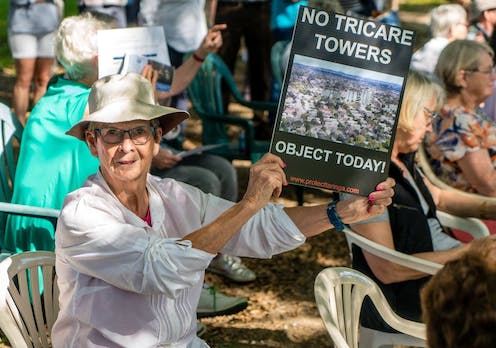 Good planning needs integrity, and public participation should play a role in that.

But a row over a high-rise development proposed for suburban Brisbane shows what happens when the public feels left out of the planning process.

This highlights the problem with what is termed performance-based planning, which allows some controversial applications to be approved with little or no input from the community.

Read more: It's easy to get us walking more if we have somewhere to walk to near our home and work

The site it chose was zoned for community facilities and the application was treated under Brisbane City Council’s performance-based planning rules as “code assessable development”.

Even though the developer was not required to give notice of the proposal to the local community, people soon got wind of it. They mobilised strong opposition to the planned development.

The developer was proposing three buildings of eight, 12 and 16 storeys in a locality characterised by dwellings that are mostly one to three storeys high.

In November 2017, the council rejected the application. The developer appealed.

TriCare then modified the proposal to the council’s satisfaction and the Queensland Planning and Environment Court approved the negotiated deal last month.

The approved design is for three buildings ranging from seven to eight storeys, a very significant scaling down of the original proposal.

But once again the local community was not involved in any of the negotiations or the court proceedings. This is because no community appeals are allowed on code assessable development.

Would the developer have got what it originally wanted if the community had not shown its opposition? And why didn’t the court even consider the community’s point of view?

The answer to these questions lies partly in the legal framework for code assessable development.

In Queensland, code assessable development is considered a bounded form of assessment, which means it should be considered primarily against a planning scheme’s codes. The original aim was to speed up approvals for development applications broadly consistent with a council’s planning scheme.

These codes are written in a performance-based way. This means developers that only meet the overall outcomes of a code can still get their proposals across the line no matter what the code’s finer details state.

Overall outcomes are very often just that – broad statements of intent open to many different interpretations.

For example, in the TriCare case the applicable overall outcomes required development to be “generally consistent with the character of the area” and to “complement the prevailing, scale, height and bulk of expected development in the locality”.

The council – and the community – believed the initial application did not comply with these terms. The developer’s appeal argued its proposal was “generally consistent” with the character of the area as there were at least some medium-to-high-rise buildings in the area, including one nine-storey residential building on adjacent land.

Contrary to the council’s view, the developer argued:

The proposed development is of a scale, bulk and height that provides a high level of amenity and transitions sensitively to surrounding uses.

Evidently, code assessment is not quite the bounded and uncontroversial form of decision-making the legislators intended.

Planning with the community

In planning, good decision-making needs integrity. It needs to provide decisions the community knows to expect including, where appropriate, conditions that protect and respond to the needs of the community.

Read more: '30-minute city'? Not in my backyard! Smart Cities Plan must let people have their say

Requirements to be “generally consistent with the character of the area” serve no useful purpose if the character of an area is hybrid, or has different meanings for the short- and long-term residents of that area.

Yet whether applications are classed as impact or code assessable is a matter left to the discretion of individual councils with very little input from the community.

Further guidance needs to be given to better match assessment categories with community concerns.

Flexibility and discretion have a role to play in good planning. But if integrity, honesty and public trust are also goals then transparency and public accountability should be increased.

The value of public participation – both in its contribution to better design and for keeping the system accountable and honest – needs to be genuinely recognised and valued.

Not all development applications may warrant public appeal rights but a place at the table for the community somewhere along the line is surely warranted.

The Taringa development was initially assessed under legislation that has been superseded. But, as I warned last year, Queensland’s new Planning Act has done little to nothing to resolve the fundamental concerns this case raises.

The divisive story of the aged-care development in Taringa serves as a timely warning to other states looking to shift to a performance-based planning model.