All women know to expect the time in life when their periods finish and they reach menopause. Many might even look forward to it. What many women don’t know, however, is they will also experience symptoms in the time leading up to menopause. This is known as perimenopause.

On average perimenopause lasts for three to four years, usually starting in the mid to late 40s. Some women may experience it for only a few months, but for others it can be as long as a decade and can start as early as the mid-30s. During perimenopause a woman’s menstrual cycle will become irregular, they may experience lighter or heavier than normal bleeding, and intermittent spotting.

Women who have never given birth, and those with early puberty, or short menstrual cycles are more likely to experience earlier perimenopause.

What’s happening to my hormones?

The ovaries produce the female hormones oestrogen and progesterone, which control menstruation and ovulation (when an egg is released from the ovary).

From a woman’s late-30s, the number of eggs left in the ovaries decreases more quickly. Leading up to menopausal transition, the level of oestrogen changes, dropping rapidly around two years prior to menopause and stabilising around two years afterwards.

Progesterone also decreases towards menopause as it is produced only if an egg is released. Lack of progesterone can result in irregular, heavier, and prolonged menstrual periods during perimenopause.

Women can experience a range of symptoms during perimenopause including:

In the last one to two years of perimenopause, women are more likely to complain of low-oestrogen-associated symptoms, in particular vasomotor symptoms (hot flushes and night sweats) and vaginal dryness.

Some groups of women are also more likely to experience menopausal symptoms, including those who are: overweight or obese, smokers, of low socioeconomic status, and those with anxiety, depressive symptoms, or who feel stressed.

A recent US study found the menopausal transition is accompanied by accelerated gains in fat mass and simultaneous losses in lean mass, and these changes in body composition continue until two years after menopause. It was found weight gain began in premenopause and increased steadily during perimenopause (around 0.4 kg per year).

A lack of exercise, unhealthy eating, lower levels of education, insufficient sleep, the number of births a woman has had, and a family history of obesity may substantially contribute to weight gain in midlife. 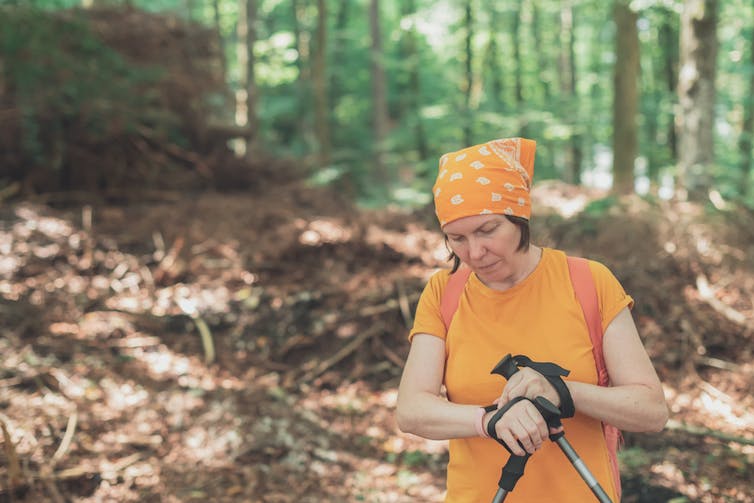 Menopause causes weight gain, and extra weight worsens the symptoms of menopause. So maintaining a healthy diet and exercise regimen in midlife is important for women. from www.shutterstock.com

For women who seek medical advice for their symptoms, menopausal hormone therapy (MHT, also known as hormone replacement therapy) is the most commonly prescribed treatment. Hormone therapy can help to relieve symptoms by replacing oestrogen levels that fall naturally during perimenopause.

GPs should discuss the short-term (up to five years) and long-term benefits and risks, before women decide to use hormone therapy, according to the college of obstetricians and gynaecologists.

If hormone therapy is not suitable, there are other non-hormonal treatments that can be discussed with the GP. This includes changing lifestyle factors such as improvements in diet, regular physical activity, optimal weight management, and quitting smoking.

Perimenopause in the workplace

For some women, menopausal symptoms such as vasomotor symptoms and fatigue can impact their performance at work. The Australasian Menopause Society recommends the following improvements to working conditions for women going through menopause which are based on the guidelines produced by the European Menopause and Andropause Society:

Read more: How to make work menopause-friendly: don't think of it as a problem to be managed

Women still experience menstrual cycles during perimenopause and can fall pregnant, so contraception remains important. Contraception is required for two years after the last menstrual period in women aged under 50 years and one year in those over 50.

The use of combined hormonal contraceptives (such as pills, patches, or vaginal rings) until the age of 50 is acceptable if women are not at risk of heart disease or thrombosis. Risk factors include smoking, being overweight or obese, or having high blood pressure.

Hormonal contraceptives should not be used alongside hormonal treatments for menopause. Instead barrier methods (condoms or caps) or other methods (spermicides, implant or intrauterine devices).