Teachers have very little to do with why some kids are better at school than others, our research shows. This contradicts the popular view that teachers matter most (after genes) when it comes to academic achievement.

Previous research has suggested teacher quality – which includes their qualification level and ability to organise the class – can account for up to 30% of the reason some students get better marks than others.

But our study of 4,533 twin pairs, published in the Journal of Educational Psychology, found classroom factors – which include teacher quality and class size – accounted for only 2-3% of the differences in students’ NAPLAN scores.

Read more: Genes can have up to 80% influence on students' academic performance

Classroom factors differ from school factors, although they overlap. School factors would include the overall socioeconomic makeup of the school and broader administrative policies.

Because our twin pairs generally attended the same school, we were not able to test for school differences. But we can apply our findings to differences between classrooms.

Most children first learn to read via formal instruction that starts in kindergarten or first grade. But they vary in how well and how quickly they learn across the first and subsequent years of instruction. Similarly, differences in numeracy emerge early in school and continue throughout.

Previous studies show genes account for most of the individual differences – an estimated 40-75% – in numeracy and literacy development among twins at school.

Around 40% of the variability is then left to be explained by environmental factors. These include twins’ shared environments, such as parents’ educational values and socioeconomic status, and factors that affect each twin differently – known as their unique environment – such as if they learn in different classrooms.

Read more: Why some migrant school students do better than their local peers (they're not 'just smarter')

We wanted to find out how much the classroom environment matters to student achievement.

We used twins because they share either all (identical) or half (non-identical) of their genes, and both types of twins share parts of their environment such as their parents, where they live, and often which schools they attend.

There are also parts of the environment twins sometimes don’t share with each other such as their classrooms and friends. We can use what we know to be similar or different about twins to learn about how genes and environments influence achievement for all students, including non-twins. 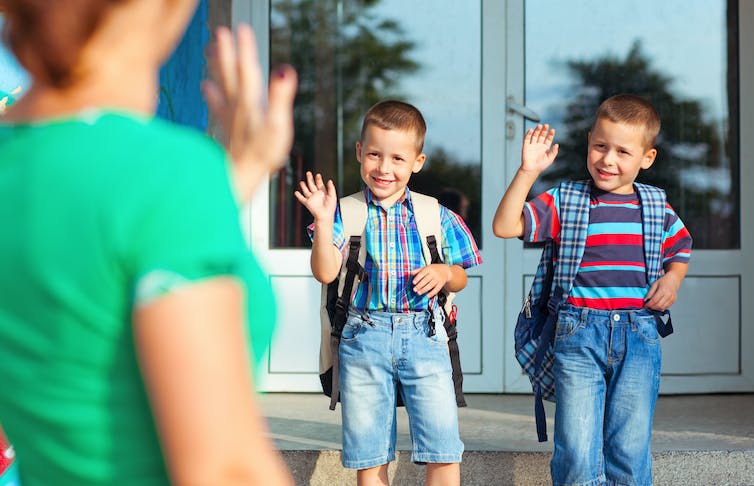 Reasons for some students having higher scores than others may lie outside the classroom. from shutterstock.com

We examined classroom-level influences on twins’ literacy skills in kindergarten through to grade 2, and on literacy and numeracy skills in grades 3, 5, 7 and 9. We did this by comparing the similarity of NAPLAN test scores in twins who shared or did not share classrooms with each other.

We found twins in separate classrooms were almost as similar in achievement as those who were placed together. This was true for all NAPLAN tests – numeracy as well as the literacy components – and as true for high-school grades 7 and 9 as for kindergarten through to grade 5.

Aside from the 2-3% classroom effect, our research (generalised across the sample) established a substantial proportion of the variability among students – on average around 60% – comes down to genetic differences.

Of the remaining 30+%, it appears other environmental factors such as broader school-based influences, or other still undetermined factors, play a larger role than the classroom environment.

The teacher isn’t to blame

Reasons for individual differences in reading and numeracy development have often been attributed to environmental factors.

Education policies in several countries reflect this. In the United States the Every Student Succeeds Act, for instance, assumes variation in teacher quality is a major reason for differences in student success, and that teachers should be held accountable when their students fall behind.

Read more: Why we need to review how we test for teacher quality

We acknowledge teachers matter. It is because of them all children know more at the end of a year, a week, even a day, than they did before.

But our study suggests teachers are doing an even-handed job of educating our students in the core areas of literacy and numeracy. We don’t have data on the higher grades (10-12) where the syllabus gets more demanding and shortages of fully trained teachers in mathematics, say, may begin to show.

But class factors, such as “teacher quality”, don’t appear to be the driving force for why students differ in their NAPLAN scores. Our results suggest individual differences in how students develop may be based more on environmental influences outside the classroom.