Discussion of the environment is embedded in our culture as public awareness over issues such as climate change and plastic pollution has grown. Advertisers are not shy about tapping into this concern for their own benefit.

A Twitter analysis last year revealed that in the UK at least, the environment was a current and growing issue. Between January 2015 and March 2018, discussion on Twitter about single-use plastic, for example, increased by an incredible 5,543%.

Advertisers are already highly skilled at the power of narrative: reducing complexity and helping us make sense of their message. This power is amplified when the narrative taps into culture. A brand message, if successful, then becomes part of people’s conversations rather than interrupting them with ads they don’t care about.

Read more: Here is a global solution to the plastic waste crisis - and A$443 million to get it started

Advertisers who tell a good story can persuade the public of all sorts of things. Some messages are positive and constructive. But a few are disingenuous and misleading.

The latter is especially true in the case of recycling, where advertisers often imply that consumers, not corporations, are responsible for the huge amounts of plastic waste a product creates. 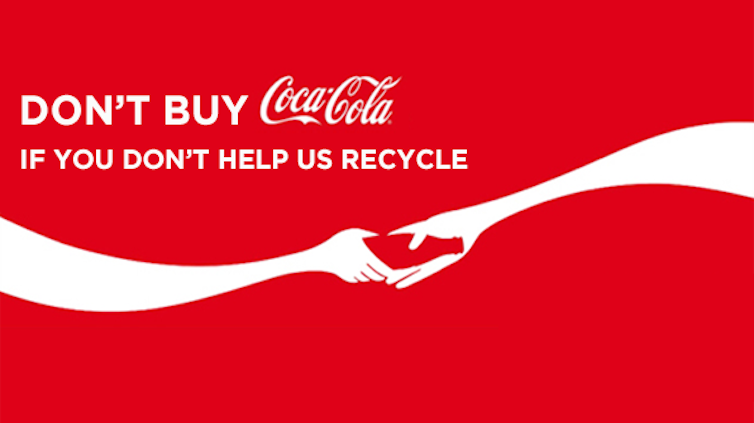 A CocaCola recycling campaign that ran in the 2019 European summer. Supplied by author

Plastic pollution is a big deal

Australia’s National Waste Report last year found 2.5 million tonnes of plastic waste was generated in 2016-17 - or 103kg for each person. Most of it was only used once, and just 12% was recycled.

Coca-Cola says by the end of 2019, 70% of its plastic bottles in Australia will be made entirely from recycled plastic. The company in August released a video in Australia thanking people for recycling.

Read more: We organised a conference for 570 people without using plastic. Here's how it went

It follows a European campaign launched by the company in June with the tagline “Don’t buy Coca-Cola if you’re not going to help us recycle”.

Absolut Vodka this year launched a new limited edition bottle made of 41% recycled glass - like all of its bottles - accompanied by a “Guide to a Circular Living Together”. The company told customers: “Now’s your time to shine on stage - rocking the recycling lifestyle as a true #RecyclingHero!”

Coca-Cola Australia | Thanks For Recycling Campaign, 2019.

On the face of it, such campaigns might seem virtuous, especially following China’s 2018 policy limiting the import of low-quality mixed recyclables. But in fact they continue a long history of framing consumers as the main waste culprits.

The practice began in the US in the 1950s when Keep America Beautiful was formed. The non-profit consortium included Coca-Cola and tobacco manufacturer Phillip Morris, among others. Its campaigns, such as the 1971 “Crying Indian” ad, tapped into a shared cultural guilt for polluting the environment and, in this case, mistreating native people.

Such tactics have been mirrored by Keep Australia Beautiful campaigns.

But guilt is not a good predictor of people’s behaviour. A 2001 study found individuals must feel ethically validated, not guilty, to behave in an environmentally friendly way.

Consumers are not the villains

Manufacturers of consumer products obviously play a major role in the growing plastic problem. This is reflected in the Australian Packaging Covenant, an agreement between government and industry.

It says responsibility for packaging should be shared by companies throughout the supply chain. Consumers, waste service providers, recyclers and governments also have roles to play.

Read more: Indonesia has sent Australia's recycling home – it's time to clean up our act

Researchers have noted that a permissive legal framework has allowed plastic pollution to rise despite the obvious harm it causes to communities and marine life.

…the federal government has been absent from the conversation about waste, while Australians are operating in a culture where ‘we don’t do what we’re not forced to do’.

Plastic waste is on the radar of Australian governments. State and federal environment ministers last year set a target that all packaging be recyclable, compostable or reusable by 2025 or earlier.

But critics say rather than set targets, the federal government must mandate the use of recycled plastic in packaging to ensure the waste problem is addressed. 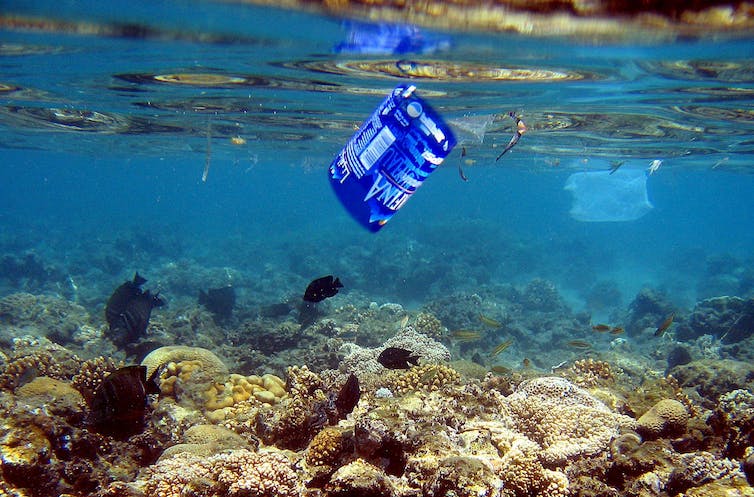 Fish swimming along a coral reef near a water bottle label and a plastic bag off the coast of the Red Sea resort town of Naama Bay, Egypt. Mike Nelson/EPA

Companies such as Coca-Cola are embracing the concept of sustainability to some extent. But better still, other brands have sought to fix recycling systems themselves.

In February Unilever “paid” people in Buenos Aires, Argentina for their household recyclables with discount coupons redeemable against its products at selected retailers.

In the UK, Burger King last month announced it was scrapping plastic toys from kids’ meals and invited the public to bring in old plastic toys from any restaurant meal. The plastic will be remade into “interactive play opportunities” for families at their restaurants.

Consumers do have a role to play in waste reduction, including by recycling or demanding that companies find alternatives to single-use plastics. But if companies want to respond meaningfully to the plastic crisis, they must accept ultimate responsibility for their packaging and work towards zero-waste.