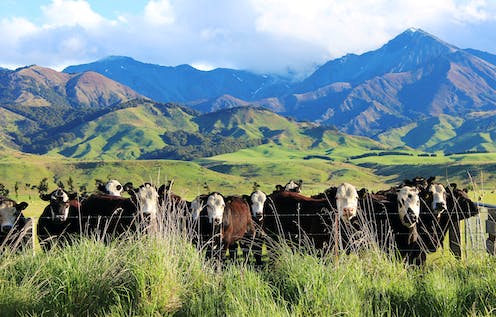 After months of deliberations, New Zealand’s coalition government last week announced a partnership with the farming sector, with a five-year plan to quantify and price farm emissions by 2025.

Agriculture is responsible for half of New Zealand’s greenhouse gas emissions. Earlier this year, the Interim Climate Change Committee (ICCC) recommended that agricultural emissions should be brought under the New Zealand Emissions Trading Scheme as soon as possible. It cautioned against a voluntary collaboration with the sector as this would “result in ongoing policy uncertainty that could weaken investment signals and reduce preparedness by the sector”.

The partnership announcement comes just as a consultation period is closing on proposed changes to water quality legislation. What is missing in the government’s approach is any acknowledgement of the strong links between agricultural emissions to the atmosphere and water.

Under the partnership arrangement, the sector will have five years before having to pay for 5% of its share of emissions. The government built in a backstop of bringing agricultural emissions into the ETS by 2025, or earlier, if there isn’t sufficient progress on curbing emissions.

But reducing farming intensity would have multiple positive outcomes, from freshwater to human health. The New Zealand situation is a microcosm of a failed global agriculture system that is driving biodiversity loss, nitrogen pollution and climate change.

Read more: The battle for the future of farming: what you need to know

New Zealand could be a global showcase for sustainable agriculture. The country is blessed with many natural advantages like nutrient-rich soils, abundant rainfall, low human population and a global perception of clean and healthy ecosystems.

Rather than taking advantage of its natural attributes, New Zealand intensified and industrialised agriculture. It went from a low-input sustainable food production system to one based on fossil-fuel-derived, synthetic nitrogen fertiliser and energy.

New Zealand’s agricultural intensification involved adding more cows per hectare on pasture, rather than in feedlots or by housing animals. While this form of intensification is more visually appealing and perceived as less harmful, it nonetheless comes with its own set of environmental issues.

In the last three decades, sheep numbers have halved, but the number of dairy cattle has more than doubled and milk production trebled. New Zealand is now the world’s eighth-largest dairy producer and biggest dairy exporter. But this production growth was achieved through massive increases in irrigation, fertiliser use, imported animal feed and energy use.

From riches to rags

Ecologists have described the ecological consequences of this land-use intensification as a “riches to rags” transformation. The negative impacts on freshwater biodiversity have been extreme. For example, a world-record three-quarters of native New Zealand fish are listed as threatened with extinction.

Read more: Despite its green image, NZ has world's highest proportion of species at risk

Unsurprisingly, given the increased external inputs, the amount of nitrogen leaching from livestock each year more than doubled in a few decades. These leached nutrients as well as pathogens resulting from intensification had significant negative impacts on rivers, groundwater, lakes and oceans.

Swimming in many rivers in farmed areas now poses a risk to human health from the ingestion of pathogens.

Climate change is another risk to human health. In New Zealand, emissions from agriculture have increased by 13.5% since 1990, predominantly from growth in dairy farming.

Opinion polls show New Zealanders rate freshwater degradation as their most important environmental issue. They have also taken to the streets demanding climate action. The true solutions are simple, inexpensive and have multiple benefits.

In New Zealand, a transformation towards holistic farming approaches, such as regenerative agriculture, agroecology, agro-forestry and climate-smart agriculture, is imperative and should build on indigenous and traditional knowledge.