Amid rising violence and vandalism in ongoing protests, the public’s role in cleaning up a mosque sprayed with blue dye last week by the police proves once again the distinctiveness of Hong Kong civil society. The public response to appeals to help with the clean-up show this is a society that voluntarily protects the Muslim community and cherishes the city’s multifaceted ethnic and religious traditions.

On the 20th weekend of protests, a police water cannon truck firing blue dye at the front gates had damaged the city’s largest mosque. Hong Kong Chief Executive Carrie Lam Cheng Yuet-ngor and Police Commissioner Stephen Lo Wai-chung went to the mosque and apologised in a sign of the sensitivity of the action. They described it as an accident.

But the police defended their use of the water cannon in the name of protecting the mosque from rioters’ vandalism. The blue dye makes it easier for police to identify and arrest protesters.

Immediately after the mosque was sprayed, social media appeals were made to protesters and residents to clean up the front of the blue-stained mosque. The Muslim community was comforted by the many Hong Kong people who volunteered to help. In doing so, they showed they cherish the mosque, defend the rights of Muslims and seek solidarity with the city’s ethnic minorities.

On social media, the Muslim Council in Hong Kong praised the city’s residents.

How did the mosque get caught up in protests?

Since June 9, Hong Kong citizens from all walks for life have been marching in the streets in protest against a Bill of Extradition. Many people fear the Chinese government may use it as a tool to arrest and extradite dissidents from Hong Kong to mainland China for trial.

Though the Hong Kong government formally withdrew the bill last week, the protests are seemingly unstoppable. This is mainly due to protesters’ disappointment at the government’s failure to respond to all of their “five demands”:

The Hong Kong government had condemned escalating vandalism, and before the Kowloon protest it was speculated Kowloon Mosque could be targeted. A few days earlier pro-democracy activist leader Jimmy Sham Tsz-kit had been brutally attacked by a gang that some reports said were of South Asian descent.

Police had banned a planned protest at Kowloon on Sunday, October 20. Thousands of protesters still turned out. As many had anticipated, it turned into another violent conflict between the police and protesters.

Mosque is an iconic landmark

What made this incident markedly different from other demonstrations in the past few months was that it involved Kowloon Mosque. It’s a treasured Islamic architectural icon that has long been hailed as a heritage landmark. The mosque has served the city’s largely South Asian Muslim community – about 4% of Hong Kong’s population – since the colonial era. 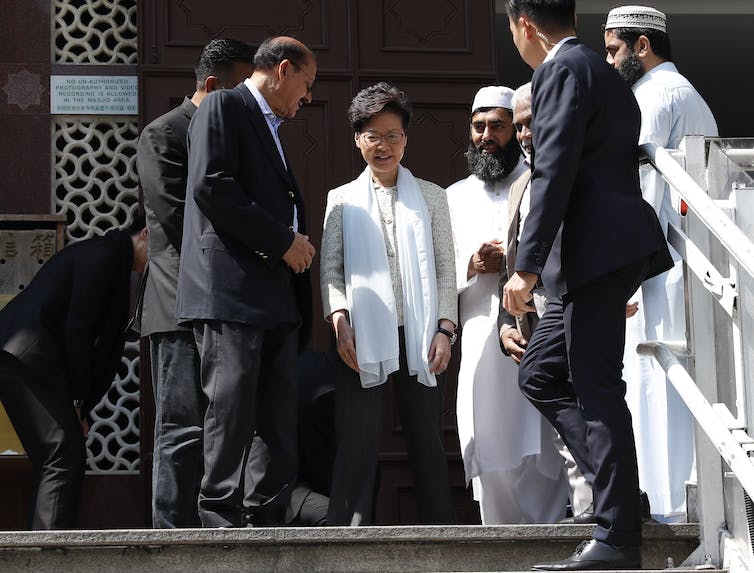 The mosque, the first on Kowloon Peninsula, was built in 1896 for the “Mohammedans of Upper India”. They had arrived in Hong Kong in 1892 to serve in the Hong Kong Regiment of the British Army. The mosque was supported financially by Muslim soldiers in the early 20th century.

After the original mosque was closed due to damage during construction of Hong Kong’s Mass Transit Railway (MTR), a newly built mosque opened at its current site, Tsim Shau Tsui, in 1984.

Kowloon Mosque remains a vibrant place of worship. It is mostly frequented by Muslims who have their roots in the Indian subcontinent. Many of them live in the nearby Chungking Mansions area, home to many ethnic minorities.

The mosque is a vital cultural nexus for ethnic Muslims, a place where they assemble for religious and social life.

The history and current role of the mosque explain why the police action risked provoking inter-ethnic tensions. It could stir mistrust between majority non-Muslims and the Muslim minority, potentially and most dangerously inciting Islamophobia. As one Muslim businessman sprayed in front of the mosque, Philip Khan, said:

It is not a personal thing, but they are doing it against my religion, and I am against it.

The increasing violence has stunned the international community. Nobody knows when the government’s measures to end the protests might be effective.

Yet, despite the turmoil of recent months, the civic quality of the ordinary people of Hong Kong shines through. Their actions in protecting the mosque and respecting the long-standing ethnic Islamic tradition distinguish their home as a city of conscience and a unique frontier for protecting the Muslim minority.