Over the years, advances in technology and transport policy have greatly impacted drivers. In the 1980s this came in the form of random breath testing, and more recently, mobile drug testing.

A new policing tool under consideration may have a similar effect, as the New South Wales legislature considers the camera-based detection of illegal mobile phone use. Other states have also indicated interest in the program.

If the NSW rollout (scheduled for December) is enacted, within months there could be widespread detection of drivers illegally using mobile phones. This will likely receive community support, as the use of handheld phones is recognised as being dangerous.

Currently, an estimated two in three drivers (at least), are tempted to make or take a call, text, or browse the internet while driving. With these cameras, driver behaviour is likely to change radically, simply by increasing the risk of detection.

How will it work?

The cameras (which can be fixed or mobile) and their supporting software have been developed by Australian-Indian alliance Acusensus.

Known as the Heads-Up Distracted Driving Detection and Enforcement Solution, they can be used 24/7. As with speed cameras, a sensor system records the speed of vehicles, and a specialised camera captures a high-resolution image of the vehicle, driver and registration plate. 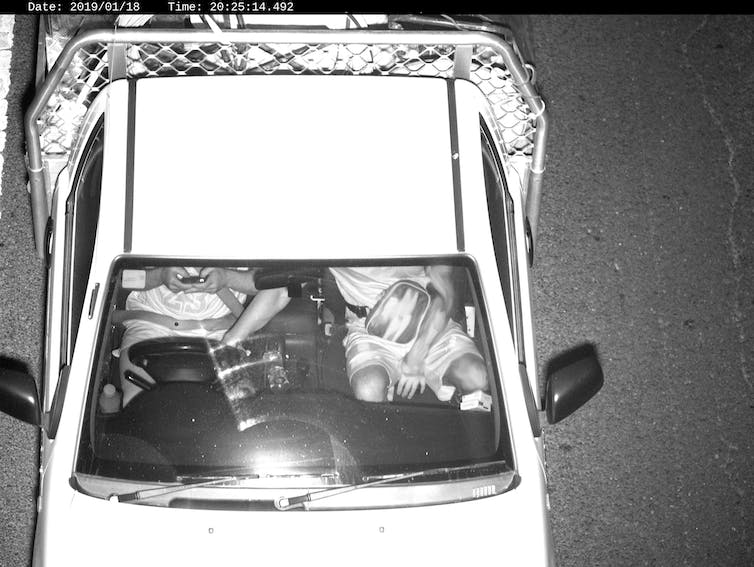 If the legislation is enacted, a community awareness campaign will be conducted to educate drivers about the new enforcement tool. Transport NSW, Author provided (No reuse)

Using artificial intelligence, the system examines images to detect the possibility of mobile use. While all vehicles at a site are examined, only photos that are likely to show mobile use are sent to a human reviewer (with passengers and registration plates blurred).

If an offence is alleged, the evidence is forwarded to authorities who can issue fines.

• 104,000 evidence packages of drivers using a mobile were detected, screened and adjudicated as evidence of an offence

• offending happened throughout day and night, with only slight variation: slightly lower from 6am-9am; slightly higher from 7pm-9pm; and highest of all between 4pm-5pm

• 85% of offending drivers were the only person in the vehicle

• offending drivers were generally texting or viewing the mobile screen (28%), speaking on the phone (4%), simply holding the mobile (25%), or had the mobile on their lap (43%).

Currently in NSW, about 40,000 traffic infringement notices are issued annually for mobile use. During the trials, a limited number of cameras detected more than 104,000 offences within months.

The NSW government has announced plans for at least 135 million vehicles to be screened annually. If a similar detection rate is assumed, this means 1.65 million offences can be expected to be detected each year by the cameras.

However, these estimates are likely at the high end, as drivers will probably change their mobile use rapidly following the rollout.

Currently, drivers who use a mobile illegally are fined A$337 and deducted 5 demerit points. Novice drivers, who aren’t permitted to use a phone at all, may exceed their limit with one offence and have to serve a three-month suspension.

But these penalties won’t apply at the start of the program, and there will be a three-month warning letter period for drivers.

Signage indicating mobile phone detection cameras are being used will also be placed on roads to make drivers aware.

Trouble in the courts

The proposed legislation will have a significant impact on the justice system and on driver licence administration, as large numbers of drivers will experience penalties and potential licence loss, and may seek to challenge infringements.

There are some heavily-debated aspects of the program. Firstly, the legislation will presume an object held by a driver is a phone and place an onus on a driver to prove it isn’t. This may be problematic if the object looks similar to a mobile phone, such as a chocolate bar or wallet. Under current enforcement practice for alleged illegal mobile use, police officers must provide evidence the object was a phone.

Issues around privacy also arise. Camera-based mobile enforcement is invasive, as images are purposely taken of the driver and passenger compartment. While the cameras are used in public spaces, privacy concerns remain around how images are stored, accessed and disposed of. Also, who has access?

The form in which evidentiary images are presented must be subject to explicit safeguarding rules, which should also be audited. Also, a legal obligation to delete images where no offence is detected must be enacted.

Given the scale of enforcement possible with the cameras, there will also be pressure to extend the program for other surveillance purposes.

The decision to introduce mobile phone enforcement in NSW, while worthwhile, seems rushed. While some elements of an evaluative approach are evident, others are missing.

For instance, there has been:

• no public report of the trial released,

• limited modelling (at best) of the impact on the justice system,

• no modelling of the impact on driver licence administration and

• no modelling of the personal, social and economic impact of potential widespread driver licence loss.

This is not to say the program should not be advanced. But it seems appropriate a sunset provision is inserted into the legislation, to allow for a review of the impact of the program.

Especially since the new camera-based enforcement approach will likely be a game-changer.