A directive ordering Queensland Health staff to avoid upgrades to the state’s hospital electronic medical record system during parliamentary sitting weeks was recently reversed. After the email containing the directive was leaked, the state’s health minister Steven Miles revoked the directive. He said the timing of upgrades should be based on “what’s best for clinical care”. 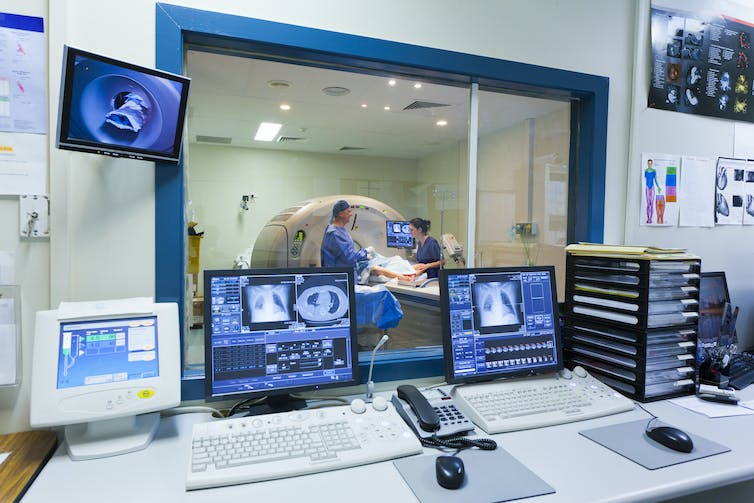 The directive to avoid the ieMR upgrades was overturned after an email to Queensland Health staff was leaked to the media. shutterstock

The directive to refrain from ieMR upgrades during sitting weeks seems to be connected to 38 system outages earlier this year. Most of these happened following upgrades performed by Cerner. On at least one occasion, upgrades didn’t go smoothly, and led to system outages that required clinicians to revert to paper-based methods.

The rollout of the ieMR system to new hospitals, which began back in 2011, was put on hold earlier this year.

Monolithic systems may not be the future

A major difficulty with “monolithic” (that is, all-in-one systems developed by a single company) e-health systems is that a single design team is attempting to solve an incredibly broad set of complex problems.

Health systems involve interactions between dozens of different types of highly trained professionals. Building software to effectively support just one speciality to do its job efficiently is enormously challenging. Developers of unified electronic medical record systems must build systems that support dozens of them. As a result, it’s unlikely that such systems provide the best possible solutions for any particular speciality.

Read more: Everything you need to know about Australia's e-health records

Because of this, research and development in e-health systems is moving away from monolithic, one-size-fits-all systems. Companies are instead working on allowing smaller, more specialised health IT systems to work together using parallel systems designed to work in concert.

In theory, this means clinicians and departments will be able to use the best software for their particular requirements, while each system can communicate with the others in a common language.

Of course, it won’t be quite that simple in practice. But Queensland Health’s current adoption of massive centralised systems imposed from the top down is extremely hard to get right.

A history of e-health system problems

The ieMR project isn’t the first time Queensland Health has had difficulties with a health-related IT system. An attempt to replace the payroll system, prompted in the late 2000s, was disastrous.

The Commission of Inquiry report into the payroll system is such a compelling description of an IT project failure that I use it to show my undergraduate students an example of what not to do.

The report describes a litany of problems including conflicted advisers, unrealistic timetables, woefully insufficient attention to software requirements, inadequate testing and, to top it all off, a lack of any contingency plan in case the system wasn’t ready in time. This led to the deployment of a system with known critical flaws.

The results were predictably catastrophic, costing the state hundreds of millions of dollars.

It’s important to point out, however, that the ieMR is a completely separate system. Nonetheless, a consultant’s report in 2014 reportedly said “no lessons have been learned” from the earlier payroll system disaster.

While later efforts attempted to fix issues identified at that time, decisions made previously - especially major architectural decisions such as the choice of a particular off-the-shelf software system - cannot easily be undone.

The problems are varied

Difficulty managing service upgrades is one of many challenges the ieMR project has faced. Other issues identified include:

Other states have struggled, too

Emergency departments in New South Wales hospitals implemented a new electronic medical records system (also supplied by Cerner) in 2009 as part of a planned statewide rollout. The system was unpopular with clinicians, and one peer-reviewed academic study indicated it was associated with longer emergency department wait times.

Since the commencement of the ieMR project in 2011, hundreds of millions of dollars have been invested. Sunk costs of this kind, and institutions that tend to follow the status quo, often discourage critical analysis and the exploration of alternative paths.

As the decision has been made to pause the rollout, now seems like an opportune time to properly consider whether current e-health system architecture is the best option for the future.