Review: What the Day Owes to the Night, Vessel, and Outwitting the Devil, OzAsia Festival, Adelaide, 22 October - 8 November

The most exciting work at OzAsia cuts across genres, styles, and cultures to create something distinctive and new: a work of art that could not exist without equality in the exchange between Western and Asian cultures. Under artistic director Joseph Mitchell, this brief has extended to engagement with the Middle East.

Perhaps because dance exists without language it has long been the place where Asia and the West have met most successfully. But funding and time are required to make such deep engagement between cultures possible. No surprise, then, Europe has become the centre for the generation of such work and three of the most outstanding works in this year’s festival were by European-based choreographers.

Two are of South Asian or Middle Eastern heritage while the third has a long history of deep engagement with Asia.

What the Day Owes to the Night

French choreographer Hervé Koubi grew up without full knowledge of his Algerian roots. His thrilling What the Day Owes to the Night reflects his coming to terms with that knowledge.

Working with non-professional dancers, hip-hop and breakdancing from the streets of North Africa link up with Afro-Brazilian capoeira, wrapped in the spectacle of Sufi-style, whirling dervish dance.

The superbly fit and athletic all-male cast are shirtless. Skirts billow out when they twirl: patterns of extraordinary beauty and complexity. Perpetual motion, they twirl for impossible periods of time upside down on their heads. 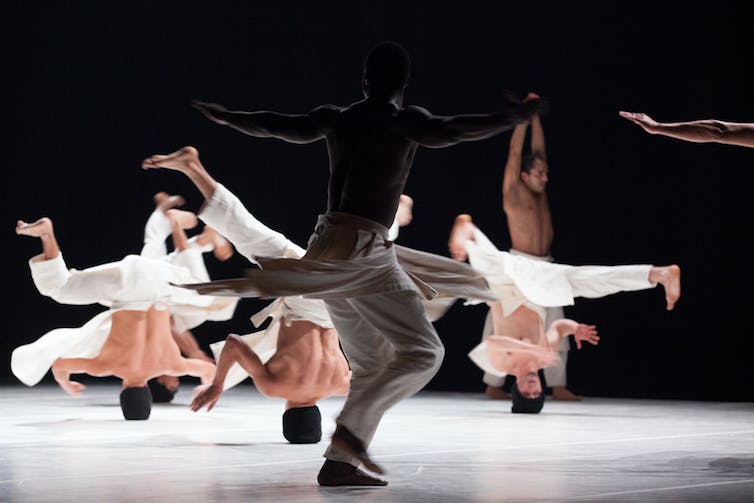 The dancers in What the Day Owes to the Night are ‘perpetual motion machines.’ Photo Karim/OzAsia Festival

The work is explosive and powerful. Bodies are thrown into the air and across the stage. The dancers are superbly masculine, but also graceful and generous with one another. It was a work that overwhelmed the senses in its technical genius, exuberance, and joy.

Belgian choreographer Damien Jalet’s Vessel extends from a collaboration with Japanese sculptor Kohei Nawa, exploring the ways dance and sculpture can come together.

The stage is a shallow pool of water surrounding a thin sculptural object, stark in its whiteness, resembling the top of a volcano. Dancers appear as non-human: heads tucked in front or behind, completely out of view. These headless forms attach to one another, fuse, and are expelled by some mysterious organic force. 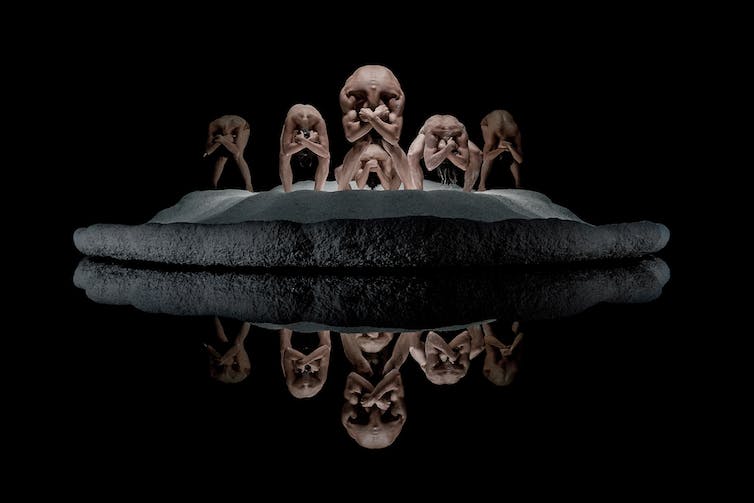 Vessel explores the way dance and sculpture can come together. Yoshikazu Inoue/OzAsia Festival

It is a hypnotic evocation of the power of Japan’s volcanic islands, reflecting Jalet’s long-standing personal connection with Japanese aesthetics, myth and religion.

Japanese cultural and religious systems reflect the natural world. In Vessel, organisms are perilously fragile. They are birthed, mutated, and expelled over moments in a larger cosmic time. We are in a state of altered consciousness. Anything is possible.

Akram Khan, born in the UK of Bangladeshi parents, has a long history of work that extends the choreographic language of traditional dance forms. Building on the North Indian classical dance form of kathak, communicating stories through gesture and movement, he has generated a new kind of contemporary dance.

Outwitting the Devil draws on the Epic of Gilgamesh to offer a parable for our times. A tale of violence where a powerful, proud man unleashes terrible forces by taking on the natural world. Ultimately, all is lost. Nothing remains of civilisation except smouldering ruins.

Read more: Guide to the classics: the Epic of Gilgamesh

Khan offers a model for how dance can fuse cultures and movement vocabularies to create something new that defies categorisation. 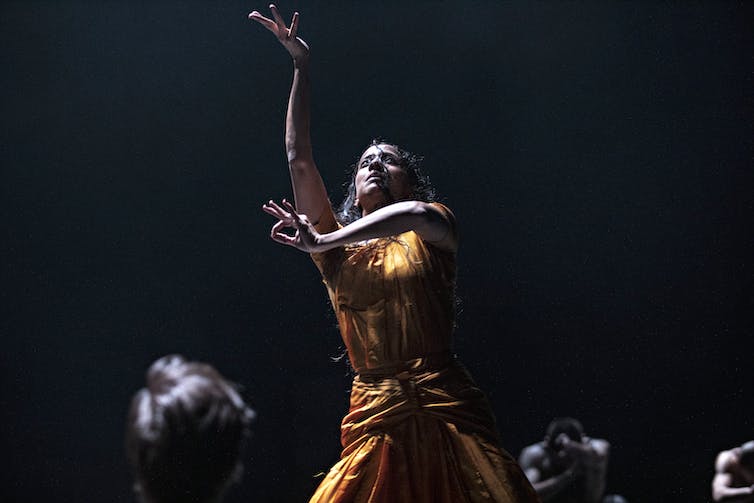 This is intercultural work in which the dance cultures embedded in the bodies of performers is essential to the telling of the story.

These works are intensely visceral. What the Day Owes to the Night produced a whirling, vibrating energy that remained in the body after the show. Jalet’s Vessel unfolded like an organism over geological time and Khan’s work ended with epic destruction and nearly unbearable sadness and heartbreak: both felt like they had permanently rearranged my DNA.

All show how works by master choreographers living outside of the Asia-Pacific region can successfully fuse Asian and Middle Eastern aesthetics and sensibilities and generate new stories and ways of moving. Koubi’s work a desert ritual, Jalet’s the forces of nature, and Khan’s the fall of civilisation.

When these elements are harnessed by thought, care, openness and generosity of spirit, and when the time needed to create such work is funded, what dance can do for the human spirit and soul is revealed.