When five former fire chiefs held a news conference on Thursday to urge the federal government to take more action on climate change, it was a challenging moment for Scott Morrison.

Those who fronted the cameras represented a group of 21 men and two women, who make up the Emergency Leaders for Climate Action. These people have led fire and emergency services all around the nation.

They’re powerful voices, because they are advocates with compelling experience and expertise. The group’s messages are that we’re in “a new age of unprecedented bushfire danger”, climate change is the key reason why things are getting worse, and the government needs to respond with more resources and a better policy to reduce emissions and move to clean energy.

The problem is, as group founder Greg Mullins, former Fire and Rescue NSW commissioner, put it succinctly, “this government fundamentally doesn’t like talking about climate change”. 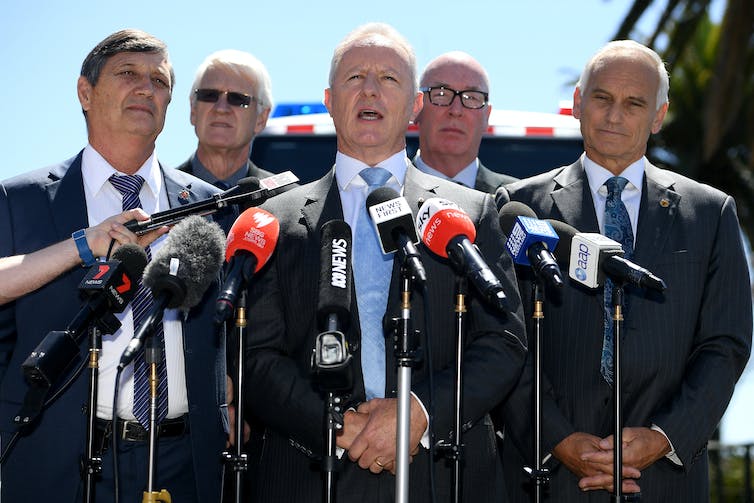 The five former fire chiefs have powerful voices due to their compelling experience and expertise. Dan Himbrechts/AAP

The devastating fires are a dramatic additional element intensifying the pressure on a government already increasingly on the back foot over climate change, as it responds poorly to a complex set of policy problems.

It’s not that Morrison denies climate change. It’s that he refuses to acknowledge it as a central issue, either because he doesn’t see it as such or because he fears provoking his right wingers.

First, in Australia (as internationally) activism is rising. This should be broadly defined. Put aside the Extinction Rebellion, which may alienate more people than it persuades. Rather, include in the definition the many companies now factoring climate change into their planning, investment, and public statements.

Morrison might rail against activists hitting resource companies via secondary boycotts, and commentators might denounce so-called “woke” behaviour by business. But the long view indicates a tide is running here and its direction is clear.

Second, there is a general recognition the government’s climate policy is badly wanting. Emissions are rising. Its modest centrepiece - a fund paying for projects to reduce or capture emissions – isn’t doing the job. The fund’s limitations were tacitly acknowledged when recently the government set up a panel which sought submissions on how it could be enhanced.

Third, Angus Taylor, minister for energy and emissions reduction, has frustrated those in the energy sector and the states. He’s too confrontational and short on people skills (in contrast to his predecessor Josh Frydenberg). His cheap shot accusing the Sydney City Council of ludicrous travel costs blew into a major embarrassment.

Next Friday Taylor will again be under scrutiny when he meets the states at the COAG energy council. The last meeting, nearly a year ago, turned into a nasty stoush between Taylor and the NSW minister.

If Taylor’s performance doesn’t improve in the next few months Morrison – who will be the one eventually carrying the can for policy failure – surely should move him. It would be interesting to see how (say) a Simon Birmingham or a Mathias Cormann would go in the portfolio. Better, you’d think.

Read more: 'Like volcanoes on the ranges': how Australian bushfire writing has changed with the climate

It was no wonder Morrison wanted to contain partisan argument while the fires rage. It’s a reasonable view for a prime minister to take, with a basis in past practice, but was also politically driven.

Morrison has been assisted in this by Labor, despite the ALP recently voting in parliament (without success) for a “climate emergency” to be declared. Anthony Albanese believed there was no gain in seeking to score points during a disaster, and danger in doing so.

But a moratorium, although mostly adhered to by Liberal and ALP federal politicians, was never going to happen more generally. Indeed some people, like the retired fire chiefs, judged this was precisely the moment to press their point.

It was predictable the Greens would strike hard; climate is core ground for them. But that Deputy Prime Minister Michael McCormack would take the bait, leaping in to condemn “the ravings of some pure enlightened and woke capital city greenies”, showed a lack of discipline, probably in part a reflection of the strain the Nationals leader is under as he tries to manage a difficult party room.

Some believed McCormack was playing to his base. If so, he’d only be talking to part of it, most notably those with an eye to the coal industry. Many farmers are very aware, first hand, of the impact of the changing climate.

After its election loss, there’s been much talk about how Labor is caught between its dual constituencies on climate – inner city progressives versus traditional suburban workers.

But the Liberals face their own dilemma, which could deepen as the issue amps up in the electorate. We have seen over many years the split within the Liberal party, and the very high costs it has extracted. As Morrison assesses how to pitch to voters in the future, he might have to be careful of straining internal unity.

Over coming months, the fires’ impact on public opinion will presumably be measured in the focus groups through which the government hears its “quiet Australians”.

More immediately, Morrison won’t be able to escape a response when this crisis passes. His moratorium will make expectations greater.

John Connor was formerly CEO of the now defunct Climate Institute, which commissioned from the CSIRO a 2007 research paper – that turned out to be prescient - on the link between climate and bushfires, titled Bushfire Weather in Southeast Australia: Recent Trends and Projected Climate Change Impacts.

Connor, who now heads the Carbon Market Institute (which describes itself as a peak industry body for climate action and business) suggests the current situation provides the opportunity for an “armistice” - a chance to build a platform on the middle ground for the climate debate.

One step, Connor says, would be for the government to establish a parliamentary inquiry to examine the growing risk climate change presents for the fire scene and the resources required for the future.

“It could be a stepping stone to a more mature debate about carbon policy for the broader economy,” Connor says, although he admits “I’m a professional optimist”.

The government’s former drought co-ordinator, Stephen Day, wrote in his report, finally released last week: “As a consequence of climate change drought is likely to be more regular, longer in duration, and broader in area”.

What’s striking about Day’s observation is how matter-of-fact it is. Climate change is stated as a reality from which other considerations flow. The same reality applies to bushfires. It also applies to the need to move the economy to a new energy mix and net zero emissions by 2050.