Eyebrows can turn a smile into a leer, a grumpy pout into a come hither beckoning, and sad, downturned lips into a comedic grimace.

So, it’s little wonder these communicative markers of facial punctuation have been such a feature of beauty and fashion since the earliest days of recorded civilisation.

From completely shaved mounds to thick, furry lines, eyebrows are a part of the face we continue to experiment with. We seek to hide, exacerbate and embellish them. And today, every shopping strip and mall has professionals ready to assist us with wax, thread and ink.

In the court of Elizabeth I, to draw attention to the perceived focal point of a woman’s body – her breasts – the monarch would pluck her eyebrows into thin lines or remove them completely, as well as shaving off hair at the top of her forehead. 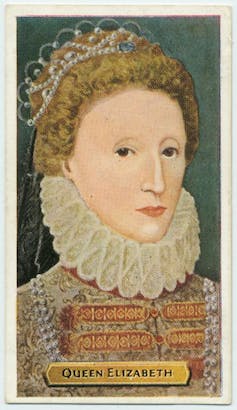 This was an attempt to make her face plain and blank, thereby directing the viewer’s gaze lower to her substantial décolletage.

Although the intentions were different, nonexistent or needle-thin brows had also been common in ancient China and other Asian cultures, where women plucked their eyebrows to resemble specific shapes with designated names such as “distant mountain” (likely referring to a central and distinctive point in the brow), “drooping pearl” and “willow branch”.

In ancient China, as well as in India and the Middle East, the technique of threading - the removal of hairs by twisting strands of cotton thread - was popular for its accuracy. The technique, referred to as “khite” in Arabic and “fatlah” in Egyptian, is enjoying renewed popularity today. 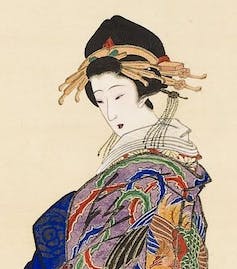 Detail from Tayu with Phoenix Robe, a Japanese painting by an anonymous artist. Honolulu Academy of Arts/Wikimedia, CC BY

In Japan between 794 and 1185, both men and women plucked their eyebrows out almost entirely and replaced them with new pencilled lines higher up on the forehead.

Eyebrows of Ancient Greece and Rome, on the other hand, are frozen in contemplation.

They are often represented in sculptures through expressive mounds devoid of individual or even vaguely suggested hairs: in men they are strong and masterful furrows above a purposeful gaze; in women, soft and emotive. 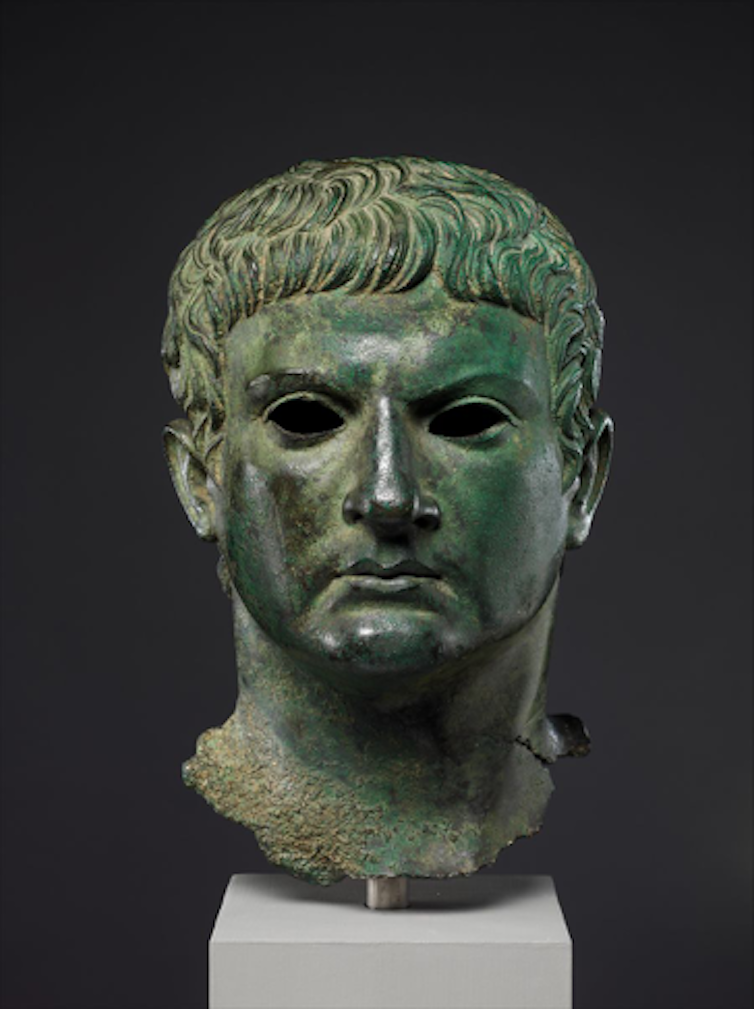 This lack of detail demonstrates a fondness, in some corners of ancient Greek and Roman society, for joined or “continuous” brows.

Poet of tenderness, Theocritus, openly admired eyebrows “joined over the nose” like his own, as did Byzantine Isaac Porphyrogenitus.

For much of the 19th century, cosmetics for women were viewed with suspicion, principally as the province of actresses and prostitutes. This meant facial enhancement was subtle and eyebrows, though gently shaped, were kept relatively natural.

Despite this restraint, a certain amount of effort still went into cultivation. A newspaper article from 1871 suggested intervention during childhood to thicken them:

If a child’s eyebrows threaten to be thin, brush them softly every night with a little coconut oil, and they will gradually become strong and full; and, in order to give them a curve, press them gently between the thumb and forefinger after every ablution of the face or hands.

As fashions became freer after the first world war, attention was once again focused more overtly on the eyes and eyebrows. 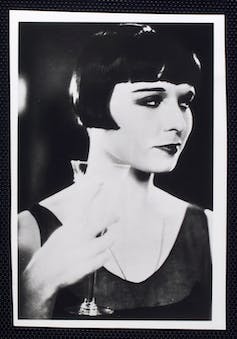 This was partly to do with the development of beauty salons during the 1920s, many of which offered classes in makeup application so women could create new, bold looks at home.

The fashion for very thin eyebrows was popularised by silent film stars such as Buster Keaton and Louise Brooks, for whom thick kohl was a professional necessity and allowed a clearer vision of the eyebrows – so crucial, after all, for nonverbal expression on screen.

The amount of attention paid to eyebrows continued to change according to specific global events.

In the 1940s, women began to favour thicker, natural brows after several decades of rigorous plucking to achieve pencil-thin lines. Considering the outbreak of the second world war had forced many out of a wholly domestic existence and into the workforce, it stands to reason they had less time to spend in front of the mirror, wielding a pair of tweezers and eyebrow pencil. 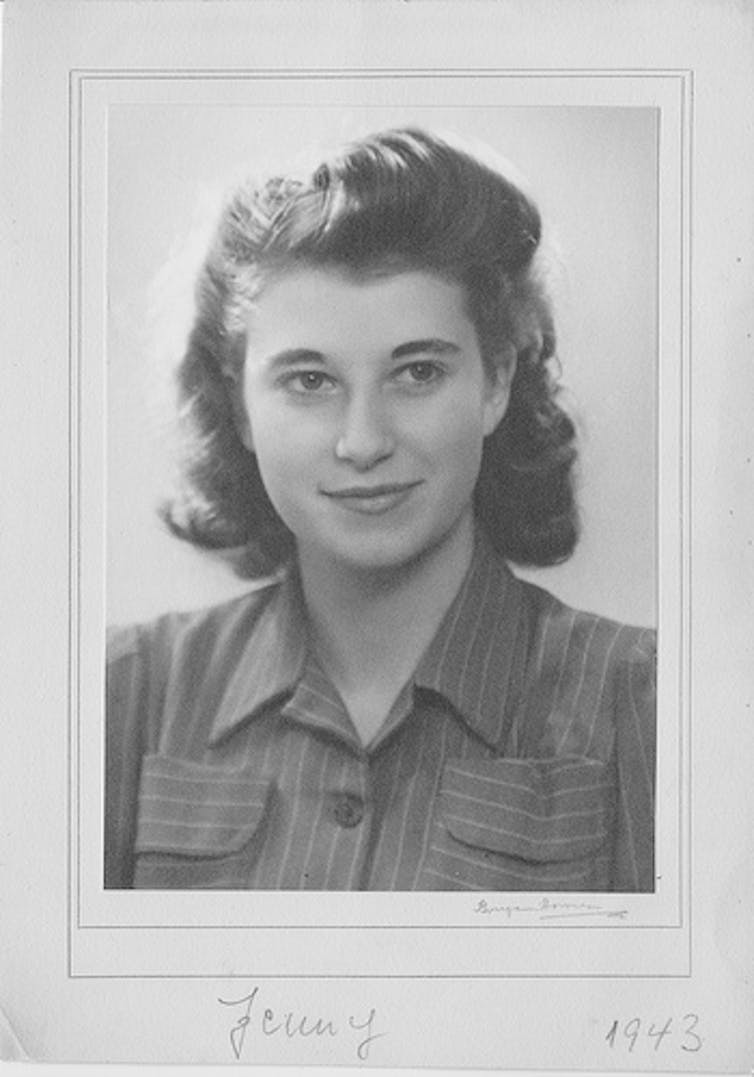 The natural look, circa 1943. Author provided

The post-war 1950s saw wide, yet more firmly defined brows and from the 1960s onwards various shapes, sizes and thicknesses were experimented with, accompanied by a firm emphasis on individuality and personal preference. 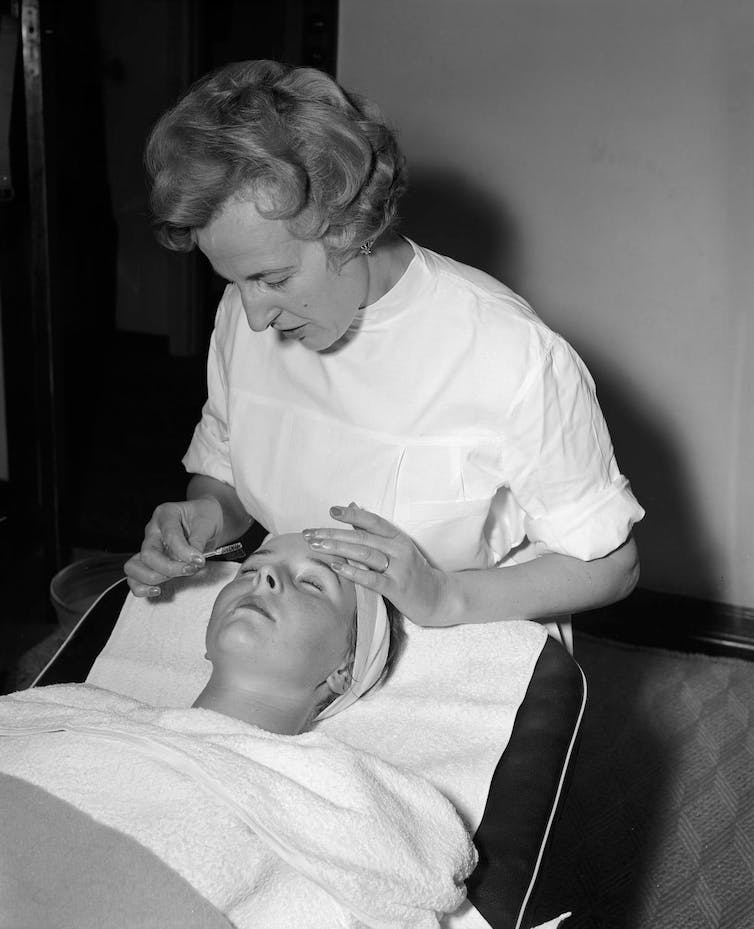 A brow beautician in a South Yarra salon in 1960. Laurie Richards Studio/National Library of Australia, CC BY

When Dwight Edwards Marvin’s collection of adages and maxims, Curiosities in Proverbs, was published in 1916 it included the old English advice:

If your eyebrows meet across your nose, you’ll never live to wear your wedding clothes.

The “mono-” or “uni-brow” had become suggestive of a lack of self care, particularly in women.

Research undertaken in 2004 reported American women felt judged and evaluated as “dirty”, “gross” or even “repulsive” if they did not shave their underarm or leg hair, or pluck and shape their eyebrows. As the most visible of these areas, untamed eyebrows perhaps point to the bravest exhibition of natural hair.

Today, model Sophia Hadjipanteli sports a pair of impressively large, dark joined eyebrows, and has assertively fought back against the legion of online trolls who have abused her for this point of difference. 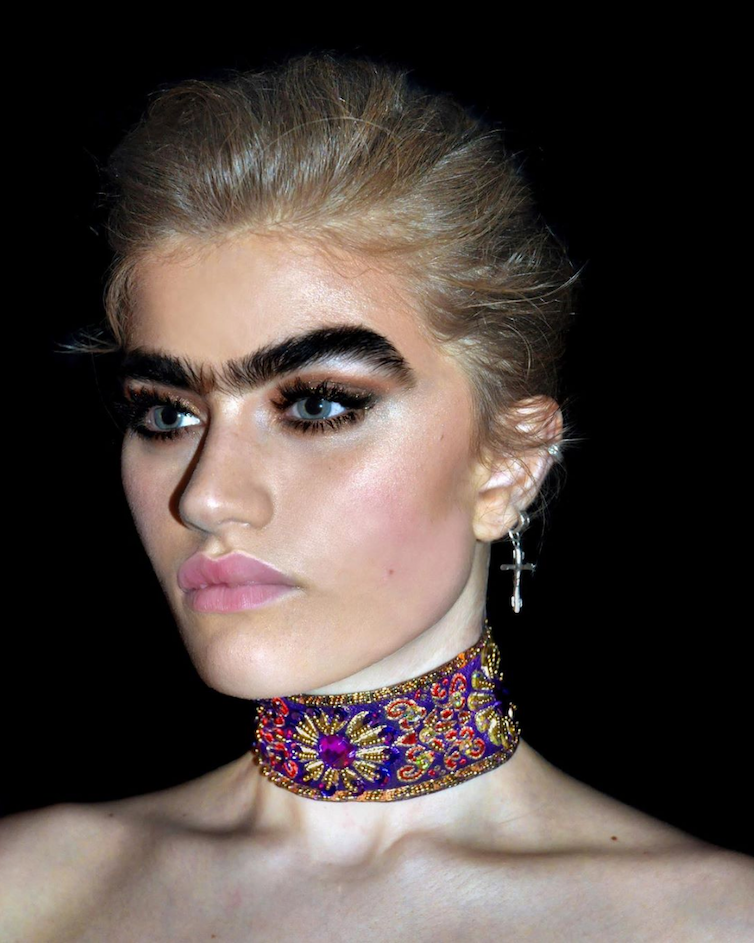 A reference back to the distinctive brows of Frida Kahlo, Hadjipanteli’s look is linked to an ongoing debate surrounding women’s body hair. 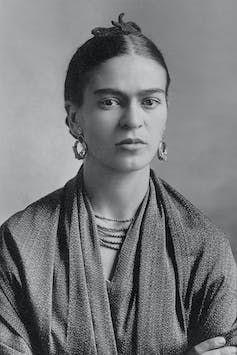 For many, excessive plucking and shaping has become emblematic of the myriad requirements women are expected to comply with to satisfy restrictive societal beauty norms.

Still, plenty of people with eyebrows are dedicating time and money to their upkeep. In Australia, the personal waxing and nail salon industry has grown steadily over five years to be worth an estimated A$1.3 billion and employ more than 20,000 people.

Over this time, social media has offered a diverse and changing menu of brow choices and displays.

One choice: the “eyebrow slit” – thin vertical cuts in eyebrow hair – has re-emerged online and in suburban high schools. It’s important to emphasise re-emerged because, with beauty as with clothing, what goes around comes around. 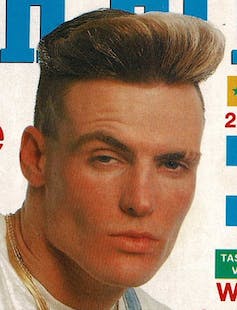 The eyebrow slit was especially popular amongst hip hop artists in the 1990s, and draws appeal due to its flexibility: there are no firm rules as to the number or width of the slits, which originally were meant to suggest scarring from a recent fight or gangsta adventure. More recent converts have been accused of cultural appropriation.

Some have experimented by replacing plain slits with other shapes, such as hearts or stars, though plucking or shaving brows into unusual shapes is – as we have seen – by no means new either.

If the popularity of recent trends is anything to go by, eyebrow fashion will remain on the lush side for some time.

The “Instagram eyebrow” (thick brows plucked and painted to create a gradient, going from light to very dark as the brow ends) is inescapable on the platform and beyond. Makeup for brows is therefore also likely to continue, providing a clear linear connection through nearly all the eyebrow ideals since ancient times.

The latest offering to those seeking a groomed look is “eyebrow lamination”, a chemical treatment that uses keratin to straighten individual hairs - a kind of anti-perm for your brow.

Those still searching for their eyebrow aesthetic may benefit from some wisdom shared by crime and society reporter Viola Rodgers in an 1898 edition of the San Francisco Call newspaper.

In a piece which ran alongside an interview with the man who had inspired Mark Twain’s Tom Sawyer character, she advised that the appearance of one’s brow conveyed more than just their grooming habits:

Eyebrow slits? We can only imagine what Viola would think.