Sydney and its suburbs have been enveloped in haze over the past few days. The haze is a mixture of bushfire smoke and dust blown in from western New South Wales. As particles move from rural locations, like Gospers Mountain in this case, they make grey cities.

In Australia, dust blurs the distinction between the bush and the city. Elsewhere it blurs the farmlands with the concrete jungles, and nation-states with regions.

Read more: Explainer: how a dust storm, and hazardous air quality, can harm your health

Spiralling dust challenges our usual ways of thinking about bush, farm, industry, rich city and poor city divides. It travels across geographical and socioeconomic boundaries. There is no easy way to stop it.

A dust storm hit Mildura in northwestern Victoria this week.

Dust’s composition and unfettered mobility make it a global epidemic. Once airborne, dust spares no one in its path. It sits in the lungs of cities and citizens. It is stubbornly difficult to eradicate.

The harms of dust

The dust brings with it old and new anxieties about life, death and disease. Air pollution caused 2.4 million deaths in India and China in 2017.

Dust is also generated from within cities, particularly from construction sites. Regulatory bodies seek to contain these sites within enclosures. Where the regulatory frameworks are weak, environmental bodies impose fines.

Construction dust adds significantly to air pollution in Indian cities. In Kolkata, construction materials are stored on sidewalks and roads. Even with fines, it is nearly impossible to make barriers that can contain dust. 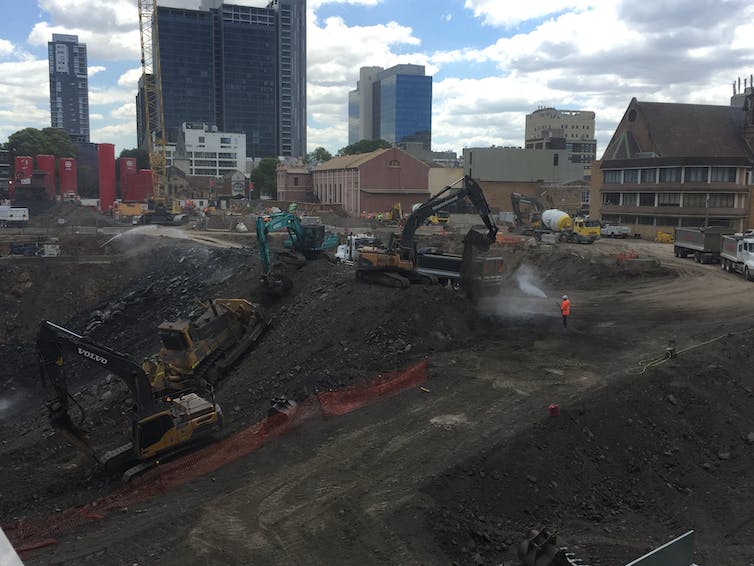 Haze can be seen, but the threats of dust are often invisible. Dust plumes can carry bacteria and viruses. Dust can cause a variety of respiratory and circulatory diseases.

In Singapore, dust mites have been claimed to be the main cause of respiratory allergies.

The colours of dust

The so-called “Asian dust storms” are yellow. Originating in the deserts of Northern China and Mongolia, strong winds carry yellow dust all the way to the Korean Peninsula via the jet stream.

These storms have increased in China, and the levels of industrial pollutants in the dust often have too. Yellow dust also carries viruses, fungi, bacteria and even heavy metals, none of which is good for respiratory health. 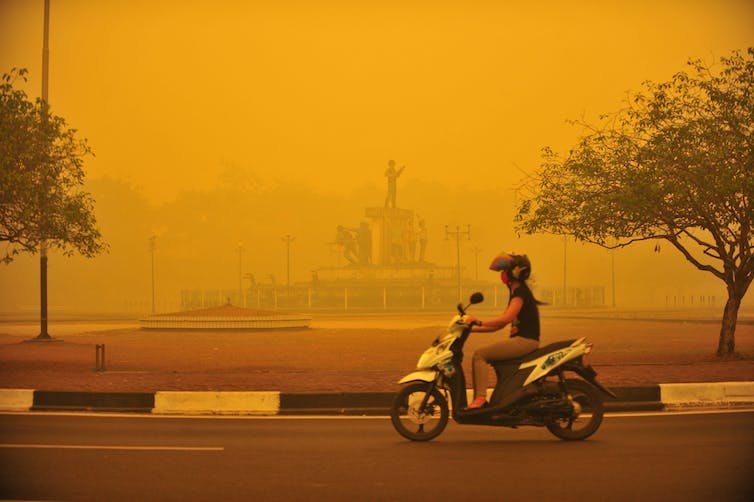 Earlier this year, Thailand was affected by yellow dust. Authorities in Bangkok used water cannons and even cloud seeding in attempts to limit the dust’s effects.

The history of dust

Today, talk of smoke, haze and smog is common to the world’s cities. Once dust settles, we become habituated to it. Dust resides in landscapes and humans. And dust tells stories about historical wrongs.

Australia has a long history of death from exposure to asbestos dust. Dust wiped out the town of Wittenoom in Western Australia.

The first documented asbestos death was recorded in the UK in 1906. Although asbestos has been known since then to be deadly, it continues to be a stubborn presence around the world. Worldwide consumption of asbestos is nearly as high as it has ever been.

In the early 1930s, overcultivation of wheat on the Great Plains of the US created the Dust Bowl. Overploughing, poor land management and severe drought left the topsoil exposed. Spring winds picked up this loose soil, resulting in “black blizzards”.

‘Black blizzards’ added to the misery of inhabitants of the impoverished Dust Bowl.

The dust affected huge swathes of the country, including the cities of Chicago and New York. It deepened the economic crisis of the Great Depression and caused mass migration.

Haze from forest fires has been a regular occurrence in Singapore since at least the 1970s. These have originated in the south of Malaysia, Borneo and Sumatra. In the 1990s, transboundary pollution became the subject of two regional summits, leading to the ASEAN Agreement on Transboundary Haze Pollution in 2002.

In 2014, Singapore passed the Transnational Haze Pollution Act. This law enables regulators to prosecute companies and individuals, even beyond the nation-state’s borders, that cause air pollution.

Read more: We built an app to detect areas most vulnerable to life-threatening haze

A pervasive challenge for cities

Our bodies create dust and dust enters our bodies. Species emerge that live off dust.

What makes dust harder to reckon with in our imaginations is that its particles are almost invisible and its source is generally unknown. It is an amalgam of an uncountable number of sources, often from many different countries and producers.

Whether resulting from geological events, deforestation, construction or some indeterminate combination of each, our inability to pinpoint dust’s source makes climate accountability extremely difficult.

A key focus for cities now and in the future is to think about how we manage dust, the plans and practices we put in place to limit dust creation and contain its spread.