While most Australians still view the economy as the most important issue facing the country, a new survey released today shows climate change is rapidly becoming a major concern, as well.

Now in its 12th year, the Scanlon Foundation survey is the largest- and longest-running poll tracking public opinion on social cohesion, immigration, population and other issues in Australia. The 2019 survey was administered by telephone and the internet in July-August to a representative sample of 3,500 respondents.

The largest change in the survey from 2018 to 2019 came with the open-ended question: “What do you think is the most important problem facing Australia today?”

Both years, the economy ranked as No. 1. But this year, climate change jumped to a clear second with the equal-largest increase from one year to the next, up from 10% to 19% in our telephone-administered survey and from 5% to 17% in the self-completed online survey. 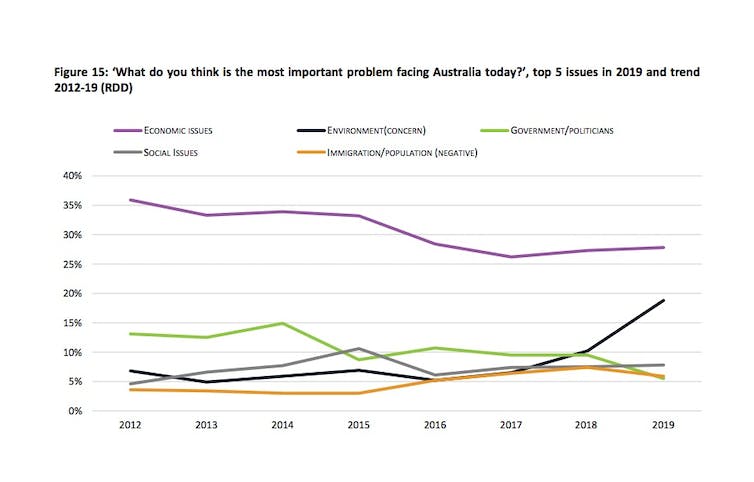 Responses to the most important problem facing Australia in telephone-interview survey. Author provided

As would be expected, there were major variances in the responses depending on demographics.

The responses also varied by state – 20% of Victoria residents and 18% of NSW residents said climate change was the biggest problem, compared to 8% in Western Australia.

And there was a stark difference depending on political affiliation, with 54% of Greens voters saying climate change was the most important issue, compared to 21% of Labor, 7% of Coalition and just 3% of One Nation voters.

Last year, immigration was a major political issue in Australia. Several polls, variously worded and with different approaches to sampling, found majority support for a reduction in the numbers of immigrants permitted into Australia each year.

Prime Minister Scott Morrison said his government was listening to the public’s concerns and responded with changes, including a reduction in the annual immigration target.

This year, however, there is evidence of a decline in public concern.

The percentage of people who agreed the immigration intake was too high in the annual Lowy Institute poll fell from 54% in 2018 to 47% in 2019.

And in our poll, the proportion of those who agreed with a reduction in the number of immigrants fell marginally from 43% in 2018 to 41% in 2019 in our interviewer-administered survey and from 44% to 41% in the self-completed version. 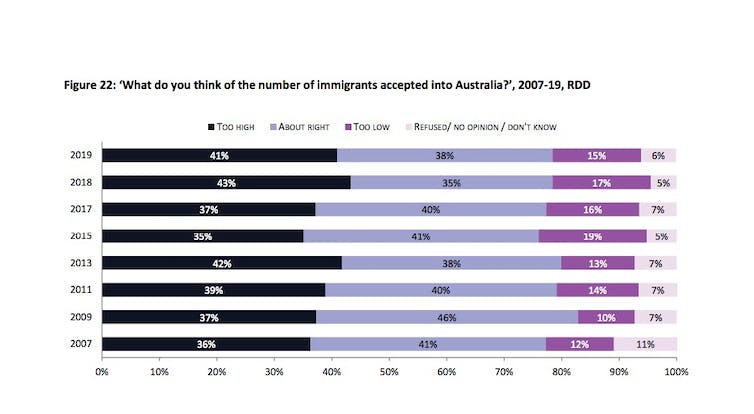 Responses to the question about the number of immigrants in Australia in telephone survey. Author provided

Endorsement of the value of immigration

There is continuing endorsement of the value of immigration by a substantial majority of Australians.

Since 2015, the survey has tested public support for immigration restrictions on the grounds of race, ethnicity or religion, which have been advocated by minor right-wing and populist parties. The consistent finding is that a large majority – 70% to 80% of Australians – do not support such policies.

But concerns remain over the impact of immigration

While public opinion is generally positive with regard to immigration today, many are concerned about the impact of rising immigrant numbers on their daily lives.

Read more: Australians think immigration should be cut? Well, it depends on how you ask

Seventy percent of respondents said they were concerned about “overcrowding”, 60% by the impact of immigration on housing prices and 58% by the impact on the environment.

A new question in 2019 asked for responses to the proposition that “too many immigrants are not adopting Australian values”. Nearly two-thirds of respondents (67%) agreed with the statement.

In 2018 and 2019, a new question asked respondents “are you personally concerned that Australia is too harsh in its treatment of asylum seekers and refugees?”

Here, too, there were major variances in viewpoints depending on demographics.

For instance, 87% of Greens voters and 61% of Labor voters were “a great deal” or “somewhat” concerned, compared to just 30% of Coalition voters and 16% of One Nation.

On the much broader question of social cohesion, our survey continues to find a large measure of stability in Australia.

One indication is provided by the Scanlon Monash Index (SMI), which aggregates responses to 18 questions and measures attitudes in five areas of social cohesion: belonging, worth, social justice, political participation and acceptance of diversity.

Over the course of our 12 national surveys, the SMI registered the highest level of volatility during 2009-2013, the period of the Rudd and Gillard governments, when it declined by more than 10%. It has been largely stable since 2014.

On the individual factors that comprise the SMI, however, there have been some significant changes. When it comes to sense of belonging, for instance, just 63% said they felt this to a “great extent” in 2019, compared to 77% in 2007.

And on the acceptance of diversity, 19% of respondents said they had experienced discrimination on the basis of race, ethnic origin or religion, which was significantly higher than the 9%-10% from 2007 to 2009.