It’s happened to many of us at some point in our lives: we finish our bowel movement, look down in the bowl and have a moment of panic when we see an unusual colour.

Poo can be found in many colours other than brown, with green poo often eliciting concern. But it’s surprisingly common and is usually no reason to be alarmed.

Read more: Do we have to poo every day? We asked five experts

Why poo is usually brown

The brown colour of poo initially comes from the red of blood. Haemoglobin is the red protein in blood that transports oxygen around the body. It’s eventually broken down into a substance called bilirubin.

In the liver, bilirubin is used to form bile and is released into the small bowel to help digest food. Bile then passes into the colon and the bilirubin is broken down by bacteria.

The final stage in the process is the addition of a substance called stercobilin, which gives poo its brown colour.

All shades of brown are considered normal.

Stool colour is very heavily influenced by the substances in the gut that digest food and what you eat.

Green stools contain significantly more bile acids than brown stools. If food is moving through the bowel very quickly – if you have diarrhoea, for instance – there isn’t enough time for the green bile to break down completely, giving stools a green colour.

Green leafy vegetables such as spinach and lettuce contain large amounts of chlorophyll (green pigment) bound to magnesium. This can lead to stools turning green. 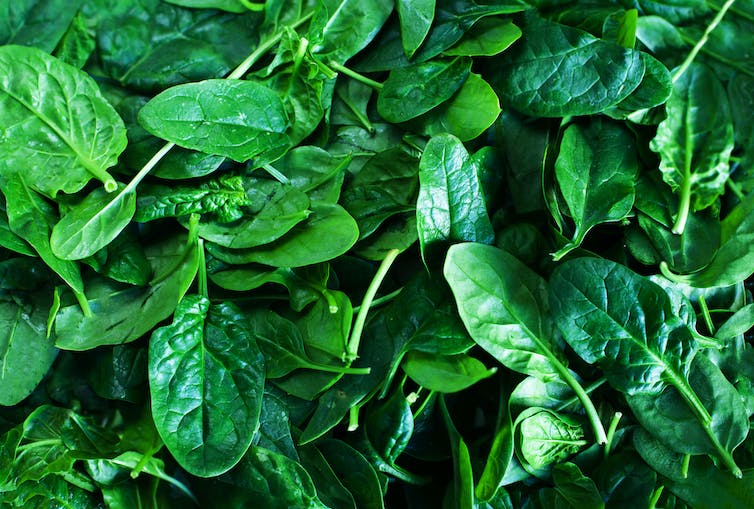 Sometimes it comes down to what you ate. Natali Zakharova/Shutterstock

Some green food dyes such as natural green 3 contain chlorophyll (green pigment) bound to copper which can turn stools a dark green.

Why do babies have green poo?

Green stools in formula-fed infants are often due to formulas containing high amounts of iron.

But even for breastfed infants it’s normal to have yellow-green or green poo.

In fact, it’s normal for babies’ poo to be many different colours. One study found pale stools were caused by partially digested milk fats, yellow stools were due to stercobilin (which is also involved in making poo brown) and other similar compounds, and dark stools due to bilirubin or the presence of meconium.

What about other colours of poo?

Some food dyes, food additives and naturally occurring colours are unable to be completely broken down in the gut and this can distinctly colour poo. Children who have consumed a lot of blue-coloured drinks, for instance, often poo blue.

Read more: Curious Kids: how does my tummy turn food into poo?

Blueberries can also turn poo blue because of a type of antioxidant called anthrocyanin. Most anthrocyanins in blue berries are broken down by the time they reach the colon, so kids with blue poo will either have consumed quite a lot or the berries are moving quickly through the gut.

Children with diarrhoea have a very rapid gut transit and stools often come out the same colour as the food that went in. 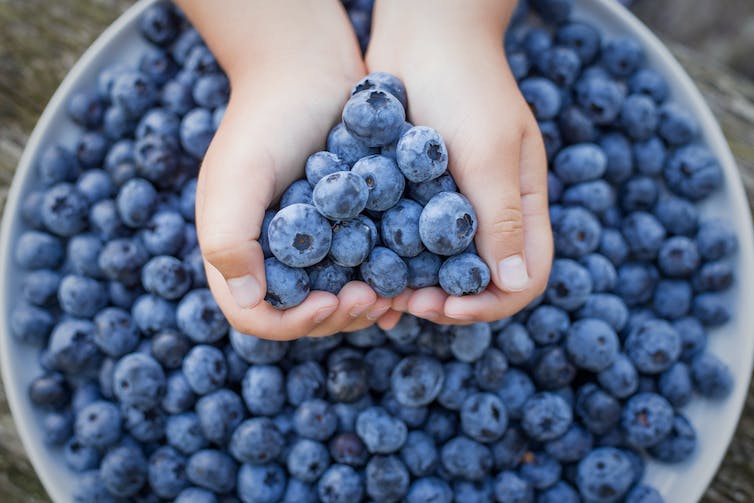 Orange stools can be due to beta carotene, a compound found in particular vegetables such as carrots and butternut pumpkin.

Poo can also be orange because of the effects of antacids containing aluminium hydroxide, a naturally occurring salt.

Yellow-coloured poo is often normal but a greasy, foul-smelling yellow stool that floats on the toilet water can mean it contains an excess of fat.

Occasionally, this can arise from conditions such as undiagnosed coeliac disease, where the immune system reacts abnormally to gluten and the small bowel doesn’t properly absorb fat.

Abnormally pale or clay-coloured stools can indicate a blockage of bile from the liver to the small intestine. This means it doesn’t go through the last stage of getting its brown colour, through the addition of stercobilin. This results in poo having a very distinct pale cream appearance.

One in 14,000 Australian babies are born with a condition called biliary atresia, where the bile ducts outside and inside the liver are scarred and blocked. Bile is unable to flow out of the liver, which can lead to liver scarring. Biliary atresia can be treated with surgery but early diagnosis is important.

Pale coloured poo may also indicate the presence of an intestinal parasite or bacteria.

Red poo could be due to red food colouring, tomato juice and beetroot. 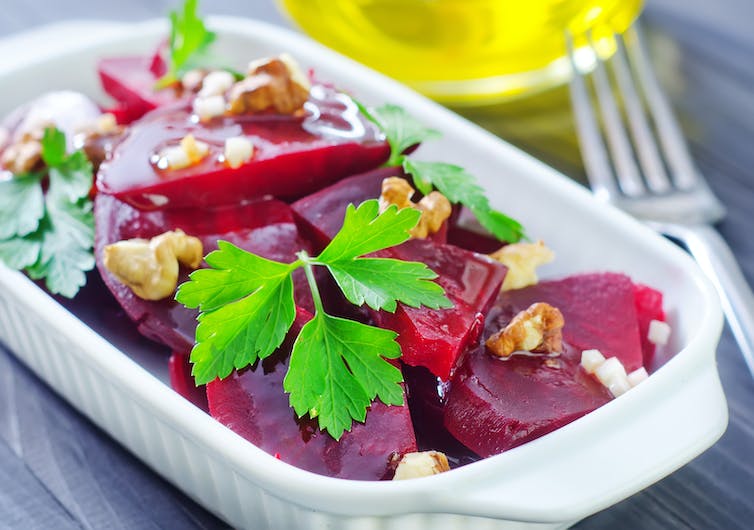 Last night’s beetroot salad could be to blame. Gayvoronskaya_Yana/Shtterstock

However, bright red blood in the poo usually means internal bleeding from the bowel.

Read more: Your poo is (mostly) alive. Here's what's in it

There can be a number of harmless causes for black poo such as eating black licorice.

Medications are another reason. Iron tablets and many antibiotics can turn poo black. (Antibiotics are also known to turn poo into different shades of green, white, pink and orange.)

Black, tar-like poo can indicate bleeding from higher up in the digestive tract, such as from an oesophageal or stomach ulcer.

Changes to the colour of your poo are usually temporary. Getting rid of the culprit – by finishing the medication or removing the responsible food from the diet, for instance – should be able to return poo colour to its normal shade of brown.

If the odd colour persists, it may signify an underlying medical condition and warrant further investigation.

Black, red and very pale poo are the more concerning colours and should be checked out by your GP.