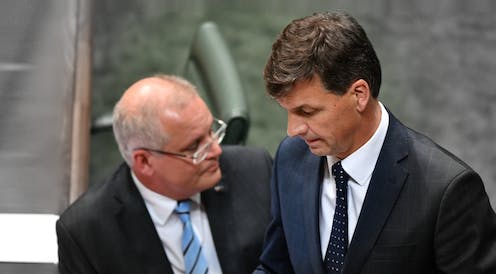 Scott Morrison said it with a straight face, and repetition for emphasis. “I’m very pleased, very pleased, with the performance of all of my ministers,” he declared on Thursday.

This ringing if unconvincing universal endorsement came as the unfortunate Angus Taylor wallowed more deeply in his mire, which this week took a bizarre turn.

Controversial American feminist writer Naomi Wolf, in an extended phone call (which she videoed) with a Taylor staffer, demanded a correction from the energy minister for his inaccurate claim they’d been corridor near-neighbours at Oxford in 1991 and for implying she’d campaigned against Christmas.

This story went back to Taylor’s maiden speech. In that, he mentioned Wolf, then segued to students (without naming her) who opposed having a Christmas tree, against whom he and his “mainstream” friends successfully “pushed back”.

Wolf wasn’t living at Oxford then, says she enjoys Christmas, and, being Jewish, accuses Taylor of anti-Semitism.

In her video Wolf (who’s had her own problems with accuracy in her writings) was unrelenting, refusing to be deflected by the staffer who happened to pick up the office phone very late at night.

In parliament on Thursday Taylor insisted he’d met Wolf at Oxford and declared that, given his grandmother was Jewish, her accusation of anti-Semitism was “deeply offensive”.

Taylor also argues he didn’t say she was one of the anti-Christmas brigade. But he did leave that impression.

It appears another case of Taylor being sloppy with facts and refusing to clean up his mess quickly, or at all.

In a rational political world, Morrison would use the opportunity of the extensive restructure of the public service he announced on Thursday for a shake up of his ministry early next year, enabling him to move Taylor, who struggles in his portfolio as well as being permanently stuck to fly papers of his own creation.

But under questioning at his Thursday news conference Morrison indicated he had no reshuffle in mind.

It is a missed opportunity, however Morrison would rather live with a problem minister in a key post than give a scalp to Labor. That’s assuming the NSW police clear Taylor over the alleged “doctored” document he used to make false claims about City of Sydney councillors’ travel.

While the Taylor saga became messier, the government did manage to achieve its desire to end the parliamentary year with a significant legislative win, achieved by an unrelenting effort to persuade crossbencher Jacqui Lambie to vote for the repeal of medevac.

Morrison’s personal involvement in the Lambie negotiations was a mark of how important this was to him. His commitment to medevac’s demise was out of proportion to the issue’s significance. Medevac had been imposed on the government during that brief pre-election period of minority government, and the PM was determined to reverse the defeat.

What it took to secure Lambie’s vote neither she nor the government will reveal (the speculation is it involves a commitment to pursue the New Zealand resettlement option at some later point).

Read more: Explainer: the medevac repeal and what it means for asylum seekers on Manus Island and Nauru

This secrecy is disgraceful. Morrison is reinforcing the image of a government contemptuous of transparency. Lambie’s hiding behind “national security” is unconvincing, as was her emotional performance in the chamber.

Given her tiny electoral base (she won the last Tasmanian Senate spot), she has immense and disproportionate power in this parliament. For her, that is the luck of the Senate voting system. Under any notion of accountability, she has a duty to disclose to the public the back stories behind her decisions.

Regardless of its consequences and what it says about various players, the medevac repeal will fade soon from the public mind. Wednesday’s national accounts are another story. They reinforce the message that the Australian economy is caught in sluggish growth, creating serious concern for the coming year.

Business is cautious about investment. People have saved much of their tax cuts. It’s their choice whether to spend or save them, the government says, but the closed wallets flatten the numbers.

On Monday week we will see the revised economic forecasts in the budget update, and the latest estimate of the surplus. Thanks to high commodity prices, low growth can co-exist with a good surplus (although the government has done some spending since the budget).

While so much of our political debate is superficial, dominated by “spin” and the exchange of abuse, this week brought sharp reminders of Australia’s urgent need to do better on the fundamentals.

Read more: GDP update: spending dips and saving soars as we stash rather than spend our tax cuts

The national accounts showed annual productivity growth is negative. On another front, Australia’s results in the OECD’s Program for International Student Assessment (PISA) should be galvanising. Our school students are doing poorly on the basics and have gone backwards over recent years, despite substantially increased school funding.

Australia needs to lift its game in many areas, but our political debate is so dominated by point scoring, hyper-partisanship and the knee jerk reaction of interest groups that policy discussions have become like quicksand, as treasurer Josh Frydenberg found when he recently canvassed older people working longer.

The parliamentarians have departed Canberra exhausted from a year bifurcated by the election; they return to voters often contemptuous of them.

Immediately after the election, the commentary said the Senate would be much easier for the government than last term, and that still holds. But Pauline Hanson is brittle and Lambie can be fickle.

Landing legislation with them will often involve a lot of palaver. After last week’s debacle when Hanson sank the ensuring integrity bill, industrial relations minister Christian Porter reintroduced it this week and the government pushed it though the lower house at top speed by stifling debate. Another attempt to have it passed in the senate is a task for the new year. Next time Lambie will be heavily courted.

Morrison had hoped to have the religious freedom legislation introduced by now, but that proved impossible, after arguments broke out on all sides. Delay won’t solve the problems.

And we are yet to see specifics of the PM’s stated desire to pursue environmentalists who urge boycotts of resource companies.

Despite the embarrassment around Taylor and other difficulties, especially the economic uncertainty, Morrison is comfortable at the end of the parliamentary year.

He will go into next year in his own bubble of personal confidence that does not admit error or allow for self doubt. That might fireproof him, or it might mean he gets burned. Whether he can learn to be a good prime minister is the big question for 2020.