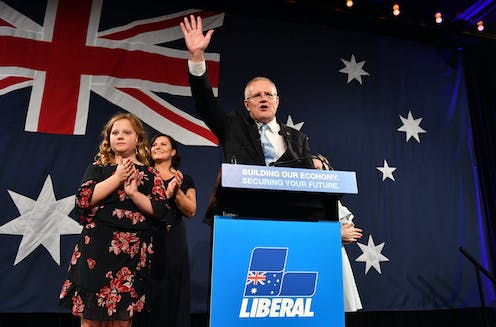 The Australian National University’s election study has underscored the woeful lack of trust voters have in the political system, and highlighted the role economic issues and Bill Shorten’s unpopularity played in the May poll outcome.

The Australian Election Study, done after every federal election, has found trust at rock bottom levels. Only 59% are satisfied with how Australian democracy is working, the lowest level since the late 1970s - the figure was 56% in 1979 - and down 27 points since the record high of 86% in 2007.

Just one quarter of Australians (25%) believe people in government can be trusted, the lowest level on record. More than half (56%) believe government is run for “a few big interests”; only 12% think it is run for “all the people”.

The AES, which has been conducted since 1987, surveyed 2179 voters after the election. The full report can be found here. The results on trust confirm the message about voter disillusionment found in other studies.

Two thirds of voters were focused on policy issues in casting their ballots, according to the study.

The most important issues identified by voters were management of the economy (24%), health (22%) and environmental issues (21%). Voters preferred the Coalition on economic management, tax and immigration, and Labor on education, health and the environment.

The survey found Shorten was the least popular leader of a major party since 1990.

In contrast, Scott Morrison was the most popular leader since Kevin Rudd in 2007, scoring 5.1 on a zero to 10 popularity scale (this compared with Shorten’s 4.0). But nearly three quarters (74%) of voters disapproved of the way the Liberals handled the 2018 leadership change.

The study shows the high voting volatility of the modern Australian electorate – in 2019 fewer than four in ten (39%) said they had always voted for the same party; in 1967, this figure was 72%.

The study identifies three factors as shaping the 2019 election outcome.

First, economic management and tax were key issues, working to the Coalition’s advantage. Second, Shorten’s unpopularity cost Labor significant votes. “There was a wide gap in the popularity of the two leaders and this is reflected in voter behaviour with very few voters being drawn towards Labor based on leadership alone. Moreover, voters’ lack of trust in Shorten also fed into scepticism about the impact of Labor’s economic policies,” the report says.

Third, while the environment was a major issue and one on which voters consistently favour Labor, “this issue on its own was not enough to shift the election in Labor’s favour by outweighing the disadvantages it faced on economic policy and leadership”.

The AES’s lead researcher, Ian McAllister, said the findings did not support the argument some commentators were making that a political party could never win with a policy of significant change to the tax system. He said Labor’s problem was not so much its radical tax package as its inability to convince voters the tax changes would make the national economy more prosperous.

The latest AES found some notable differences on gender, age and other characteristics.

A growing divide has shown up between younger and older voters. “The 2019 election represents the lowest Liberal party vote on record for those under 35 (23%) and the highest ever vote for the Greens (28%)”.

There was a strong association between ownership of assets, such as property and shares, and a higher vote for the Coalition.

This year’s election recorded a paradigm shift in the role of media: it was the first in which following the election on the internet outstripped all other media sources including TV.

On issues, there is strong support (80%) for indigenous people to be recognised in the constitution, but support for Australia to become a republic is at a record low (49%).

McAllister said the findings on trust were a warning that politicians needed to do better in representing and gaining the confidence of voters.

“There is widespread public concern about how our democracy is under-performing,” he said. “I’ve been studying elections for 40 years, and never have I seen such poor returns for public trust in and satisfaction with democratic institutions”.

In a speech on Sunday Labor frontbencher Tanya Plibersek said trust was the “mother’s milk” of democracy, and emphasised the role of politicians in the battle to restore it.

“Around the world, democratic societies are fracturing. Institutions and norms that once felt unchallengeable now appear fragile. Trust in politicians and political parties has never been lower.

"The public arena we enter every day, so quick to descend into insult and vitriol, compounds the feeling among ordinary citizens that getting involved in politics is pointless – that the public sphere is a nasty place, best avoided,” Plibersek told a Chifley Research Centre conference.

“Populists exploit this feeling, filling the vacuum with simplistic solutions to complex problems. When these inevitably don’t work, it only frustrates people more. It’s a vicious circle, reinforcing the conviction that democracy is broken and that genuine improvement is impossible.

"Everyone involved in Labor politics understands our urgent mission to restore confidence in our party and in our movement. But even more importantly, we need to dedicate ourselves to rebuilding trust in democracy itself.

"We need to reassure people that democracy is worth defending. Not just because it’s better than the alternatives, but because it’s the best vehicle for actively delivering a better quality of life for everyone.

"This will require effort and dedication from all Australians. But the greatest effort should rightfully come from those who have done the most damage – politicians and the political class”.