Imagine your child asked you “When did grandma die?” and you could only respond “It was probably a while ago, but it could have been quite recently.” Most likely your child would be unsatisfied with the reply.

This has been our situation regarding the ancient human species Homo erectus. We know these distant cousins of modern humans were alive almost 2 million years ago, but when did they die out? Probably a while ago, but perhaps quite recently.

A key site in our understanding of Homo erectus, at Ngandong, in Java, Indonesia, has until now defeated all attempts at reliable dating since it was first excavated more than 90 years ago.

With the aid of new techniques, we have now found that the Ngandong Homo erectus fossils are the most recent known specimens, dating from between 117,000 and 108,000 years ago.

This discovery will help us understand where they sit in the evolutionary tree, who they interacted with and why they became extinct.

Read more: A snapshot of our mysterious ancestor Homo erectus

In 1931, a team of Dutch archaeologists made an unbelievable discovery at Ngandong when they unearthed 12 skulls and two leg bones of Homo erectus. Finding even one fossil human skull is remarkable, but finding 12 together is almost miraculous.

Other Homo erectus skulls have been found in Java and elsewhere, but the ones at Ngandong have the largest brain size and highest forehead of any of them.

This indicates an important evolutionary change, and knowing when it happened is crucial to our interpretation and understanding of these ancient cousins.

However, the nature of the site – where the fossils were buried in a deposit of sediment close to the Solo River – makes it difficult to determine how old the fossils are. Many attempts have been made to establish a timeline for the site, but until now none have been very successful.

In 1931, when Ngandong was excavated, archaeologists relied heavily on the estimated age of the associated fossil fauna to date the Homo erectus remains.

By 1996, better dating techniques such as electron spin resonance and uranium-series dating were available. A team led by American geochronologist Carl Swisher applied these techniques to ancient buffalo teeth found at the Ngandong site.

Using the buffalo teeth dating, Swisher claimed that Homo erectus survived as recently as 27,000 years ago. This would overlap with the arrival of our own species, Homo sapiens, in the region. 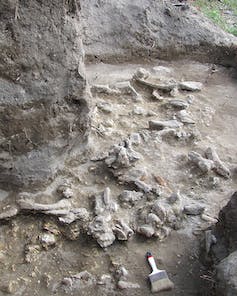 However, examining the plans from the original excavation revealed the Dutch team had dug up and reburied an enormous area of ground. It turned out the buffalo teeth Swisher dated came from an area that had already been excavated and buried again.

This meant they could not have come from the same layer as the 12 Homo erectus skulls, so their ages were not related.

Despite the issues with Swisher’s dating, the theory that Homo erectus survived so recently has persisted in the literature and our understanding of Ngandong since 1996.

In 2011, at team led by Indonesian researcher Etty Indriati re-dated the site and obtained ages between 130 and 500,000 years. But again they focused mainly on dating the non-human fossil evidence and ignored the sedimentary context.

Consequently, the age range is too wide to provide much help in reconstructing the evolutionary significance of Ngandong.

Recently, we were part of a team of Indonesian, American, and Australian researchers led by Yan Rizal who tried a different approach. We worked on an understanding that the site is in a river deposit that is part of a sequence of floodplain steps called terraces.

Our study was based on how the Solo River system was created (landscape context), how the terraces were formed (terrace context), and how the fossils were deposited (fossil context). 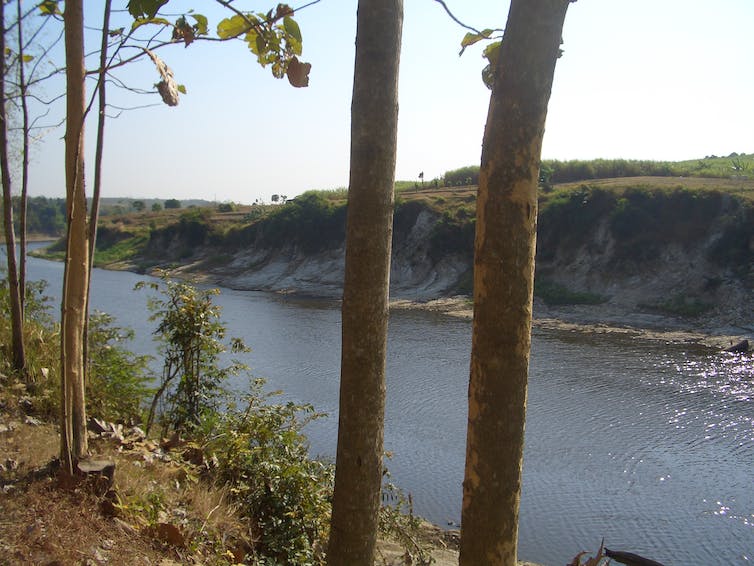 To do this we first dated when the Southern Mountains in Java were formed – to define when the Solo River was diverted to the north to form the terraces. We then dated the sequence of river terrace sediments using a technique called optically stimulated luminescence dating, which provided the first ever sedimentary age for the site.

Finally, we conducted extensive excavations at Ngandong in carefully selected areas using maps from previous excavations. These new excavations revealed the same bone bed found by the Dutch in 1931 and provided evidence directly associated with the human fossils that could also be dated.

The analysis resulted in 52 new ages that were modelled to precisely define the age of the original bone layer to 117–108,000 years ago. This is the youngest reliable age for Homo erectus in Indonesia, and the last appearance of Homo erectus anywhere in the world.

At this age, Homo erectus would not have encountered Homo sapiens, but they may have met other now-extinct human species such as the enigmatic Denisovans. First discovered in the cold caves of Russia, the Denisovans are mostly known from traces of their DNA in modern humans rather than actual fossils. The Denisovans might have been distributed as far as Southeast Asia.

The new age range now raises important questions about the interactions between the Denisovans and the Ngandong Homo erectus. Could interbreeding with Denisovans be the source of the evolutionary change and larger skulls in this late Homo erectus population?

This possibility is yet to be proven. But it is clear that this improved age for the Ngandong Homo erectus has opened new lines of investigation that can provide a window into understanding the complex world of human evolution.

We are finally ready to get to know our extended family.